A bit more about our Geopark 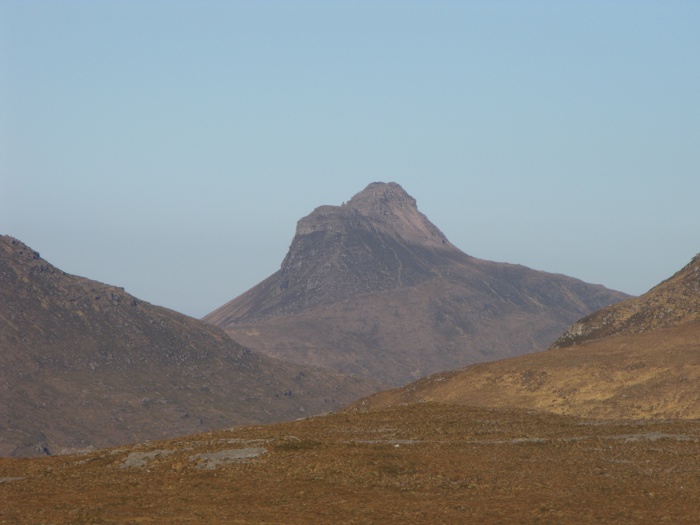 Last week, I mentioned that there was going to be another meeting, this time in Elphin, as part of the travelling Geopark Roadshow. This meeting was to start at about 11.30 in the morning, and as I tutor Gaelic on a Thursday morning, I arranged with Donald that I would come along for about 12.45. He said that would be fine as I would only miss the part of the talk which I had already seen in Lochinver – and as I crept in quietly, I found that this was indeed the case. Donald finished his part of proceedings soon after I arrived, finishing with the same slide with which he had finished his previous talk – a picture of a rather amusing emu seen on the side of a coach in NZ! 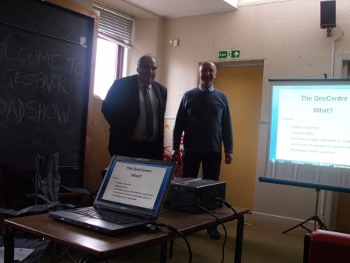 After a few questions had been dealt with, an excellent lunch of well-filled rolls and salad, followed by cakes, biscuits, tea and coffee was served – always an essential part of such proceedings! The old school room in Elphin is not particularly big – during the years when my friend from the choir, Susan “KLB”, attended the school “back in the day”, there was a maximum of 12 pupils. For this meeting, we could have squeezed in two or three more people without discomfort, but the turnout for mid-week and during the day was pretty good and included a young lass and her baby brother – with their Mum of course. Funds had been raised for all these meetings which had been held in the various communities which fall within the Geopark, but as I said last week, that is as far as things have gone money-wise, although the steering committee is working very hard to raise enough money to employ a Director to take things on from here – the idea being that a company with charitable status and limited by guarantee would be set up. We were promised that the decision on exactly what form this would take would happen sooner rather than later. 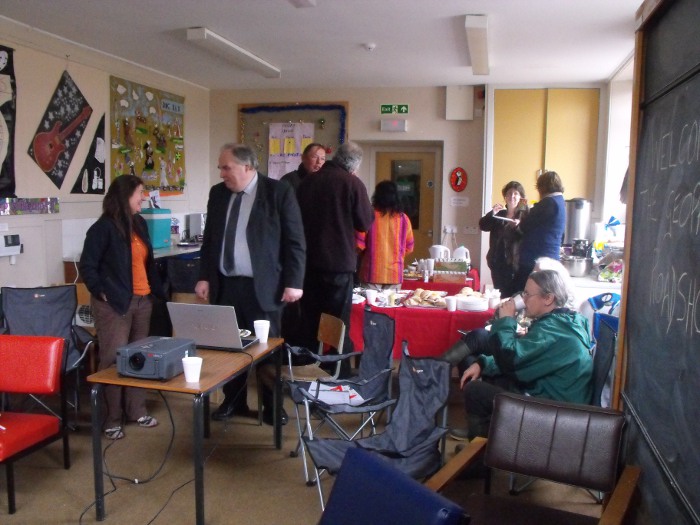 Donald had already spoken in his talk about Knocken Crag – which is just now our de facto Visitors’ Centre, although the site is owned and run by SNH as I said last week. It is a brilliant place – I visit it often, mostly to use the loo on my way down the road!! I would think it is probably the only visitors’ centre in the whole world which boasts a turf-roofed facility It is open all the year round – as is the whole centre – and is, like all Highland loos (and I have visited most of them!) always spotlessly clean – the water in the pan might be a bit of a funny colour, but that is just the peatiness of the water as it comes straight up from the loch on the other side of the road – Lochan an Ais. Along a path and above the building which houses the loos is an interactive centre – also turf-roofed and which is solar powered. It is open to the elements, but houses an amazing amount of information about geology: Moine Thrust, Peach and Horne, etc. It is especially good for children but fun and informative for people of all ages. I have spent quite a few happy hours when taking our visitors up there to play 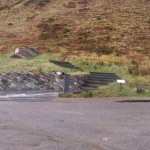 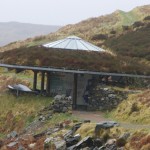 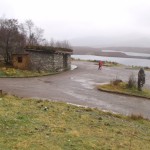 The path goes on up the hill, and I have walked it but that was some years ago. I hear tell that the path has been renovated recently – I know the whole area was closed to the public the winter before last when they put in a state of the art bit of fencing to keep the rock from falling – which I found pretty inconvenient!!! But I think there has been a lot of improvement and refurbishment done in recent years, and more bits and pieces set up for the interest of visitors. I really should go and have a look for myself! The view from Knocken is stunning – Beinn Ghòbhlach and Coigeach to the left, Cùlthain Mòr and Cùlthain Beag to the right and the iconic Stac Pollaidh opposite. I never get tired of that view whatever the weather.

But there are plans afoot for a purpose-built Visitors’ Centre for the Geopark. George took over the proceedings at this point as it has been more his remit and he spoke about the difficulties involved in finding a suitable site. The main problems seem to have been with bringing the various landowners on board – or sometimes simply just not knowing who the land might belong to, which does happen up here! George reported that, for once, all the Community Councils involved are now in agreement as to the preferred location for this project – which is in Scourie. George showed us a picture of the site which lies down the road to the beach – a turning off the main road north, so it is pretty accessible. There has to be room for a car park of course and for possible expansion in the future, and this site meets these criteria. The landlord and the community are in favour and as the site is almost slap in the middle of the Geopark, it would seem absolutely ideal. Not only that, but there is a depth of soil there, so it shouldn’t need vast amounts of rock clearing before building starts – something which is more common than not round here and is very expensive to do! Funding had been raised for a consultation to be done for this, and I feel that was well-worth the money as everyone seems to be very happy with the results.

Although no plans have been drawn up yet as to how the building would look, George was able to describe the sort of building it was likely to be. Something very in-keeping to the surrounding countryside and other structures is essential. In his talk, Donald had had many slides of buildings in the various Geoparks he had visited and they were certainly very impressive, mostly ultra-modern in concept and for the most part, very attractive – but not suitable for here at all! We are looking for a low carbon-footprint within a traditional design, but at the same time modern enough for the needs of all who come to visit. It is hoped that there would be a café and possibly a wee shop selling locally made crafts, plenty of information for the visitors but also up-to-date notices of things happening in the area for locals and visitors alike. 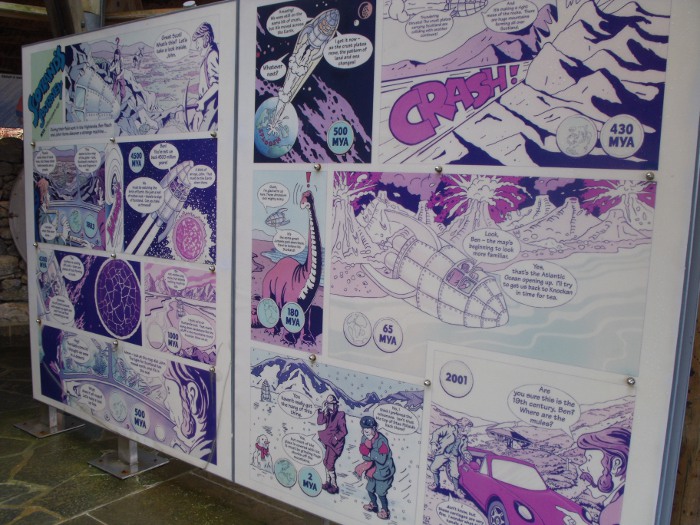 One real hope in the long term is that the Centre would house the Shelley Collection. This is a huge collection of rock samples – some now rare as the relevant countries no longer allow the export of the rock. The collection was made by a man who lived locally, but is now in Golspie on the east side of Sutherland. We would love to bring the collection home to this part of the world and the family of the late Mr Shelley would love it to be housed here for the benefit of all. Having the collection in the Centre would certainly give people plenty to do inside if the weather was too bad to be comfortably outside!! Donald brought along a few samples of the collection – and superb they were. The wee lass was encouraged to touch the samples and you could see on her face the effect the feel of the rock was having on her! This would form an important part of displaying the collection – it would not be locked away in glass cases.

One important point about this whole exercise is that it will create jobs in this area – both in the centre itself and two or three new properly trained rangers to take people on guided walks.

We have had disturbing reports recently that the advice frequently given to the million or so people who visit Inverness during the year is that it is not worth going north as “there is nothing there”! Needless to say this pleases no-one – particularly those who work in the tourist industry to the north of Inverness – and we all feel that Visit Scotland must be brought to realise that there is plenty to do “up north” and that our Geopark is the Jewel in the Crown. We already get regular parties of students from the various universities coming to chip away our rock – maybe hoping to find a garnet or two! We see them in groups by the roadside – sometimes huddled together like emperor penguins in an Antarctic winter, and sometimes sunning themselves on the very rocks they are supposed to be studying – but now we are hoping to attract many more visitors interested in the landscape and all that goes with it.

As John Hutton (18th century geologist and polymath) wrote in a paper of 1788 “The result, therefore, of our present enquiry is that we find no vestige of a beginning and no prospect of an end” – a quote which George used to finish his part of the presentation and which certainly seems appropriate to this endeavour…

This entry was posted in Landscape, Local area and tagged Geopark. Bookmark the permalink.

One Response to A bit more about our Geopark