A good week draws to a close

After a long and interesting day out on Sunday, you might have thought that Monday would have been a bit flat – but not so as there was a cake to bake for the Dancing Club party that evening. Being of a gluten-free persuasion, and liking the idea of being able to eat something at the party, I opted to make a Spanish orange and almond cake – a recipe which I had never tried before but it seemed fairly straight forward, so I decided to have a go. It was the first time I’d tried baking a cake in the new Halogen oven which our son had bought us as an early Christmas present – and I have to admit that the baking did not go all that smoothly 🙂 A word of warning to anyone who wants to try such a thing is that as the Halogen oven cooks a bit like a microwave, the middle cooks more quickly than the edges!! I had to put the cake back in the oven twice as when I tried to remove the spring-form tin, I found the cake wasn’t cooked! In the end, I decided that discretion was the better part of valour and finished the baking in the conventional oven – whereinafter it turned out perfectly well and was enjoyed by all – including my Old Man, who wasn’t at the party but enjoyed the left-overs! 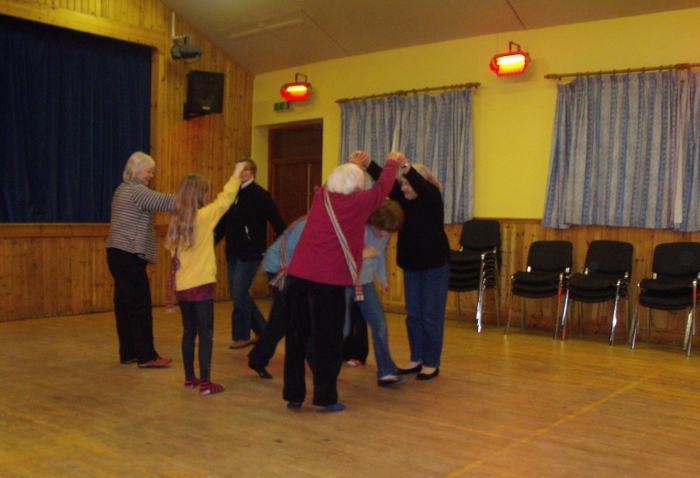 The party was billed as a “not to be missed” event in the Assynt Festival calendar with “fun for all the family”, so it was with some feelings of trepidation that I opened up the Village Hall and started setting things up, soon joined by other members – some of whom were also not a little concerned that there would be enough people turn up to make the evening go with a swing. We need not have worried as between 26 and 28 people came into the Hall to dance that evening, including some holiday-makers and some youngsters. We had decided to provide food but not booze – for one thing, we reckoned that most folk would be driving one way or another – but the fact that this event was “dry” didn’t stop anyone having fun. Helen worked very hard teaching the steps of the various dances and it was brilliant to have three sets of eight people for once – there was only just enough room in the Hall!! The evening most certainly turned into one “not to be missed” and some people have even been kind enough to remark that it was the best event of the Festival – although I personally wouldn’t go quite so far as to say that!

Next day, I was busy preparing food again, but this time it was just filling a few baps with cheese for the talk at 5.00 pm that afternoon hosted by the Field Club. On Monday, Andy Summers, our hard-working ranger, had given a talk on the whales and dolphins to be found around our shores, and about 20 people had filled the Community Room for the talk, which Helen had told me was really interesting. I don’t know whether there was food provided for that event, but Lyn had asked me if I would help out for the Tuesday meeting, which was to be a talk given by Tony Mainwood on that other iconic bird of the Highlands – the tiny twite. Andy had quite rightly said when the Festival was being organised that he wanted to see the wild-life of the area at least represented, and thus it was that these two talks were scheduled. The original plan for Tuesday was for a talk on eagles and ospreys and the tracking thereof, but the chap who was to give the talk had to pull out at the last minute, and Tony Mainwood stepped in.

You might think that we were all fearfully disappointed to have to swap big, impressive birds of prey for the tiny, seed-eating twite – but not so! This wee creature is pretty iconic – it is fairly rare with most of the population living on this north west coast – there is also a small population in a part of the Pennines, where they are working hard to reintroduce them. Twite, which is a bird a bit bigger than a siskin and a bit smaller than a sparrow and which looks rather like a linnet at first glance – are quite fussy about their requirements. They like to nest in rocky escarpments but need meadows full of the right sort of flowers on hand to feed their young because they are unusual among small seed-eating birds in that they don’t feed them insects – they are completely reliant on specific flowering plants, which is probably one reason why they are rather uncommon! However, for some reason they are rather fond of Andy’s croft, and for the last few seasons he and Tony, having tempted the birds in with rape seed, have managed to catch and ring a good number of them – all very important work to help ensure this tiny bird’s continued existence. I very much enjoyed the talk, and the refreshments afterwards went down well. 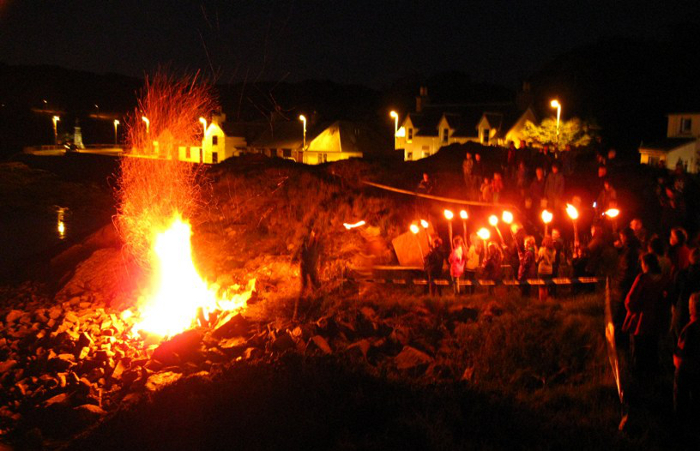 And thus we came to the last day of the Festival which ended with a torch-light procession, bonfire and firework display. I managed without too much trouble to persuade Chris to come with me to this and it was a perfect evening for such an event. When we arrived, there were already quite a few people foregathered at the appointed place, and the fire engine turned up shortly afterwards – I guess that was a “health and safety” requirement. The flaming torches were rather ingenious devices comprising old tins attached to birch boughs and were handed out among the people there, mostly to those children deemed old enough. We then paraded down Main Street to the Bay View car park where there was a good bonfire burning on the beach. By this time, there were quite a number of people – mostly from Lochinver itself, although there were some from places further north. We joined our friends, Julie and Howard, and found ourselves a vantage point from which to watch the fireworks, which were to be let off from the end of the mole. The torches were ceremoniously thrown on to the bonfire and the last one was the signal for the display to start. It was a good show – I gather a chap had come up from Edinburgh to do it for us – but there was one major difference between a display such as this in Lochinver and one in other parts of the world. Twice it had to be halted to allow boats to pass the end of the mole – not something which would happen in the middle of Edinburgh or London!! Then it was home to a most welcome cup of hot chocolate…

The fireworks made a fitting end to what I personally consider to have been a most enjoyable and successful week of activities. We had been incredibly lucky with the weather – for the most part it had been dry and sometimes even a bit sunny with few showers and no wind – quite unusual for the start of October in these parts – the very next day, it started raining and didn’t stop for two days! The organisers had worked so hard on this project they deserved decent weather and after all was over, I received a round robin e:mail from Gordon Sleight – who was the Main Man for all of this – saying that he felt it was a good start! There are people locally who feel – not unreasonably in this time of austerity – that it was a total waste of money, but the whole idea behind it was to try in some measure to provide something for the future of the area which might over time grow and provide employment – or at least attract a few more visitors into the area at the end of the summer. I hope this doesn’t turn out to be the first and last such Festival, and that we can look forward to them for years to come. 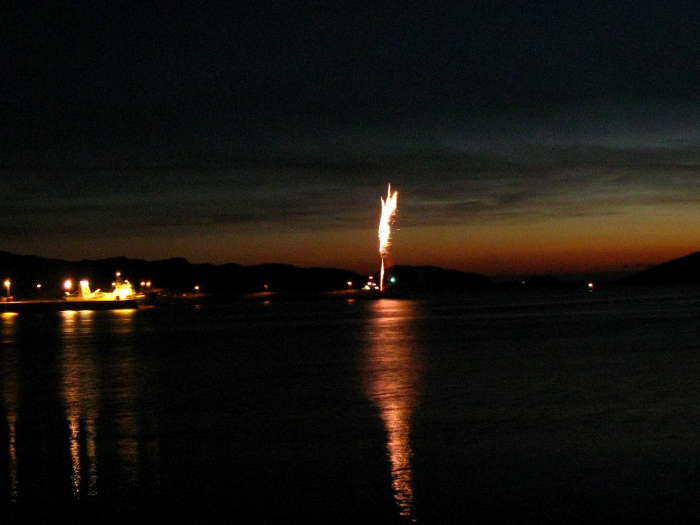 [Photos credits: of torches and fireworks by David Haines; twite by Hilary Chambers; dancing by Clarinda]

This entry was posted in Local area, Social events and tagged Assynt Festival. Bookmark the permalink.