A long but interesting day out

On my way home on Friday afternoon after the opening ceremony for the Tree Nursery, I called in on the Craft and Produce Market which had been going on throughout the day in the Village Hall as part of the Assynt Festival. They were packing up to go home, but there was time for a few minutes’ chat with the people who were there – enough to discover that the day had gone reasonably well for them, with a number of folk “through the doors”. A Findings session relating to the archaeology had happened at one end of the hall which had increased the numbers of people looking round, as had a meeting of CALL which took place in the Community Room. Stella told me that as far as she could tell, it was the produce side that had done better this time with the sale of jams, chutneys and fresh vegetables being quite brisk. It was similar at the auction in the Produce tent on Games Day when good prices were being paid – there is no doubt that fresh home-grown and home-made produce is always popular! 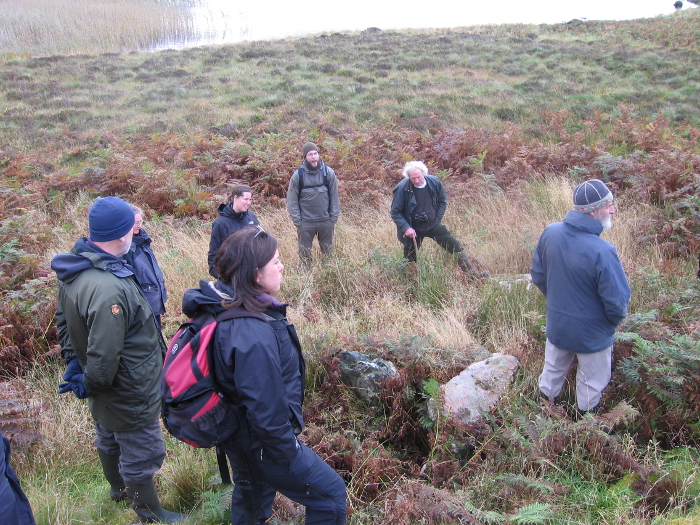 I took a day off from the Festival on Saturday so that I could be fresh for what could well be a long day on Sunday. We were meeting at Loch Borralan, just down the road from the Altnacealagach Inn, to go and see the chambered cairns in the area which are at various stages of investigation. I had considered going as I have been interested to see the cairns, but wasn’t that keen on going on my own – but Gwen also wanted to go and so we went together along with her cocker spaniel, Storm. This walk was advertised as “Heritage Trail 3” and was due to run from 10.30 am through to about 3.30 in the afternoon. By now I had a camera to use as our elder son, Robert, had kindly sent me his on loan so that I wouldn’t be without until mine is repaired. The day dawned pretty fair for the beginning of October, and there were already quite a few folk in the roadside car-park when we arrived, and 18 of us in all set out on our voyage of exploration.

Jorine, who runs the youth hostel in Achmelvic, welcomed us to the walk. The plan was to visit an unexcavated cairn first, and then move on to the one which had been dug both in the past and in the last couple of years. Gordon Sleight was there to give us all the gen on archaeological and historical matters and Bill Richie for the geology. I have heard since that there should have been someone else there to talk about the flora and fauna – but I think we were all glad that that person had failed to make it as there was so much to take in as it was!!

It was but a short walk to the first cairn, and I have to say that I have passed the site on not a few occasions before without realising there was anything significant there – not surprising really because until you look closely at this grassy mound along with someone who knows what they are looking at, it is not very obvious that it is man-made – but when you do, it absolutely hits you in the face! The broken loose stones lying in a fairly regular circle on the top of the mound gives a reasonable clue to it being constructed by man rather than nature, followed by a very obvious passageway with entrance – all very over-grown of course but easy enough to see when it is pointed out! Then you uplift your eyes and look over to a matching lump of land a few hundred yards down the loch side, and lo and behold, there is obviously another! A matching pair… We stood for some time talking about this hump in the landscape, considering what might have been its use and what-have-you, but then moved off up to the cairn which has been excavated. 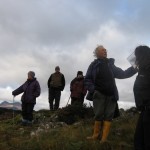 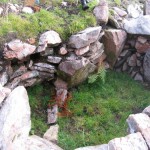 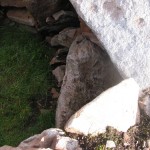 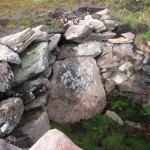 This was not a very easy task!! Jorine was carrying a paper sack, the reason for which became apparent when we found that we had to cross a wire fence – she used it to push the fence down enough for us to climb over. Then we had to negotiate quite a steep slope which was very wet and thoroughly poached by cattle – the crofter here has some very handsome Blue du Maine cattle, native to northern France but which do very well here as they are the original version of the breed, which has otherwise been mercilessly exploited by the commercial meat market in France. I didn’t have too much trouble getting up the way, but knew I would have trouble getting down – which in fact proved the case, and I had to be rescued by Mark the Postie with a helping hand and a walking stick! The struggle was worth it though, as the chambered cairn we found situated halfway up the hill was amazing. These structures are Neolothic dating back at least 4,000 years and there are forty of them in this area! The strange thing is that there is no sign of any Stone Age people actually living here – just these structures which are too small to have been dwellings and without any sign of a hearth. Maybe the people were nomadic and lived in tents – a theory, no more than that. Of course, over the 1,000 years that they are known to have been in use, the purposes to which the cairns would have been put would have changed over time. One of the first thoughts for most people when they see a cairn such as this would be that it was for burial, and indeed when it was first excavated in 1909 by a chap called Alexander Curle there were both bones and “pottery” found. Unfortunately, Curle didn’t record whether the bones were animal or human before sending them off to Dunrobin Castle where things tend to disappear for ever – rather like the Ark of the Covenant at the end of the Indiana Jones film!! Having done the excavation, Curle covered in the cairn, but it is now open in all its glory for people to see, and there is hope that a decent path can be made up to it to facilitate visits.

Bill explained that the stone used was Syenite which was taken from the hill behind – Cnoc na Sròine or Hill of the Nose (well more likely “headland” really:-)) Syenite is pink, especially when wet, and as the structure is reckoned to have been 10 feet high, it would have been very visible – and similarly the other 39 of these cairns! They are all sited facing south east where the sun comes up in mid-winter and just for once, I rather tend to agree with Bill that they must originally have had some religious significance. They are all built in a similar way to a ziggurat, with a progression of outer rings culminating in a dome, all of which is easy to see when pointed out by someone who knows! The entrance to this cairn is somewhat broken down, but again it is quite easy to see a passageway, a lentil and what was possibly a smaller outer chamber – all very intricate and stoutly built, and it has to be said that it has stood the test of time quite well!!

We had all been so deeply involved with what Bill and Gordon had to say that we hadn’t noticed that it was already nearing lunchtime, with a lot more planned for this walk! Once we had all managed to get safely down the hillside, it was into the cars to move over to Ledmore Junction. We parked on the drive which leads up to the marble quarry there and piled into just five cars as parking is in short supply at our destination, which was across the road at the house at Ledbeg. This had been built originally in the 18th century as the factor’s house – and was therefore two-storey with a tiled roof – but is now a “fixer upper” belonging to the Assynt Foundation. There we stopped for lunch before going on to the next set of things worth seeing – but as this post is already quite long, I will leave it here for this week and tell the rest of the tale in next week’s post… 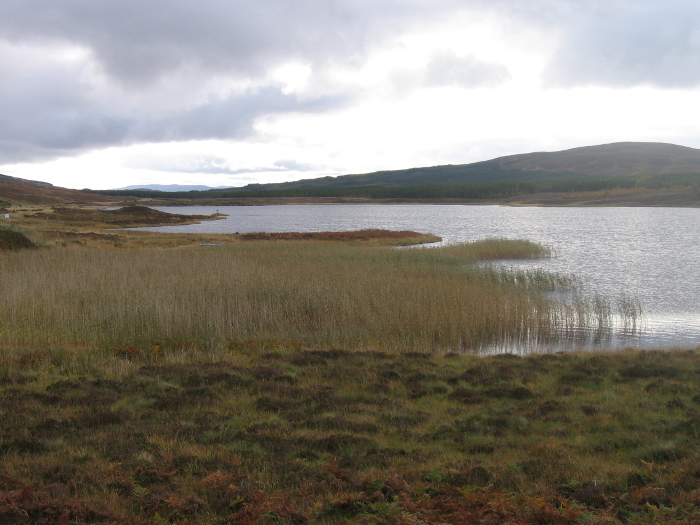 This entry was posted in Landscape, Local area and tagged Assynt Festival, cairns. Bookmark the permalink.