The road goes on… 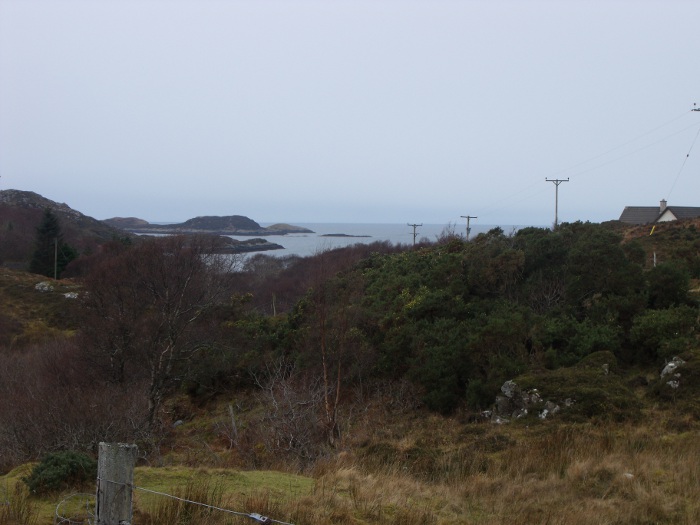 I was hoping to be able to report in some measure on a meeting held last week about plans for the future of Gaelic in this area but unfortunately, I was “proper poorly” as my grandmother used to say and so was unable to be there, and so far I have had no reports on what was said or decided. I also missed the Gaelic poetry/song evening, but have heard that that was a great success and that similar events are definitely to be regular features in the local calendar – the next being scheduled for the 15th March and I am really hoping to attend that. It is planned that the next meeting will be held at the home of one of the few remaining native speakers of Gaelic in the area – a lady who is now getting on in years but who is more than happy to do everything she can to help bring the language back into the area. She is also a wonderful baker – her sponge cakes are so light they almost float – so I am looking forward to that evening for sure. I have also heard that the evening of opera in the Village Hall was not only well attended but also very much enjoyed by all… 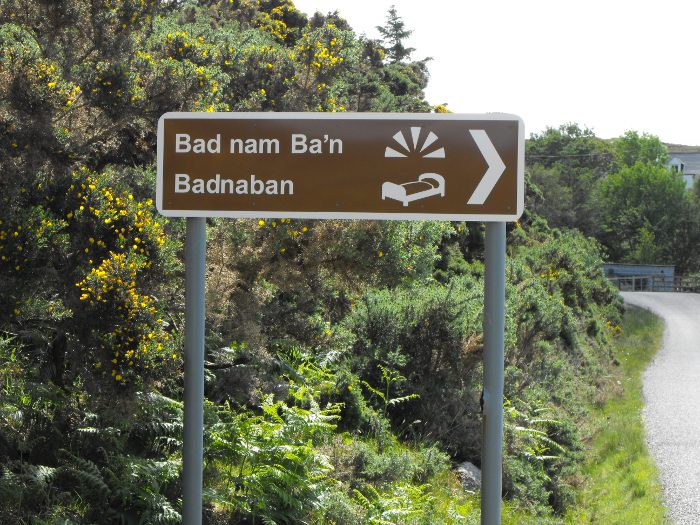 So for this week, I think we have no other choice than to continue on our travels down the road. We had arrived at the turning to Badnaban I seem to remember – a turning I frequently take as this is where I go to receive tuition on the small pipes. Badnaban itself is again somewhat strung out along the road with two houses on the other side of the turning to the Van Gorans’; a fork to the right leading to no. 19; then to the left going up a steep hill to where my friend Tina used to live until she left the area a couple of years ago. Then you go on down the windy road and past the house where my tutor, Sandy, lives with his wife, Ann, on the left and Jean and Ronny on the right – another house with a lovely garden and some superb flowering shrubs. By this time the road has become very narrow and enclosed going down towards the bay and I guess that is why it is also quite woody – the trees overgrowing the road. Just before you come to Sandy’s place, there is a wonderful little waterfall on the left of the road cascading down from near the houses on the top of the hill, and this burn continues to run down right by the road until it reaches the bay. This is one the many attractions of walking a road such as this – the song of water is a constant companion. 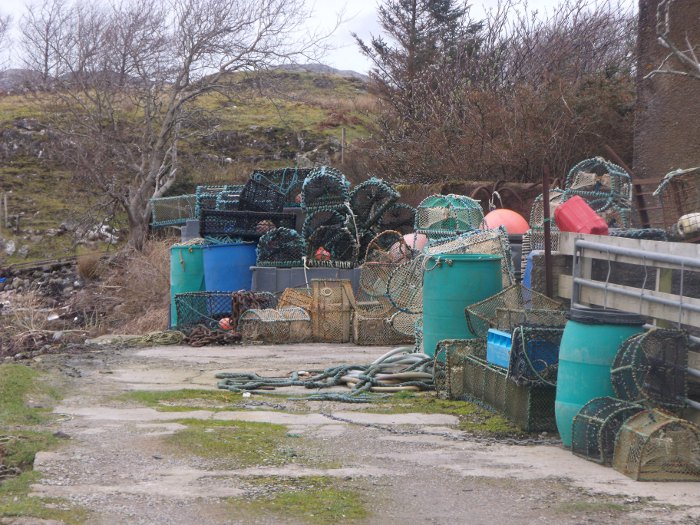 The road very soon opens out into a wee, very sheltered bay and there is a small group of very pretty mostly older houses, as well as a stack of creels and other such equipment pertaining to the few fishing boats that still use this bay. Although Lochinver bay, with its sheltered foreshore, has obviously been long used – evidently boat-loads of soldiers were landed there to assist with evicting people from their homes during the Clearances – I am sure the bay at Badnaban would have served all the local area as a harbour. As I said, it is small and very well-sheltered and you are very quickly out into the open water from there, unlike Lochinver which has a huge big bay to navigate before you are out to sea. Not that people did much fishing in days gone by, except from the beach or rocks, but the sea was still the great highway until very recent times as there were very few roads. In fact, the main road we enjoy now which takes us down to Ullapool and thence to Inverness wasn’t built until the 1970s – before then it was a single-track road similar to all the roads in the area, and before then I imagine there was just a series of drove roads (which still exist in places as tracks) for taking the cattle to markets further south. I am sure that sometimes it was quicker and probably a deal safer to go by sea! 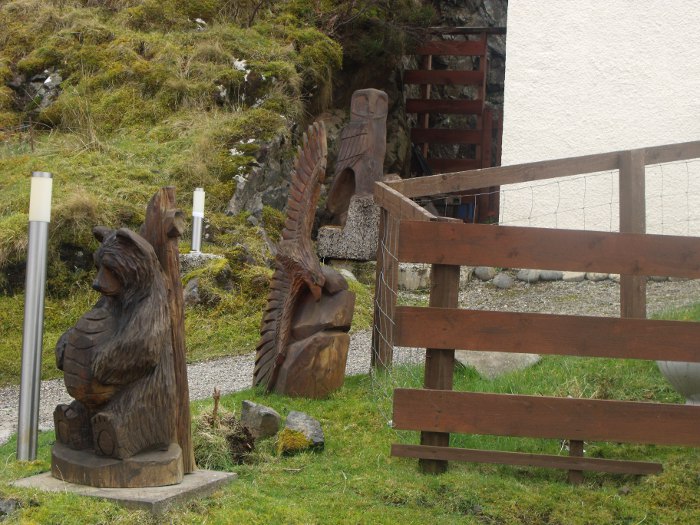 Anyway, I diverge… There is the usual mix of holiday and lived-in homes among the half dozen or so houses in Badnaban, and one of them is now notorious in that the only murder to have taken place locally in the last 140 years happened there three or four years ago. It was a “domestic” and a rather sad story, the details of which would be out-of-place here.

The name “Badnaban” means “Place of the Women”, or wives, and although I have always had reservations about the supposed origins of the name, I have no real reason to think that the theories are wrong! The theory is that there was a monastery at Inverkirkaig and that the monks’ wives lived in Badnaban. Well, as I said, I don’t wholly see why this shouldn’t be the case and there has been many a more knowledgeable mind than mine brought to bear on this subject. I guess it must date from the time when the Celtic Church – which of course was Catholic but which rather came to grief under the auspices of the saintly Queen Margaret in the 11th century – allowed their priests and monks to be married and although I have never actually read anywhere that they weren’t supposed to live in the same place, maybe that was the case. Unfortunately though there doesn’t seem to be any real evidence of this – certainly I’ve never heard that there exist any remains of buildings which could have been the houses for the women, but they would probably now be long lost under the new buildings. There is no direct evidence, as far as I know, of there having been a monastery at Inverkirkaig either – the word “kirk” which forms part of the name being Norse and of course meaning church. The Gaelic word for church is “eaglais” and for a monastery is “manachainn” – as in A’ Mhanachainn which is the Gaelic name for Beauly near Inverness and which reflects the fact that Alexander II, King of Scots, possibly (or maybe not he) established a large monastery there. So I, in my normal way, remain a bit sceptical about the supposed origins of these two names – but as I say, far greater minds than mine have accepted these theories as being if not fact, at least most likely, so who am I to argue…?

Certainly, it would be rather strange given that the word for a church appears in the name Inverkirkaig that there wasn’t some sort of religious connection and if that be the case – and assuming the connection between the two townships – then it either must date to a time when the clergy were able to be openly married or that they kept a “harem” of women near by!! Either way, as there is still a reasonable amount of road between Badnaban and Inverkirkaig, and that that road has only existed for a relatively short period of time, the poor old monks must have had quite a trek every time they wanted to visit their families…! 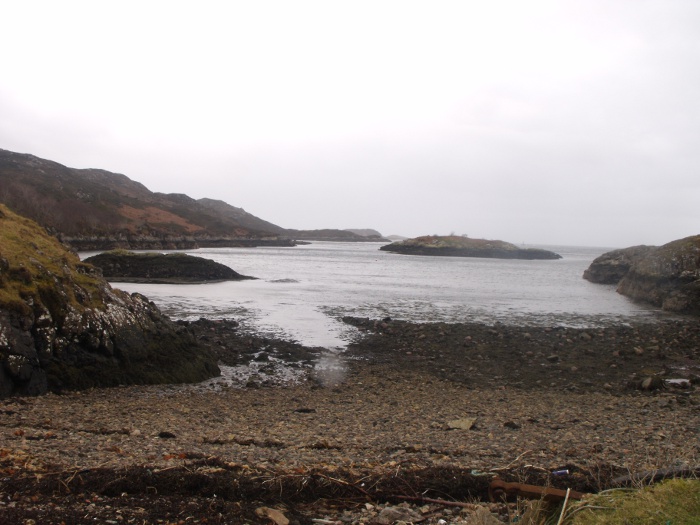 This entry was posted in Local area and tagged Badnaban. Bookmark the permalink.