A wee bit about our Geopark

A few years ago, my Old Man was secretary to a steering committee set up to promote this area with a view to it being accepted as part of the Global Geopark network. They worked away at it, raising both money and profile until eventually in 2005, they were successful and the 772 square miles (200,000 hectares) of coastal strip between Drumrunie, just north of Ullapool, and running north in a sort of wobbly-sided rectangle until you fall off the edge of Europe at Cape Wrath, was accepted as a Geopark. I well remember the Grand Opening when a big marquee was set up at Knockan Crag – which is actually owned and run by Scottish Natural Heritage (SNH) but falls within the Geopark – and we had a great, if somewhat midgie, party to celebrate the opening. The BBC was there and we had high hopes of some good publicity for our newly won endeavour. In this we were disappointed as all we got was a very short, rather patronising report squashed between the sports news and the weather forecast in which they failed to identify exactly where this had all happened – could have been anywhere in Scotland!!

At this point, the steering committee changed personnel. Chris stepped down as secretary as he had said from the start that he didn’t want to be involved in the day-to-day running of the Park once it had been set up, and the then chairman, Ron Evans, was preparing to leave the area. But we saw with interest that some very suitable and attractive signs had been set up welcoming visitors to the Park and also over time, attractive and informative panels arrived by the roadside – some of which I have looked at and some I have not… 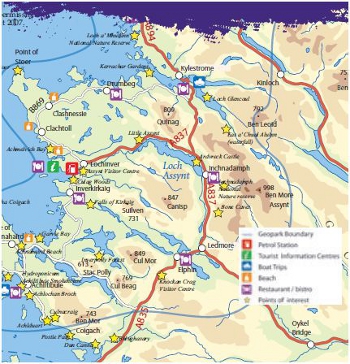 Then a year or two passed and things went seemingly rather quiet. I am sure that work was going on in the background all the time – and certainly the mountains didn’t pack their bags and leave in a huff because nothing seemed to be happening 🙂 – it’s just that we as a community didn’t hear much about it – until recently that is! As a member of the Field Club Committee, I knew that someone was going to come to speak to us at our March meeting about “Geotourism”, but a) I really didn’t have much idea what that was all about and b) I had no notion that in fact this talk was going to be primarily about our very own Geopark. I had almost decided not to go – but was very glad indeed that I did!

Donald Fisher – a Scourie-based geologist – came to give us this talk. He had been awarded some money from the Winston Churchill Memorial Trust travelling fellowship – an organisation set up to allow British citizens from all walks of life to travel abroad to bring knowledge and methods of best practice in their fields back to this country. Donald had been to America, Australia, New Zealand and Canada where he had been warmly welcomed by the staff that run Geoparks in those countries at places like the Grand Canyon in America; the fantastic Wave Rock formation and Uluru (once known as Ayres Rock) in Australia; and the amazing Glow Worm caves in New Zealand. On that trip he had not only learned an awful lot about the dos and don’ts of best practice in running a Geopark, but he had also come to realise that our area completely and utterly matches up to anything these other places have to offer, and some! The first part of this talk consisted of his experiences and pictures from his travels and stunning they were too. Everyone agreed that this had been a most entertaining and informative evening. 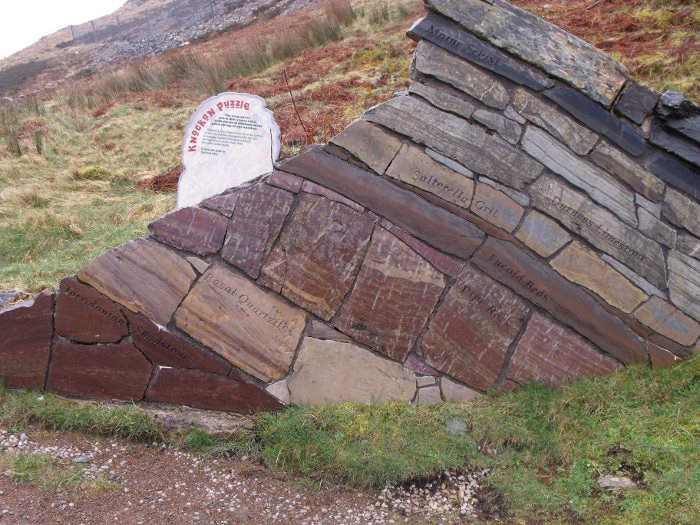 One thing of which we can boast and which is ours (and ours alone) is that we can honestly claim that this area is the cradle of modern geology. This is because that it was here, in this area, that the world-renowned geologists Ben Peach (1842-1926) and his pupil and associate John Horne (1848-1928) did their work on what is known as the “Moine Thrust” whereby layers of Torridan sandstone – which is a mere 1,000 million years old – is clearly seen to be undercutting the Lewisian Gneis which is 3,000 million years old (some of the oldest rock in the world), and as a result of this work the theory of Plate Tectonics and Continental Drift which nowadays we all rather take for granted was first formulated. This phenomenon is incredibly easy to see here, so much so that even I have no trouble making it out – I first saw it from Willie Watson’s boat, The Statesmen, as she chugged her way up Loch Glencoul. It is amazing to see – to realise that you are actually witnessing the movement of the Earth’s crust even though of course it is so very slow that you can’t actually see the movement, just its affects. 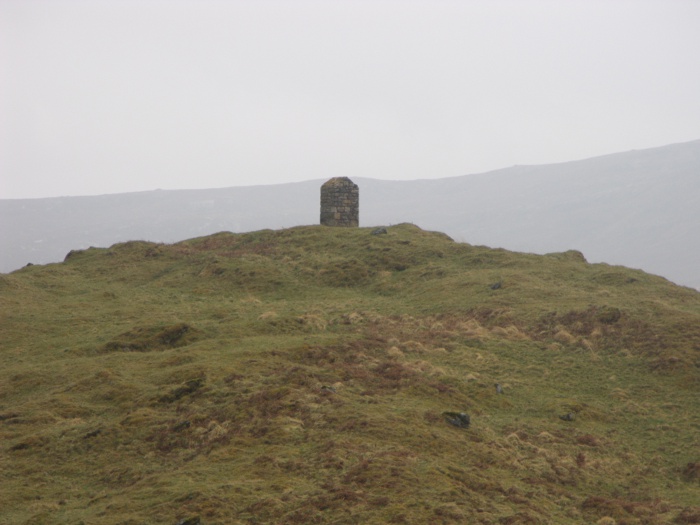 But what constitutes a Geopark? Well, it was at this meeting of the Field Club that I learned that there was more to it than just rock – although rock itself can be extraordinarily beautiful, and here I am thinking especially of pipe rock which is only 540 million years old and was made by worms tunnelling through sand, leaving streaks of pink running through the darker red of what is now sandstone. It is probably my favourite rock and I have a wee piece in my fish tank – but I digress… A Geopark is of course primarily about the landscape and the rocks that form it – the geodiversity – but it is also to do with the people connected with the land, their history and culture – and, naturally, hard economics. Although I suspect that it wasn’t easy for any of the Geoparks in the world to get the money needed to get up and running – it never is – it is proving a real struggle for the very hardworking volunteers – including and especially Donald Fisher, and also one of our Highland councillors who is very much involved, George Farlow – not only to raise money but also to get any political backing. This is unfortunate for all sorts of reasons of course, but mostly because, in spite of what the BBC might have thought, this is far from a joke! The economic benefits for a remote area such as this of the Geopark are potentially very large indeed. Donald explained in his talk that Geotourism is one of the real growth industries globally just now – and we really need to be part of it. Here we have, though, a bit of a chicken and egg situation – catch 22 if you like – because we need to raise funds so that we can employ a director to raise funds!! What’s new in that? Unfortunately, nothing in this day and age…

In my last post, I was having a bit of a downer on the climate here, but in fact it really isn’t so bad – today for instance is stunning albeit not especially warm, but it’s bright, sunny and the air smells divine! And as George pointed out, when we’ve had rain in autumn and the burns and cascades are running high, it is just marvellous! Being an oceanic climate, we have amazing flora – I was up the limestone scree in this picture a couple of years ago with Professor James Merriweather , a fern expert. He was positively dancing about with rapture at what he was finding up there, which really goes to show that our Geopark is not just for geologists or even geotourists, but also for all sorts of people with all sorts of interests. At the end of the day though, it is the geodiversity of the area that makes for such a varied biodiversity.

Last Thursday there was another meeting, this time in Elphin, all part of the Geopark road show which has been touring the area. This meeting had greater emphasis on plans for the future including ideas for a purpose-built visitors’ centre – but more about that next week.