Art in the sand 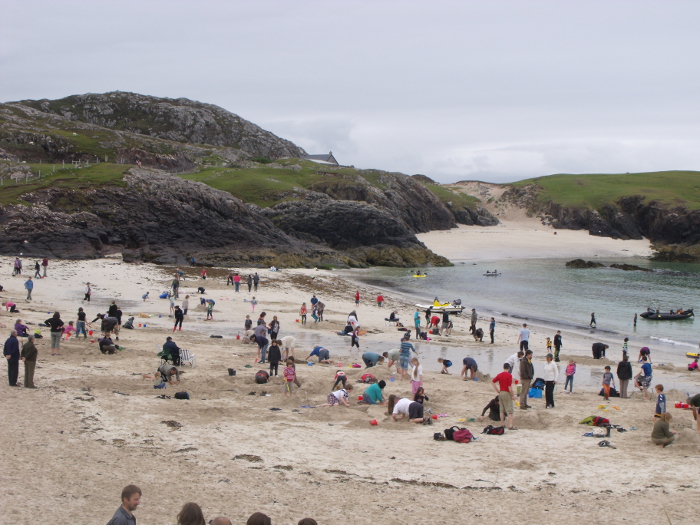 I am ashamed to admit that in the 10 years we have lived here, I had never been up to Clachtoll to see the sand sculpture competition! Although I have always known about it, I always managed to miss it. Of course, because of the need to have the tide right for the event, it is never on the same day year to year.

This year the tide came right last Thursday – the competition kicking off at midday. I was astonished to find out that this is the 16th year that the competition has been held. It is organised by our Ranger Service and receives a bit of financial support from Assynt Tourist Group – well, there are quite a few prizes needed! The competition is organised by age – which includes a section for grown-ups – but by far the largest number of entries was for the “family” section, which had 43 entries! Who says family life is dead? It certainly isn’t when it comes to building structures in the sand… Naturally, some of the tiniest entrants had a little help from their parents – but that’s all part of the fun. Clachtoll beach is then divided up appropriately. On entering, the contestants have to say what they plan to do, although they are free to change their minds so long as they let the organisers know. Well, sometimes it is sensible to see how the inspiration and the sand flows on the day! There were quite a few folk there just to watch, and the car park was full to overflowing. It was easier to come by boat, and quite a few people had done just that!

We had held our normal Gaelic session in the morning, which doesn’t finish until 12, and so I had thrown some lunch down me quickly before heading off up the road in time to get there without missing too much. On arriving, I found that I needn’t have bothered too much about feeding myself before leaving home, as the Munch Box was there serving their excellent fish and chips. Although the beach was pretty busy when I arrived, people were still turning up who wanted to join in, and so the judging was postponed by half an hour until 1.30. But it seemed to me that people were still busy building while the judging was happening – it was all refreshingly informal Needless to say, any dogs on the beach were kept strictly under control! Although it was somewhat overcast that afternoon, it was dry and thankfully there was no wind. I should think that it would be incredibly difficult to build in sand if the wind was blowing it off your structure and into your face!

In past years, I had seen pictures (rather grainy black and white ones in our Assynt News) of the winning entries and had always been very impressed with what I had seen, but the pictures could never really do justice to the sculptures, and it was quite amazing seeing them in real life. The different ideas that people come up with are quite extraordinary… I was somewhat concerned about a young lad buried in the sand as his cohorts built a “living mermaid” around him, he was already shivering and his teeth were chattering – but he survived and it was worth it as they won the 8-11 class! I didn’t wholly appreciate the representation of Jimmy Saville’s chair until hearing about its sale on the news the day after – not all the entries were about sea and sand, although one of my favourites was a depiction of the pyramids of Giza complete with Sphinx. I am posting most of the pictures I took this time and letting you see for yourselves… I tried to note down the winning entries in each class and will write which ones they are in the captions. Some were still works-in-progress when I took the pics, so for that I apologise – you will have to imagine the finished articles. The prize giving was fun, with everyone gathered round Andy. There were prizes for first, second and third in each class – all very suitable – and there was a definite “aaah” moment when a wee lass went up for the first prize in the 7 and under class, which was a stuffed otter. 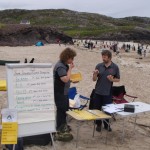 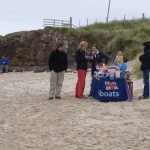 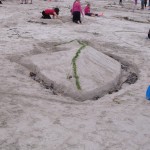 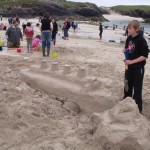 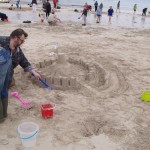 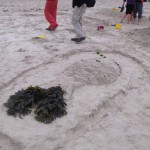 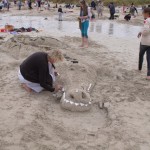 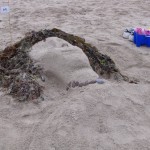 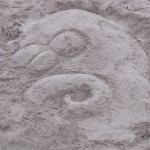 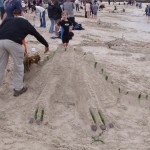 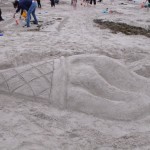 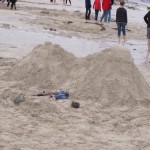 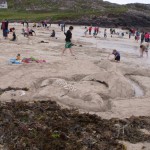 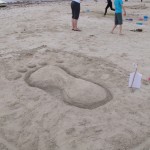 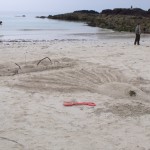 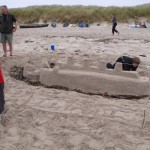 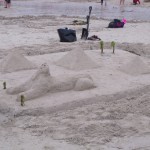 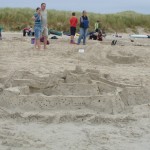 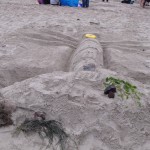 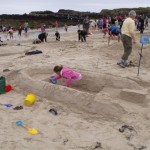 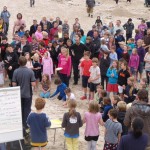 I won’t waffle on as much as normal this week, but let the pictures speak for themselves. Before I stop, though, I will say a few words about the Ranger Service. One of their main remits, apart of course from looking after and recording the wild beings of this area – which includes all aspects of wildlife, not just our four-legged friends but also those with eight, six or two legs or with no legs at all – is education, and especially of the young. This competition is mostly just for fun, but there is of course an element of education about it as the children are messing about with things natural as they gather seaweed and shells etc. for their sculptures, and there was a prize for wildlife interpretation.

Later on this month, there will be a walk entitled “Gruffalo’s Child” run by the Rangers and which will happen in Culag Woods. Andy Summers, head ranger for this area, was telling me how popular this ’ere Gruffalo is with young children and how good it is educationally when it comes to things to do with nature. The Ranger Service also runs walks for adults in the summer, to which all are welcome. In Lochinver they are based in our Visitors’ Centre – they have the whole of the upstairs and visitors are encouraged to go up and look at the displays and education boards up there which are both fun and informative. There they also list recent sightings of things like whales, otters, basking sharks and golden eagles. Downstairs, comfortable seats are set out in front of a screen where there is a live feed from whichever nest a webcam is situated within. In past years, a camera has been in a heron’s nest and an eagle’s eyrie, but this year it was in a buzzards nest, and the one time I happened to get the chance to have a look at it, the nest was full of great, big, fluffy white balls of sleeping buzzard chicks – all three chicks were doing well at that time and by now I should think they have flown the nest as it was a couple of months ago when I saw them. At that time, a family was happily ensconced on the sofas watching the screen – who really needs television when you have that… 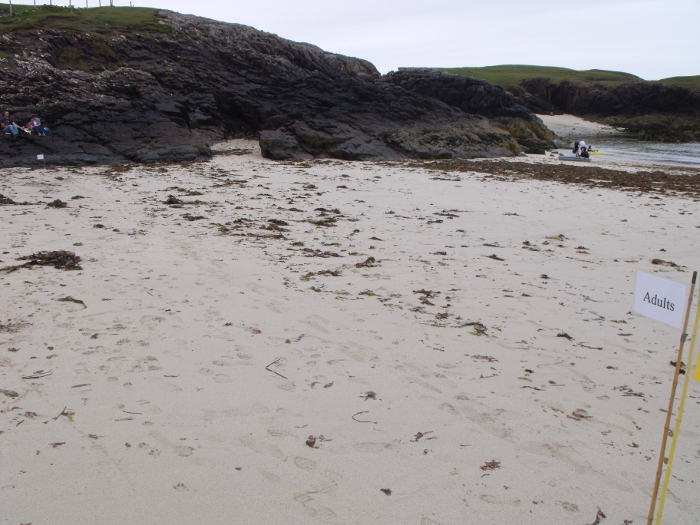