The Assynt Festival – next instalment

The Festival may now be over, but it is certainly going to take several posts to cover even the events to which I managed to go! We left it last week at Glencanisp Lodge at the end of what had been an excellent guided walk and quick trip to look at Bill Boggia’s yurt. There were walks of that ilk every day of the Festival, and of course time did not allow that I went on all of them, but I have heard good reports. On the Thursday evening there was something involving the school children entitled “An cluinn thu na smeòraichean?” or in English “Did you hear the thrushes?” Unfortunately, I have no idea what this was about or how it went but the fact that it was in Gaelic when none of the children have the language was ambitious but brilliant!!

It is a sore point with many people locally that there is no Gaelic in our schools – for quite a few years, the Lochinver school had a wee Gaelic choir under the tutelage of the old headmaster, Kenny MacKenzie – known affectionately locally as “Kenny Bong”, although I have never been able to find out why! For a number of years, the choir went to the National Mòd and usually won – much to the chagrin of other schools who have Gaelic departments, but whose choirs were always runners up to Lochinver! But now, time and tide have caught up on Kenny who needed to stop and the choir is no more. The feeling of the need for Gaelic is especially strong among the parents of the Stoer school, but always and always the difficulty is finding a teacher who has Gaelic and is willing either to live in this remote part of the world – a two hour drive from the nearest M&S! – or who is willing and also able to be a peripatetic teacher of Gaelic. The children do get some Gaelic when they move up to the Àrd Sgoil in Ullapool, but by then it is often too late for them… Until this problem can be redressed, it isn’t going to be awfully possible to bring the Gaelic language properly back into this part of the world where it most definitely belongs – but we do what we can. 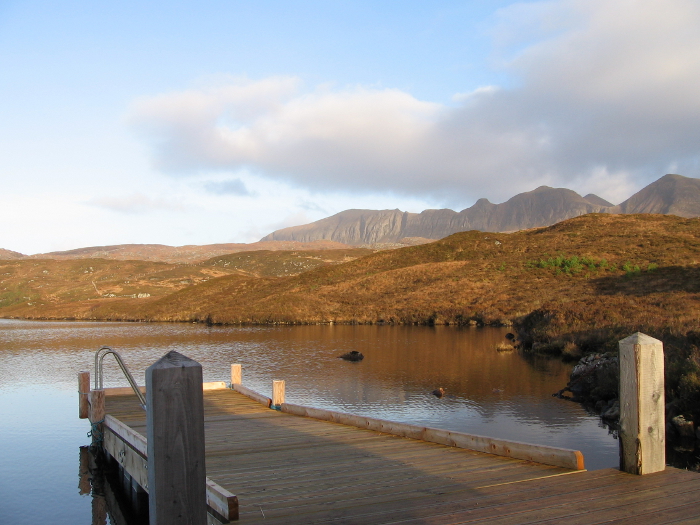 On Friday evening, there was a play in the Village Hall which I really wished I had made the effort to get to and that was “A Souvenir of Great Yarmouth”, a piece about the fisher lassies who used to follow the herring fleet around the coast – which was quite an industry in the 19th and 20th centuries. When the boats came in and discharged their cargoes of herring, the lassies would gut and pack them in great barrels of salt, mostly for export to the Continent and Russia. I know a bit about this history through learning the history of knitting – which sounds rather strange, but while the lassies waited for the boats – and being industrious creatures with no radios, TVs, hand-held computers or mobile phones to keep them occupied – what else would they do but knit. Of course, they took their local gansey patterns with them which they then taught to other knitters from other parts of the country – or probably more often than not, the other knitters would just copy a pattern they liked! Naturally, they also learned the patterns from other areas. Patterns were thus disseminated around the country – but it is also true to say that the various coastal areas around Britain remained remarkably loyal to their own pattern and styles of fisher ganseys.

According to Gwen, who said that she very much enjoyed the play and that it was very well received by the 40-50 people who were there, this bit of knitting history was given a good mention in the play and was of especial interest to a Shetland lady who has lived in Lochinver for many years and is well-known locally as being a fantastic knitter and someone who has won awards for her work – but who remains very modest about her achievements. Of course, this business of following the herring fleet went on well into the 20th century and there are people alive today who either followed the fleet themselves or who have relatives who did – this is very much recent history. 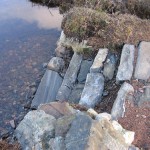 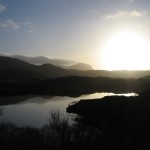 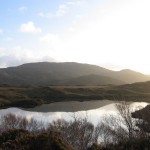 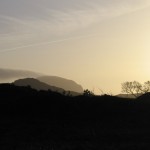 But as I said, I missed out on seeing the play – one reason being that I was out all Friday afternoon at the opening of the Tree Nursery in Little Assynt, which was held as part of the Festival. Again, this was a very well attended event held in and around the poly-tunnels which have been constructed in one of the two car parks serving the Little Assynt Estate, which is now owned by the Culag Community Woodland Trust. This project has been a while in the establishment – under the auspices of Coigach and Assynt Living Landscape (CALL) – and the idea is to grow native trees from seed gathered locally. In the past, young trees had been bought in from nurseries in Aberdeenshire or further south in Scotland, but conditions are such up here that they rarely survived – so the decision was taken to grow our own from seed gathered locally. We have the perfect man for the job in Nick Cluney, who stays at Rudha near Ullapool and who I know quite well as he is our excellent plumber! He told me at the opening that in fact Tree-person was his first career, but that as this job is only for four days a week, he will be free to do some plumbing as well – phew, what a relief to hear that!! He was telling me that there is an understandable fashion for planting the iconic Scots pine locally – but that it doesn’t actually belong to this area.

The great Caledonian forest, which at one time covered most of Scotland, never quite reached Assynt – our native trees being downy birch, alder, willow, rowans and other such small, more shrubby, trees better suited to our windy, oceanic climate. I love broadleaved trees and certainly have no problem at all with cutting down the plantations of spruce, which absolutely do NOT belong here, and replacing them with native trees – and of course, the trees once established will seed themselves around the place. What I for one would not like – which is something that some other folk seem to be keen on – is trying to cover this whole area in trees. There is much evidence that there was a lot more woodland here than there is now, but to replant or just plant too much wood would do away with so much else – especially the briophytes and other things which require a particular environment. It would also fundamentally change the nature of this rocky wilderness which I don’t think would be such a good idea… I would hate not to be able to see the landscape for the trees – something which I didn’t enjoy when on a visit to New England!

Anyway – enough ranting for one post!! The opening went very well – just a couple of heavy showers to send us scurrying for shelter. The Scourie school orchestra entertained us enthusiastically, and the wee choir had all decorated plain white t-shirts with tree motifs which were very splendid, all the more so for the fact that the tree designs were all either appliquéd or embroidered. After the formal opening and (short) speeches, there was not only tea, coffee and home-baking, but also wine for those not driving. Romney took a small group out on a walk up the path there – which I went on as I had never walked that path even though it must have been there five or six years! She was very interesting on the aims of the project and the reasons why such a thing is needed for biodiversity etc., and I stuck my oar in and gave an impromptu explanation of the Gaelic names of the mountains we could see from the path – all of which was well-received by the group.

At one point in the proceedings, I was chatting a way to a rather charming, middle-aged man, who introduced himself as Rob Gibson – our MSP. I was very happy to meet him and to find that he was there and giving his support to such an endeavour. Unfortunately, I had no camera to take pictures of the event itself, so will leave you with a few general views taken while out walking in the winter of 2006 on the Little Assynt All-abilities Path which is just a couple of miles down the road. They are “mood” pictures, and I hope you enjoy them… 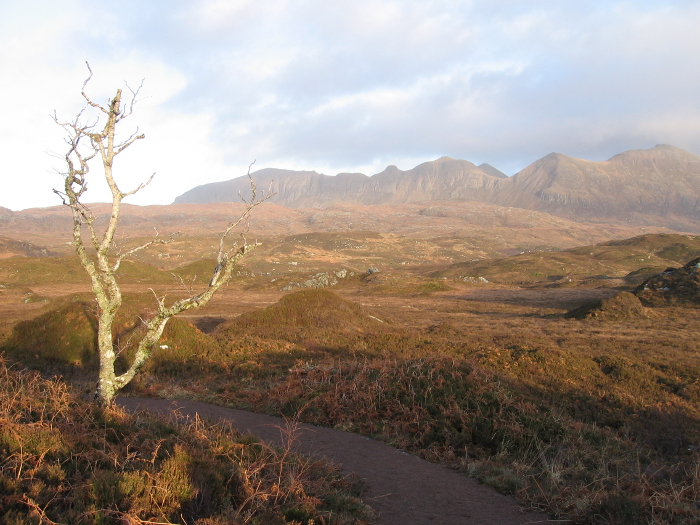 This entry was posted in Local area, Social events and tagged Assynt Festival. Bookmark the permalink.