Going off the beaten track

What a disappointment it has been recently, and I mean of course – the weather!! We have done better than many places in the UK in that we have had only a little snow and the days have been lovely and bright – but oh so cold! A couple of weeks ago, I hung my duffel coat in the wardrobe and thought that it wouldn’t see the light of day until the end of the year – but no! I have been wearing it again and although in many ways I love this sort of weather, I truly wish it would warm up! Snow of course is not uncommon in this country in March and sometimes into April, but it normally comes, looks pretty for a few hours and then goes again. I really feel for the potato farmers in the Channel Islands – I dare say this late period of frost and snow will not have done their crops any good at all and I am sure that Jersey Royals – which is a breed of potato that only grows in the Channel Islands and in a good year are the best first earlies you will ever taste – will be very expensive this year! However, we can do nothing about the weather – I’m happy to say 🙂 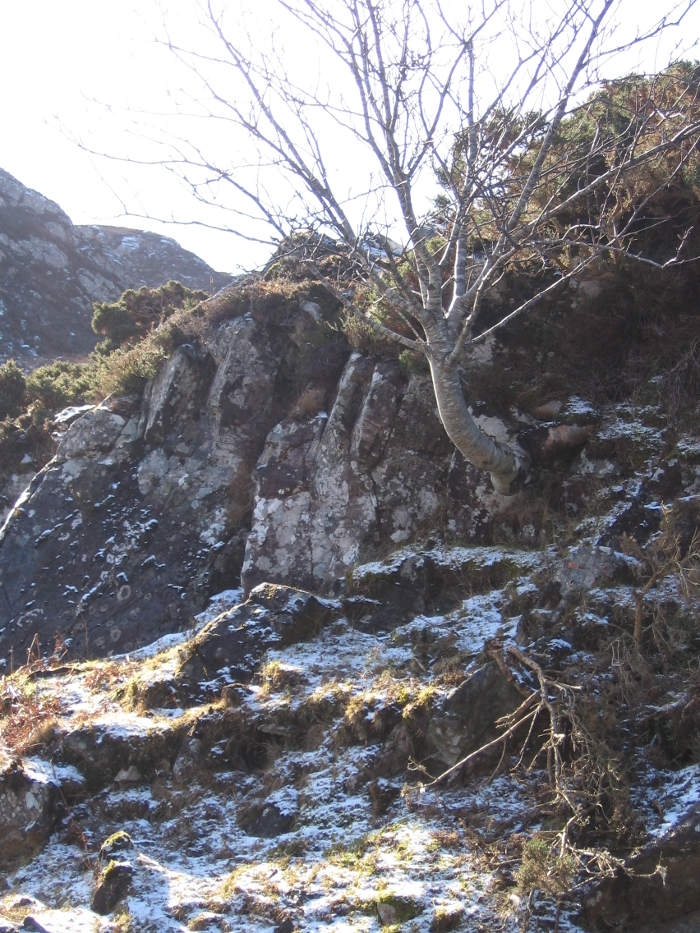 Gwen and I have been busy out after finding wildcat scats – this is the best time of year to do this as the animals are leaving “signals” about the place in the hopes of finding a mate. Sunday before last, we did a long day out going round Little Assynt Field, Inchnadamph and over to the forest track to Loch Urrigil. That day, as Sod’s Law would have it, was the only day in I don’t know how long when we had anything which approached rain – it was more what we call “Scotch Mist” and although we got a bit damp, it certainly wasn’t cold.

While going round Little Assynt Field, our first port of call, I fell to thinking about paths. We have very few made-up paths here – there is one through Culag Woods which used to be just forest bark, but has recently been upgraded to a more substantial path which folk who are not so steady on their feet can use. My friend, Susan, would not have been able to get down to the White Shore before the path was upgraded so although it is a bit of a scar through the woods, it isn’t so bad and serves a good purpose. One day, nature will probably take it back! There is a similar path at Little Assynt where you can take a push chair or a wheel chair – I know that because I have done it – and both those places are community owned under The Culag Woodland Trust. There is a new made-up path at Knocken Crag which I gather is also suitable for people who maybe need to use sticks, and there is the path up Stac Pollaidh – which is already being slowly taken back by nature. But those are about it and that is a good thing.

Having said all that, paths of course actually abound in this area – but they have grown “organically” as you might say. Sheep, cattle and deer start the paths, and human feet contribute to keeping them open – and of course they are also used by predatory animals. Why would they struggle through the undergrowth if there was a handy path available – they aren’t stupid 🙂 The path around Little Assynt Field – where the tree nursery has been set up – is one such path, but it was a bit of a struggle! Or maybe I should say that I was struggling a bit – Gwen and Storm didn’t have a lot of problems and left me behind several times. The path got very boggy in places, and there were streams and burns to cross, but the weather having been so dry, it was at least passable. Years ago, it was mooted that a path be created around this area along the edge of the wood from the road meeting the other path which goes between Little Assynt Field and Little Assynt. The idea was squashed on the grounds that we really have as many paths as we need here – and that’s quite right too in my opinion! 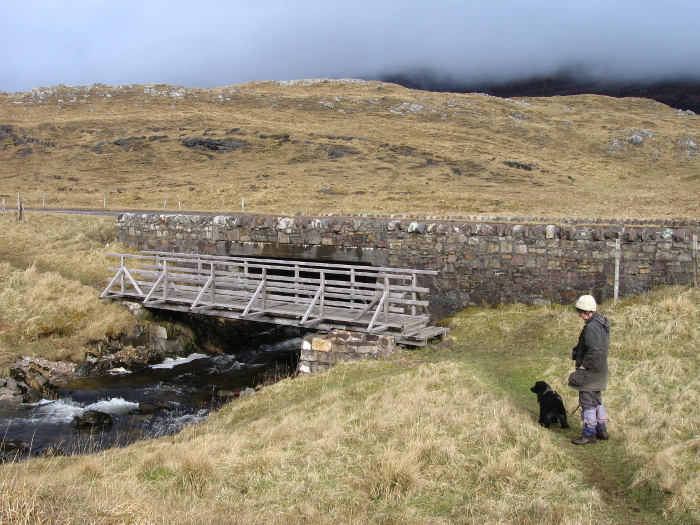 I have to say that I didn’t enjoy that bit terribly – although the going got a bit easier when we got up into the wood – but I did rather appreciate the challenge it afforded 🙂 The only sign of anything half-way predatory, though, was badger. So it was into the car and down the road to Inchnadamph. Here, Gwen had actually seen a wildcat trying to get through the fence – that was about 10 years ago, and around that time Helen Morrison, who lives there, also reported that her dog quite regularly chased a wildcat up a tree – or rather up the tree! So, we set off to scour the area, but found nothing to collect but a bone, which is now in the hands of an expert as no-one local could identify it!

The forest track to Loch Urrigil was a bit more promising, although what we collected there is more likely going to turn out to be dog rather than wildcat! By the time we had collected this sample, we were well ready to call it a day and head home..

Last Sunday, we decided on a shorter trip and set off up to Ardroe – which is in this locale. By now, it was definitely duffel coat weather – although absolutely glorious! I had got almost to Gwen’s house when I realised I had left my camera at home 🙁 I couldn’t believe it – here I was going somewhere I had never been before, and had nothing to take pictures with! I guess I will just have to make sure I go back there soon.

The only creatures we met at Ardroe were Claire’s pigs. She has a Wild Boar x Tamworth guilt and recently bought a Gloucester Old Spot male. They are sweet creatures who came to see what we might have in the way of goodies for them, and when they realised that nothing was forthcoming, they kept company with us for a while before going off on piggy business of their own. I was interested to note that Storm was not a bit phased by them nor them by her… Next time I go up that way, I must remember to put an apple or two in my pocket for them. 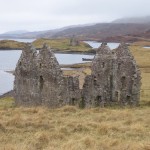 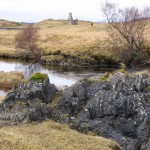 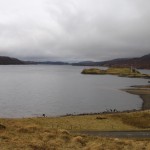 We walked around Ardroe Wood – which is a beautiful, peaceful place down by Loch Dubh – and then down to Camas na Frithearaich. That name has got me a bit foxed – “camas” means “bay”, but I can’t work out anything very sensible for Frithearaich – also spelt “Friaraich”. The nearest word I could find in my dictionaries was an adjective meaning peevish or impatient which would be a strange word to describe a bay – but not only that, the form “na Frithearaich” would imply a noun not an adjective. So “Bay of Peevishness”? Sounds a bit stupid!! Maybe if anyone reading this has a better thought on this subject, you could get in touch and put me out of my misery, please.

Whatever the meaning of the word, the place is beautiful – especially on this gorgeous day and we did find something “collectable” this time which was definitely icing on the cake…

This entry was posted in Landscape, Local area and tagged paths. Bookmark the permalink.

3 Responses to Going off the beaten track