Having posted about my ebook last week, I now have a bit of catching up to do!! On the Saturday before last, I went down to the village in time for a “soup and sweet” lunch in aid of the local Brownie pack. Gwen had persuaded me to go with her but I wasn’t terribly willing – too often lunches such as these are laden with gluten – in the soups, the sandwiches or bread and the deserts are often based on some sort of cake. I even took some Drywors sausage and a packet of nuts in my pocket just in case I got nothing to eat!!

This time, I need not have worried – and yet again I wished I had my camera with me! I had left it at home thinking I wouldn’t need it, but the Brownies had done a wonderful job decorating the hall for this event. They had made paper chains to hang around the place and the walls were festooned with their artwork – and they had even made the menus! The tables had been set together so that people could sit in sociable groups – Gwen, Belle and I joined the Summers family making a party of seven. The tables were covered in paper cloths and the cutlery came wrapped in paper napkins – all right and proper :-). It was “waitress service” – i.e. the Brownies themselves waited at the tables, and a very good job they did too. The soups were excellent – I had a delicious spiced parsnip which would have been hard to better anywhere. The sweets table was laden, with cakes, tarts and trifles but for us of a gluten-free persuasion, there was quite a selection of meringues – I had just a classic pud of two meringues sandwiched together with cream, but there were others with strawberries and mandarins. There was of course a raffle with some very good prizes, and a tombola. A lot of thought, planning and effort had gone into this lunchtime treat and I really hope it made oodles of lolly for the Brownies! 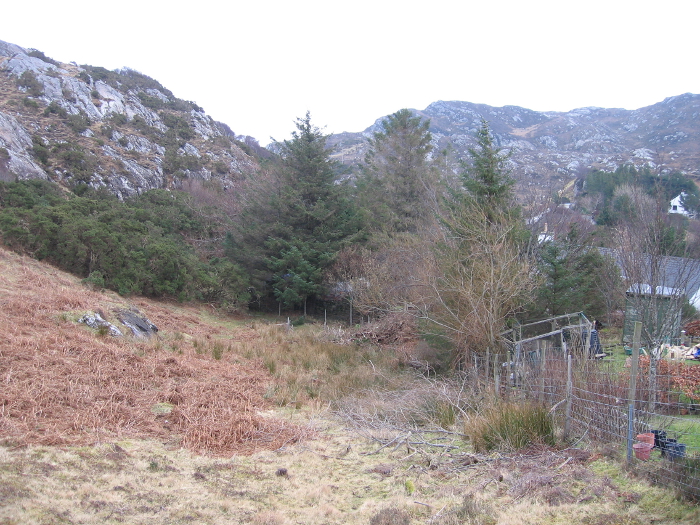 I have never been a Brownie – I was a Girl Guide for a wee while, but didn’t really enjoy it – which is something which I am sure had more to do with me as a person than anything else! I think if I had had the opportunity to be part of the Scouting movement in this part of the world, my experience would have been very different and I think any young person would get a lot out of it. The youngsters who looked after us so well on that day were not forced to do it – they were willing helpers!

After lunch, Gwen and I headed for the shore of Lochinver Bay to look for dead birds. This is an annual survey run by the Royal Society for the Protection of Birds (RSPB) and it has to take place on that particular weekend. It is a UK wide survey – over that weekend in late February, there will have been volunteers walking the coastline right around our island and, I imagine, all the various smaller islands surrounding our coast. This is a survey when you hope that you really don’t find anything!! We were looking for fresh – or at least recognisable – carcasses of sea birds or oiled birds. The foreshore of Lochinver harbour is not an easy one to cover, mostly because of the sea defences, which are huge rocks piled up along the edge of the beach. The beach itself is stony and very covered in seaweed, and it does take two to do this job. 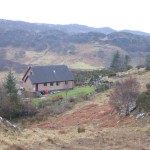 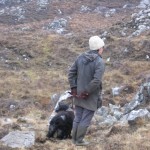 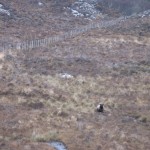 Gwen went along the rocks just under the fence beyond which the road runs, and I took the seaweed covered foreshore – both us us looking mostly along the high-tide line from different directions. Unfortunately, because we had enjoyed the lunch so much, we had left the hall a bit later than planned and the tide was coming in quite rapidly! It was however, a very gentle sea with no wind, so it only occasionally got in the way 🙂 It took about an hour and a half to walk the beach from the steps opposite Crumer to the Larder, going slowly and trying to be careful not to land on our posteriors!! I am happy to say that we found nothing on this occasion. Gwen did the survey with Lyn last year, and unfortunately, they did find something – a dead fulmer in full feather. Gwen reckoned that it was a young bird recently dead and possibly what had happened was that it had blown in on a gale of wind and banged into the stone wall under the children’s playground where it was found. A bit like a bird flying into a window and breaking its neck 🙁 I am glad we didn’t find anything of that ilk this time… However, I did come across Adam cooking mussels Ray Mears-style on a wee driftwood fire. He offered me one, and it was delicious – slightly smoked!

Of course, Gwen and I having done such a lot of “work” our reward had to be ice cream in Lochinver Larder – and very enjoyable it was too 🙂

The following Wednesday was the first of our searches for wildcat scats. We decided it would be worth just looking round here in Strathan because my neighbour, Don Campbell, reckons he has pictures of a wildcat taken by his night camera back in 2011 – he is still trying to find the pics lost somewhere in his archive of thousands! So Gwen, Storm and I duly set off up the hill opposite our house – which I think might be part of Cnoc a’ Mhadaidh Ruaidh – or Hill of the Fox – which name is attached to the bigger hill just a bit further up the Brae. This time though, we stuck to the fence line round the back of the Campbells’ and the MacAskills’ gardens, before striking up the hill. I have never been up there in the more than 10 years we have lived here, and have always thought that the sea lay just beyond the hill – but no! Had I looked at the map, I would have seen that the land goes on out to Ruadh nam Fiadhag – which translates, I think, as Headland of the Black Heathberry. However, there was no sign even of any carnivore at all existing in this part of Strathan – no fox scats or anything, except the remains of a couple of pigeons but that was almost certainly a neighbourhood cat’s doing!

Having found nothing there, we crossed back to our side of the road and went up the peat path which runs up beside our house. Gwen had never been up there – like many people, she didn’t know that this particular path exists. Up there, we did find fox droppings and what I at least thought might be pine martin, although Gwen disagreed and she is much better with such things than I! But there was no sign whatsoever of anything that could have been something left by a wildcat, and we came home disappointed.

Last Sunday, we did a longer search but I will talk a bit about that in my next post… 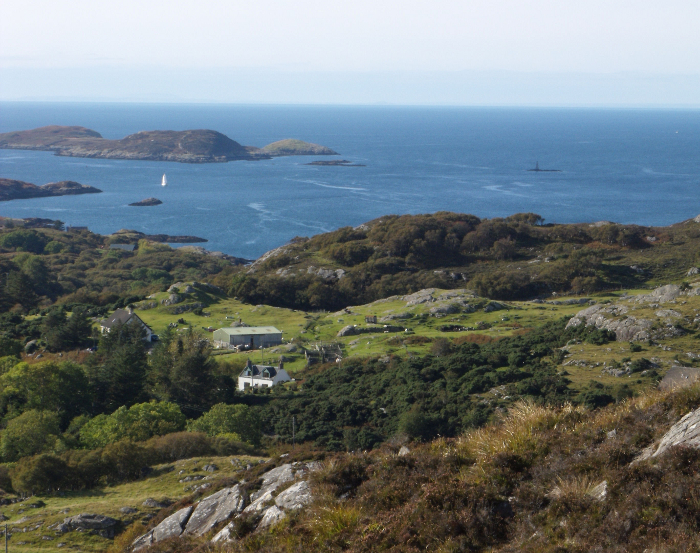 This entry was posted in Animals, Family and tagged animals, birds. Bookmark the permalink.