Christmas is a’ coming!

When I need to stravaig around the area here – either to Badnaban for piping lessons or down to the village – I normally go on foot. This is partly to save fuel and wear and tear on the tyres – thus helping the planet in a very small way as well as our pockets! – and also because, of course, it is jolly good exercise – especially when going “down” to the village, as one has to go “up” the Brae first and walking briskly up our Brae is one very good way of getting out of breath and thus building aerobic fitness! When we opened the curtains last Monday morning, it was to a reasonable covering of somewhat unhappy looking snow – unhappy because it was already raining quite hard and a slow thaw had set in. So I wrapped up well in my duffel coat, and umbrella in hand, made my way down to the Mission for my regular meeting with Claire to practice and study Gaelic together. 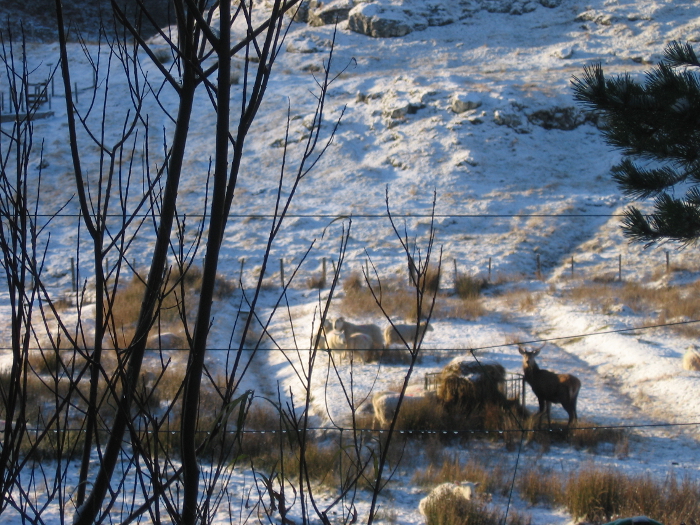 The worst obstacle to safe travel that day was our own drive – rain over ice had left it much as a skating rink and I don’t have “all weather” soles on my walking shoes, but after that the going was fine, which was in contrast to last Thursday when the going was pretty slippery all the way up and down the Brae! On both occasions, the loch looked lovely with its covering of skim ice on the shallow end with beautiful clear reflections – unfortunately, I was not carrying a camera on either occasion, and certainly on Monday morning it was not very pleasant for hanging around taking pictures – walking briskly was definitely order of the day. Not infrequently when I’m making my way down the road, people stop to offer me a lift – which sometimes I gratefully accept, but not if I’ve left enough time for my walk. Mostly it is people I know who offer me a lift but not always, sometimes they are just good Samaritans. It happens quite a lot in summer when I am running up and down the Brae for exercise, and folk think that I am in real need of help. Part of it is of course that in this part of the world it is safe not only to accept a lift, but also to pick up a hitch hiker or just someone who looks as though they need a ride. I have picked up hitch-hikers more than once in my travels, even when I have been on my own – much to Himself’s consternation! – but never have I had any problems…

However, on Saturday afternoon I did resort to the car to go down to the village for the Christmas Bazaar – and the main reason for that was that I intended to buy some of Dorele’s beautiful decorated glassware as Christmas presents for my sons and didn’t want to risk dropping anything on my way home. I was somewhat taken aback when I got down to the Village Hall shortly after the thing opened at 2.00 to find the place packed! There was no space in the car park and the road was lined with cars… I knew Father Christmas was to be arriving at 2.30, but this amount of traffic was a bit unprecedented for the Made in Assynt Christmas Fayre! However, it turned out that I had got it wrong – it wasn’t the Made in Assynt event but a Christmas-tide sale held in aid of the Macmillan nurses. 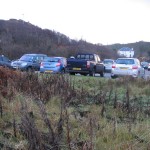 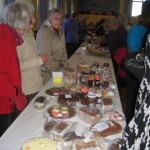 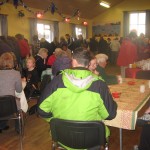 I managed to find a relatively sensible and legal place to park the car and went on into the Hall. I don’t think I have ever seen it quite so full – not even when Shoogelnifty came for a concert some years ago! The atmosphere was terrific – a real buzz in the air with everybody looking very relaxed, chatting to friends and acquaintances while browsing through the stalls, or partaking of tea and home-baking which was included in the £2.00 entrance fee. There were just a few stalls selling bric-a-brac and an amazingly eclectic selection of second-hand books, but the stall doing the best trade – apart from the raffle tickets where the two ladies selling them were rushed off their feet – was the home produce stall. While I was parking the car, I had seen a chap already leaving the hall with a sponge cake floating in his hands – he was looking very pleased to have got there in time to snaffle the cake he wanted:-) Good on him, I had thought to myself at the time! I had hoped for a bit of self-indulgence in the form of some tablet – but no, my luck was out as any that was there had been and long gone! There were still cakes and very prettily decorated cup cakes, tea breads and jars of gooseberry chutney and mincemeat left when I got to the stall, but it was already looking more than half empty!

One of the really nice things about events such as this is the chance to see people whose paths hadn’t crossed one’s own for a while, and one of the first people I bumped into – almost literally – was Jackie who had been in the art class I had done with Mary in the spring. She was sporting a red elf hat, and I twigged pretty quickly that that had a purpose! She and I made our way through the throng to the other end of the hall where some young children were happily dancing around the Christmas tree to the tune of jingle bells – and pretty soon there was a clanking of a bell, and Father Christmas (no-one could have recognised Simon from the Caberfeidh pub under an extensive white beard!) arrived with a sack full of surprises for the wee ones. 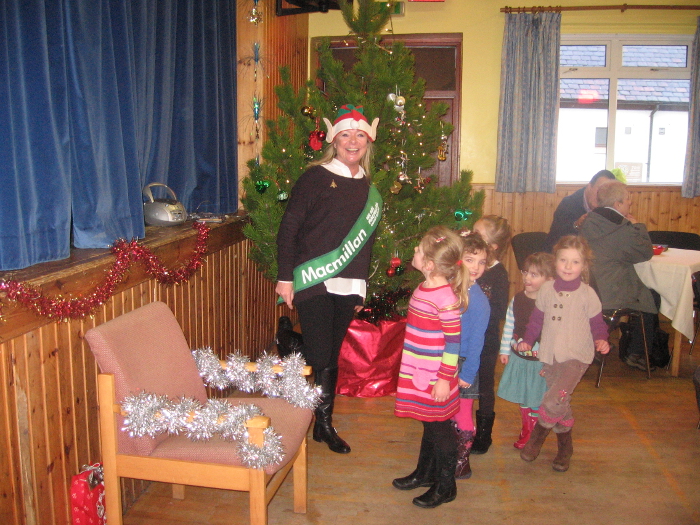 The local Macmillan committee is a very active one, and people do see it as a very good cause – which it is – sometimes because they or someone near to them have had need of the services of these hard-working and dedicated nurses. Yet again as I looked around the hall and at the familiar faces running the stalls, selling raffle tickets or serving tea and cakes, I felt pretty humbled. These people – mostly women in this instance – do a power of work and ask for nothing in return. For me that is charity in the real meaning of the word. I have heard that they made over £1,600 at that sale – not at all bad for a small place such as this:-)

Once Father Christmas had become well installed, I took my leave. The baking had looked very, very tempting, but there was nothing gluten-free and my thoughts were turning to getting home, popping some corn and settling down with Himself in front of the fire to watch the rugby match on the telly! The actual Made in Assynt Christmas bazaar will be held next Friday and Saturday – or so I was reliably informed – thus giving two opportunities for a bit of local Retail Therapy before the Festive Season really gets under way. Much better than struggling through the crowds in the impersonal atmosphere of an over-decorated shopping centre, with Christmas carols piped ad nauseam through the loud speaker system – in my humble opinion anyway… 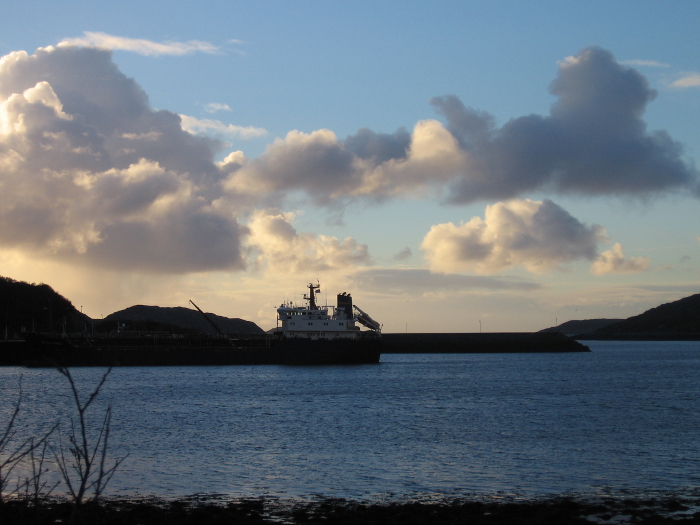 This entry was posted in Social events and tagged Christmas fayre. Bookmark the permalink.