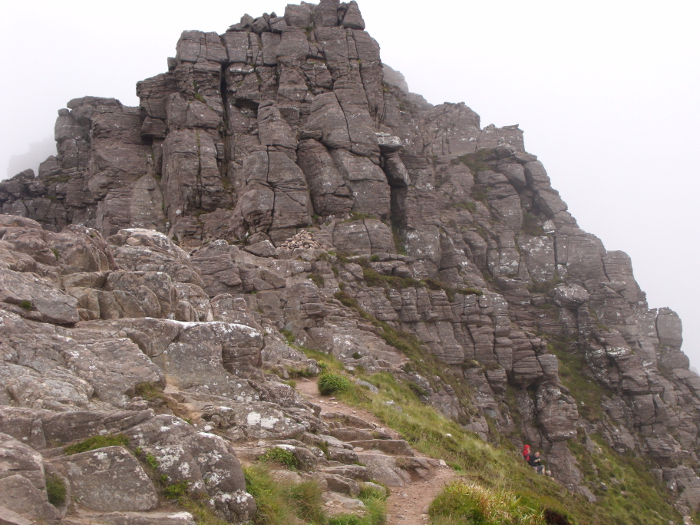 I have been deeply distressed to discover that Buddhist monks have been in Lochinver for about three days – and I knew nothing about it I went to see them last time they were here about five or six years ago when it was just an evening event. I remember being surprised then by the big turnout in the Village Hall in this really quite Christian community. I was especially distressed at missing the monks’ visit because we have a bit of family history surrounding Tibetan Buddhist monks, and also I do profess myself that I try to follow the Buddhist Path in life and would take any chance available of learning, especially the Tibetan form of Buddhism. However, because we don’t take the Assynt News where the weekend activities were advertised, I heard nothing about it until yesterday morning. I am hoping that I might be able to write something for this blog site and get some pictures with the aid of Clive Shepherd, who organised this visit. Keep watching this space… For myself, I can only hope that they will be back again before too long and next time, I will try to make sure I know about it!

In a way, this lost opportunity in my life has marred this week’s post – which I was otherwise really looking forward to writing – because last Wednesday I conquered my first mountain!! My artist friend, Mary King, had said that we should catch the first reasonable day when she wasn’t working, and she would take me up Stac Pollaidh – I had been really excited and not a little nervous about this plan!!

Stac Pollaidh is a long way off being our biggest mountain. At just over 2,000 feet, it is barely a Corbett, never mind a Munro. I cannot be certain, although I am sure there are some people who do know, exactly what Stac Pollaidh means in English. The word “poll” (pronounced powl) in Gaelic means a muddy, boggy hollow – which is not the sort of name you might normally give to a mountain!! On looking in Dwelly’s dictionary though, I found the adjective “pollach” meaning “lumpish”, and as Stac Pollaidh is quite “lumpish”, I thought maybe the origins of the name might be something of that ilk – but as I said, I can’t be sure. Mary had assured me that there was a made path pretty much to the top, and given that it isn’t that big, we both thought it would be a good starter mountain for me – especially as at the ripe old age of 61, I am a bit long in the tooth for starting with mountain climbing!! I have been at the top of some quite big mountains – Cairngorm; the White Mountain in New Hampshire and a quite substantial hill somewhere near Heidelberg – but this would be the first time I had gone up under my own steam – on Shank’s Pony so to speak rather than using a man-made device. However, I have complete trust in Mary – although still quite young, she has lived around here and walked these mountains for 25 years or so and knows them all intimately, so I felt sure she knew that I would be able to make the climb. 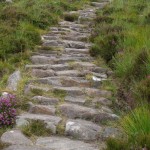 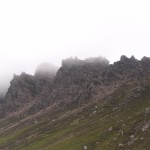 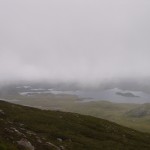 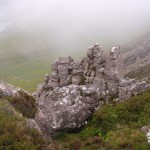 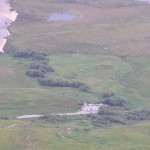 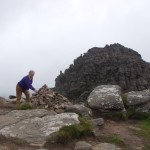 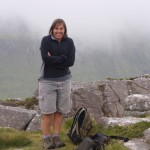 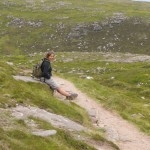 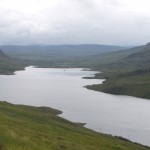 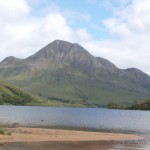 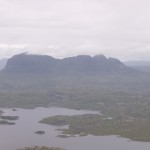 The forecast for Wednesday wasn’t bad, although there was cloud around. I picked Mary up at about 10 in the morning, and we drove down the “wee mad road”, watching the cloud and mist wreathed around the summit of Stac Pollaidh. We were a bit unsure as to whether we should go for it as neither of us wanted to expend quite a lot of energy if there was to be no view from the top, but it did look as though things would improve, so when we got to the car park we didn’t hesitate and after a quick fortifying cup of coffee, we set off. The bottom section of the path is quite like a steep stone staircase, and I began to wonder if this was such a good idea after all! At the stop of these steps, the path divides and there are two “kissing” gates – we selected the right-hand one and started the ascent proper. I have to say that I didn’t do too badly! Occasionally I found it necessary to stop for a wee breather – “to take a picture” – but on the whole I was able to keep up reasonably well with Mary and we made steady progress.

The path goes around the mountain and I found it a rather strange feeling to find that I seemed to have been going straight ahead but the scenery seemed to have turned around me! I especially noticed it on the way down, when the sea was ahead of me for about half the distance, and suddenly it appeared behind me! I had no feeling of walking around the mountain at all…

When we got to the top of the main part of the path and the choice was to go for the top or take the easier path around the saddle, I very nearly chickened out – but Mary would have none of that and after a few moments break, we continued on up to the highest part of the mountain to which you can get without actually climbing. It was quite steep, but not as bad as it looked and we arrived at the top of the path before I really knew it. By this time, the mistiness had cleared away and the views were all there for me to enjoy

There is no doubt that it is a special feeling being up on top of a mountain. I had no real idea of how marvellous it is – it’s not a feeling that I can easily describe. We spent sometime wandering around the saddle, and then sat down to a welcome cup of coffee and a “strubag” or snack – I had brought a hard boiled duck egg with me, and it has to be said that an egg had never tasted better! It was hard to tear myself away, but we had to go back down the mountain sometime.

For me, the journey down wasn’t very easy and Mary kept disappearing down the path ahead of me – in fact at one point, she was able to sit on a rock and eat an entire apple before I caught up with her! But that was more due to my own hesitation and care for my ageing knees – the path itself is fine. I found that Mary had taken us down the other path, which I think is the sensible way to traverse the mountain. The course we took up is steeper and easier for going up, while the path we took down is less steep and rocky and in my opinion at least, is easier for going down. The path was built in the 1990s and is made from the same sort of sandstone as the mountain itself. It has had time to weather and the grass has grown around it, so it almost looks as though nature and not man was responsible for it. We hadn’t met many people on our ascent – just one lady on her own, a couple of small parties of people and a family of four with two small children who were remarkable in that the children did the whole mountain up and down without a murmur! But as we got to the bottom, we were meeting more and more folk on their way up, so I was very glad that we had gone early.

When we got back to the car park, Mary suggested that we followed a rough path down on to a beach by the loch and this we did, spending a hour or so just relaxing in the sun…

This entry was posted in Landscape, Local area and tagged climbing, Stac Pollaidh. Bookmark the permalink.