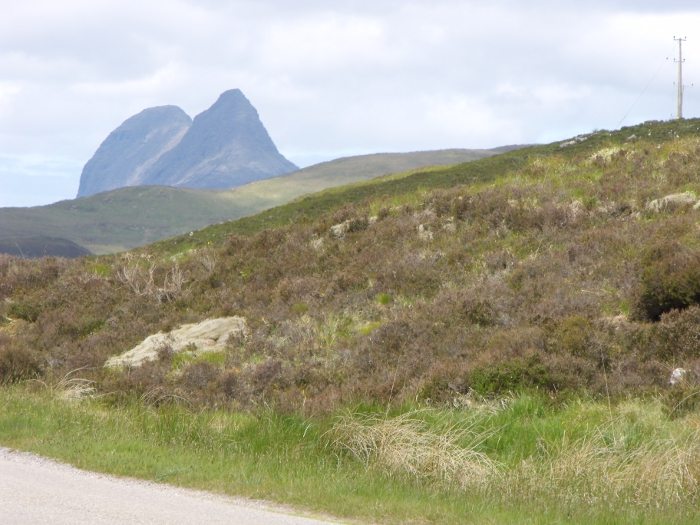 In the coming up to ten years since moving here, I have slowly but surely been learning the names of the various peaks and landmarks, lochs and lochans. Of course, it would take a lifetime to know them all – and I can tell you, there are folk around here that know pretty much all of them, complete with mental map reference!

Of course for anyone who knows Lochinver, it is that iconic mountain Suiliven that would immediately spring to mind. It certainly is a unique shape for this country, being as it is a “table mountain” when seen from certain angles – and especially from the sea. According to people who know much more about these things than I do, it was the Vikings that gave it the name (one of the few places in the landscape round here that isn’t Gaelic in origin), and it was basically a navigation mark for the longboats travelling passed to more lucrative pickings further south down the west coast. The Gaelic word for mountain, “beinn”, is feminine, but I have to say that I could never think of Suiliven as having anything feminine about him!

I can imagine that people very much enjoy walking up it – although I don’t think that many actually climb the vertical side, but I could be wrong about that. I certainly have never seen any ant-like figures glued to the side of the cliff face, and to my mind it would be a very dangerous thing to attempt!! I gather that it was first climbed in the 19th century by a father and son on their second attempt and wearing kilts – but again, that is only a story I have heard. It is highly unlikely that I will ever go up Suiliven from whichever side as it is a long walk in to the foot of the mountain before one even sets foot on it – and there are no roads or even tracks suitable for 4x4s. It is shank’s pony or nothing! 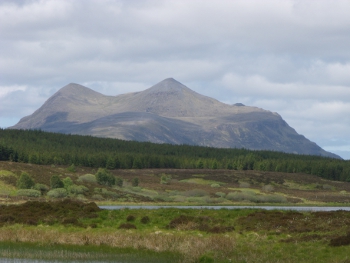 The peak I would consider going up and certainly hope to one day before I grow too old, or too much nearer to being harvested by the Grim Reaper, is Quiniag. This is my favourite little range of peaks in the whole world. The picture at the top of my blog is of Quiniag – a picture taken by our elder son, Robert, when he was with us over one Christmas holiday. He took the picture from the Little Assynt all-abilities path.

Quiniag is more truly the mountain that dominates this area rather than Suiliven, as it can be seen from all sorts of places and shows all sorts of different forms and shapes depending on from where you are viewing it. For instance, on the road up from Ullapool, you can clearly see a peak which has the shape (for me anyway) of a walrus snout! As you turn up the main road north over Sciag Pass, the mountain is suddenly closer and you can see the great, deep quarry with the main ridge – or beallach – running along above it. Going north up the coast road to Drumbeg, Sàil Garbh (pronounced garav) dominates – it is a fascinating mountain range, even though it never quite reaches 3,000 feet and is therefore merely a Corbett rather than a Munro. In fact, Suiliven also just falls short on the Munro stakes and is therefore missed out by Munro baggers – more fool them!

Quiniag is actually the English rendition of its Gaelic name Cuinneag, which means a bucket or pail, specifically a milking pail. People who know this often look at the quarry for the explanation of the name, but this is wrong. The true explanation can only really be seen properly from the top of the brae running up from Strathan where I live. When you hit the top of the brae going towards Lochinver, the mountain suddenly opens out in front of you – at least it does when the cloud cover isn’t too low! – and there just to the left is the peak shaped from this angle exactly like an upturned milking pail – and I should know! Having milked goats twice a day for 15 years, I am especially familiar with the shape of a milking pail . I think it is the back of this peak that looks like a walrus snout from the Ullapool road but I’m not completely sure about that, further proof of how enigmatic this mountain range is. 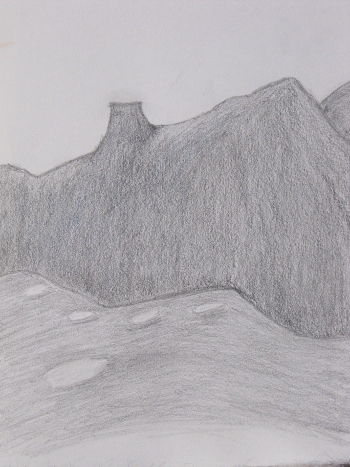 Here I refer you to the drawing I made of that particular peak. As homework for the recent series of art classes held in and around the village – now extended into the Sunday Sketching Club – we were given the task of drawing three views of Cuinneag, although I have to admit to only doing two in the end as I ran out of time! I am no great shakes as an artist, as you will note, but I do enjoy it and I have a feeling that Cuinneag is going to be the subject of my special study in the years to come. This picture is just the first of those studies. But whatever you might say about the quality of the drawing, the shape of the milking pail is very clear to see!

The mountain is normally very dark looking from the top of the brae – there is not much that grows on it (although a local man was telling me that in fact there is much more grass on it than there used to be as there are fewer sheep in the area.) On a clear day, it is dramatically outlined against the sky. When the clouds come down it can disappear completely, but again when there is a grey sky – as on the day I did this sketch – the mountain can stand out really black against a black sky, and then it is truly dramatic, bleak and almost menacing. I think I like it best though when there is snow on its top – then the sharp outline is softened and it looks beautiful, especially in moonlight as I frequently see it when coming home from a Dance Club meeting during the winter. 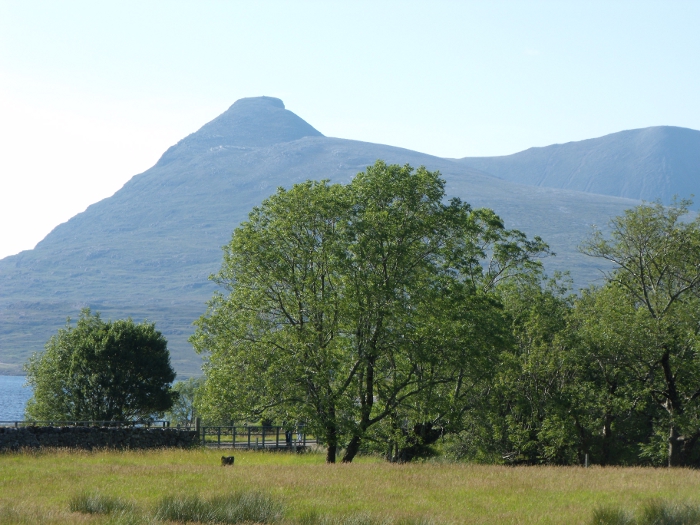 Of course, Cuinneag is just one of the mountains that stand out in this area. There’s Canisp which is a classic “witch’s hat” shaped mountain, Conival which stands in front of you as you drive south down Loch Assynt looking superb – especially when it has a veil of white cloud draped over it – and others. Going north there are more, including those famous peaks/race horses, Arkle and Foinavon, and going south there is the equally famous Stac Polly. Lots and lots of peaks standing individually in the landscape, unlike the mountain ranges further south where the peaks seem to run into each other – not that there is anything wrong with that, those ranges are superb in their own right. Here, though, we are spoilt for choice, but there is no doubt in my mind which is my favourite – Cuinneag.

This entry was posted in Landscape, Local area and tagged Cuinneag, mountains. Bookmark the permalink.