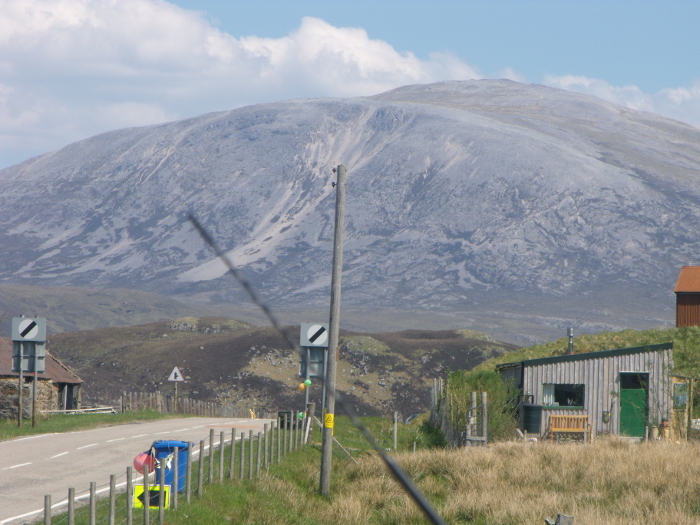 Last Saturday afternoon, Gwen and I took her dog, Storm, who is a rather charming and friendly Cocker Spaniel, to the Elphin Dog Show. We were still enjoying the heat wave which had been covering the country from head to toe, including us in the Highlands – for a change. Normally, if we have lovely weather, the rest of the UK doesn’t, but more usually that works in reverse!! But this time we too have had wall-to-wall sunshine and very high temperatures.

As per usual, we met at The Glac and drove down together to Elphin, which takes about half an hour. Elphin is actually just in Assynt, and it is a shame that very few people from around here actually support things which go on there – I bumped into only one other person who had come down from Lochinver to join the fun. The committee formed to bring the old school into community use and eventually renovate it is a very active one, full of good ideas to raise both money and the profile of what is now Elphin Community Centre. Parking isn’t so very easy and we were glad that we got there when we did as we got one of the last spaces available off the road. There was already quite a number of people and dogs there, mostly gathered round the table set up to take down names of entries into the various competitions. There was the usual mix of classes – ranging from “owners who look most like their pets” to fancy dress (I’m still not quite sure whether it was the people or the dogs who were dressed up – maybe both!), obedience to agility. There were some ladies there from a dog agility organisation based on the east coast who had kindly come out to show how it should be done, and also the new pet shop in Ullapool had a good store there selling doggy type stuff. The one thing they hadn’t got on their stall, however, was a pair of tick tweezers – unfortunately Gwen noticed a red tick in Storm’s eyebrow which resisted all attempts to remove it with fingers! Even a couple of children with much smaller fingers than ours had a go, but to no avail, and poor Storm had to enter the “prettiest eyes” class with a tick in full view!

By the time the show started in good earnest, quite a lot of people had arrived. The stand selling hot dogs outside and the table inside the old school room providing tea, coffee and, of course, home-baking were both doing a brisk trade, and the dogs weren’t forgotten – in the heat, water for them was essential and provided in big red bowls. People and dogs were sitting about in groups enjoying the sun except for those with longer-haired dogs, who rather kept to what little shade there was for the sake of their animals. After Gwen and Storm had been in the “prettiest eyes” and also the “best six legs” classes, we too, along with a cup of tea and a plate, joined those sitting in the shade and I just managed to save my wee piece of brownie from the big German Shepherd-x-Husky bitch who was also quite interested in it! She was my favourite dog on the ground – she was little more than a puppy and she didn’t take part in any of the competitions, the owners keeping her under tight control – I think they were in the process of training her. She seemed to be such a nice-natured animal – soft as butter! However, she wasn’t the biggest dog there – that honour went to a huge, black Great Dane… 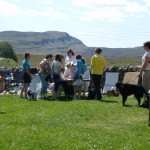 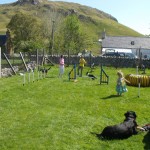 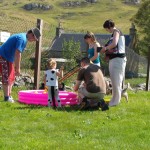 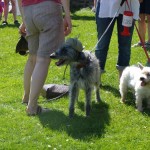 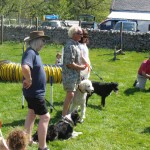 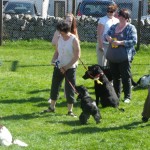 In fact, I was pleasantly surprised at the variety of dogs represented – round here, you get the impression that all the dogs are Border Collies, but in fact there was only one or two there for the show. Of course, a lot of the Border Collies who live in this area are working dogs, so wouldn’t be suitable for a show such as this – but people do have them as pets, so I was quite surprised that there weren’t more. The variety of dogs was really quite extensive – from the Dane right down to the smallest of Jack Russells, with all sorts of breeds, crosses and mongrels in between.

The classes went on at a brisk pace. Katie, who used to be our mobile vet but now has a practice in Tain, was in basic charge – along with others. There were rosettes for first, second and third places along with packets of dog treats. Storm came second in the “waggy-ist tail” class and also entered the OAP class which was open to all dogs over seven. Because of the heat, the competition was given priority, with the drawing of the raffle, announcements of the winners for the “name the stuffed dog” and of the “which variety of whisky was hidden under a rather ingenious wrapping carefully sewn to look like a dog” competition left until after the classes had finished and the “best in show” – which went to probably the smallest dog on the ground – had been awarded, because by then there were rather a lot of hot dogs about – not just on the barbecue 

A cooler respite could be had indoors as there was an interesting exhibition on the history of caving in north Scotland upstairs in what used to be the teacher’s house attached to the school. It was a well contrived exhibition of display boards with good pictures, which although was a lot about caving in other areas, did have a good section on our Bone Caves – which form part of a system of caves and pot-holes which is the longest in the country. This display was an interesting addition to the Dog Show.

The whole event was extremely good natured and sporting. Even the dogs were on their best behaviour – there were no sparring matches among the animals, although one dog did pinch his neighbour’s bit of sausage in the obedience class – obviously they were too hard to resist! I was actually very impressed with this class – most of the dogs involved did resist eating their bit of sausage until told they could! I wasn’t so terribly impressed with the “best tricks” class, and the agility class seemed to be only those women from the club – but generally the whole thing was great fun and although my shoulders did get a bit sun-burnt, I felt that was a small price to pay for such an enjoyable afternoon.

I overheard a conversation from which I gleaned that the next public event at the Elphin Hall is to be their Music Festival. Last year, the choir came along to sing for that, but I don’t know whether we have been invited for this year. In any event, the choir will be gathering in the old school room next weekend for a two day workshop when, with any luck, we will really get to grips with the Port-a-Beul for this year’s Mòd… 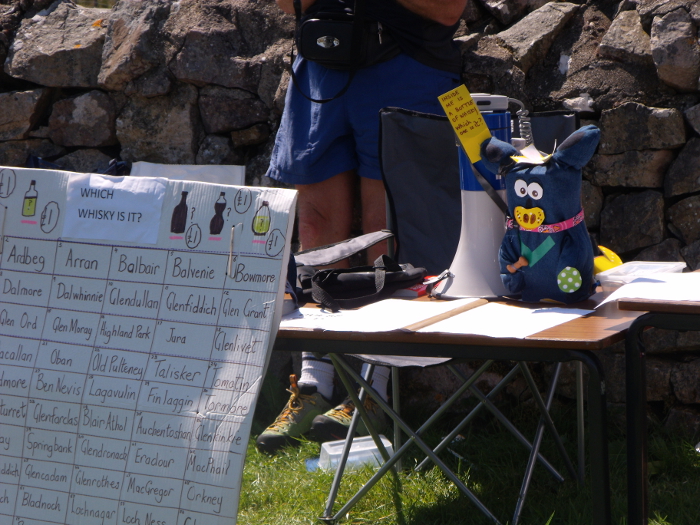 2 Responses to Dogs galore at Elphin