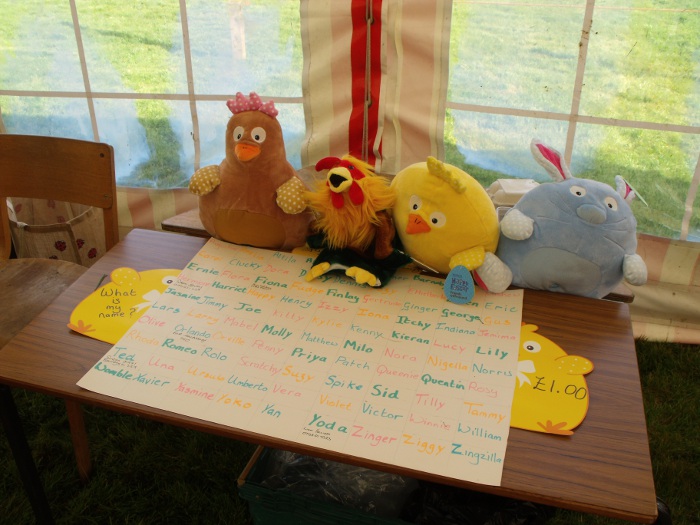 Last Saturday was the Annual Chicken Day in Elphin. This is its second year of being, and this year there were plenty of folks who came to enjoy an afternoon of complete silly fun – helped as always by the fact that the weather cleared up. I went down with my friends, Lynne and Morgana. None of us had been before and we didn’t know quite what to expect…

I hear you wondering what on this good earth a Chicken Day is. Well, in this instance, it is exactly as described – a day celebrating that useful but often much maligned bird – the chicken. There were many chicken and egg-related things going on, and all was to culminate in the Grand Chicken Race – which was quite different from the Bird Race we’ve blogged about in the past.

The event was held at the old school in Elphin, which the community is working hard to keep up as a facility for the township as there is no village hall in Elphin. A marquee was set up in what used to be the school master’s garden and that housed not only the chickens, but various stalls such as an egg hunt, a “name the chicken” game and local resident and chicken keeper, Sue Smith, cooking pancakes. In the spirit of participation, I guessed the name of the chicken – and won!! I was delighted when I suddenly had a big, fluffy, yellow chick shoved at me just before leaving, and was told that I had correctly guessed its name – Happy! He is now sitting on the spare bed and I shan’t part with him as he is such a “happy” souvenir of a lovely afternoon and he will come in very handy when we have young people come to stay.

Not all the chickens on display were entered into the Race – there were a few there just for show. It amazes me the interest nowadays in rare breeds of chicken. Years ago, I kept a few rare chickens, and then one had to drive for miles around the country to buy a few eggs to hatch. Nowadays they are bought on eBay and delivered by the postman! Which is a very good thing in my book – it would certainly be almost impossible to keep fancy breeds of chicken in a remote area such as this one without that facility. As it was, there were Polands with their fluffy head gear, Silkies with their fluffy leg wear, handsome Wyandottes – well quite a few different breeds along with a few standard hybrid layers. Most of the birds were in the care of enthusiastic youngsters – all planning their best strategy for getting their charges to win the Race! 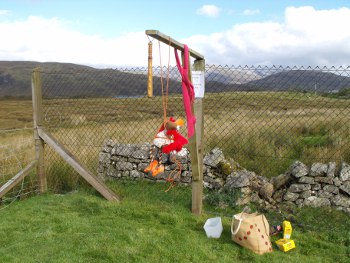 Outside, the course for the race took up one corner of the garden, with the course for the egg and spoon (naturally) races, a competition to see who could throw an egg the furthest without breaking it – made more difficult by cleverly placed rocks! – and a chicken hanging up whereby one had to try to bash it down while blindfolded. I hasten to add that this was a stuffed representation of a chicken! No animal or, for that matter, bird was harmed in any way during this day, and in fact the whole thing was overseen by our local vet, Katie, whose brain-child it was.

There were a couple of non-chicken/egg related events happening. One involved throwing golf balls at a whisky bottle – I think the golf balls were supposed to represent eggs, but as the idea was to hit the bottle, it could maybe have proven expensive if they had used real eggs! Games involving whisky are always popular round here – and maybe everywhere! – and they are guaranteed to raise quite a lot of money for whichever worthy cause the event is being held. Always a worthwhile thing to include in any fund-raising type event!

The other non-chicken event was a medieval-style firing of pots. Brenda and Sharon had a big fire going in another corner of the garden and were experimenting with various methods of firing pots – but this was so very interesting, I think it deserves a blog post of its own. Watch this space for more on that….

Cups of tea and coffee were on sale in the old school itself, with fantastic home-made cakes and scones, which were included in the £2.00 price for the beverage. I had a superb apple flan made to a German recipe, and as I had already had a pancake, I felt quite stuffed – but it was worth it. The walls of the school room were covered from top to bottom with pictures of chickens done by the local children – not only Assynt children but also children from the Ullapool junior school. Elphin actually falls in Assynt and therefore Sutherland, but it is very close to the border with Wester Ross, and Ullapool is nearer to them than their other nearest village, which is Lochinver. As far as I am aware, there aren’t any young children actually living in Elphin – which if true, seems a bit sad. However, the children had done the occasion proud and one could have spent hours just viewing all those pictures and admiring the imagination that went with them!

On the blackboard was the tote for the Race. My friend, Claire, who had entered her chicken, Bluebell, in the race was somewhat dismayed when her bird suddenly went from a 10/1 outsider to 2/1. She was going to lay a bet, but changed her mind at that point!! I don’t gamble, but I feel that the stakes on this occasion were not very high! The firm favourite went by the name of Coigeach Runner who was an offspring of last year’s winner.

The races kicked off with the egg and spoon events for various ages. I took part in the over 16s – complaining that there wasn’t an over 60s! – and actually came third in my heat. I took the “hare and tortoise” approach and went slowly and carefully, thus getting in ahead of two people who dropped their eggs but behind one who was disqualified for “holding on”. However I was pipped at the post in my semi-final – the strategy failed when Claire dropped her egg, but managed to pick it up and run on, still getting in ahead of me! After the classic egg and spoon races came one which was slightly different – a three legged egg and spoon race for parents and child. That was very amusing to watch! 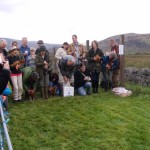 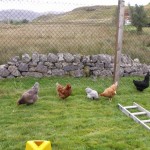 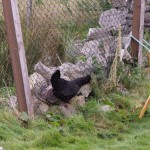 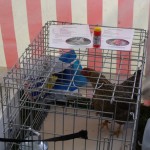 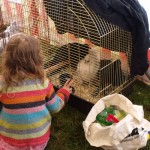 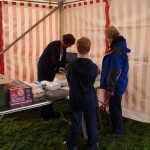 Then it was time for the Main Event. The starters lined up, the owners clutching their birds and their helpers at the other end of the course with tempting bags of food to encourage the chickens to go in the right direction. Unfortunately, this was disallowed – the chickens had to do the job unaided. So there they were – under starters orders with the excitement rising – then they were off. Well, a bit of an anti-climax really – most of the chickens just put their heads down and started pecking the grass! Slowly but surely though, they started making their way down the course – there was bags of time for photography. The bird who was well out in front was the favourite, Coigeach Runner, and she kept going to cross the line well in front of the others – but then nipped out through a hole in the fence!! A chap called Mark nipped round behind the fence in hot pursuit, but Coigeach Runner, living up to her name, evaded capture and disappeared among the clumps of rushes. Mark did manage to retrieve her eventually, which was just as well for she is obviously now a Very Valuable Bird 

After that, Lynne, Morgana and I decided that it was time to go home, and as we left, the rain came again.

I would say that a very good day was had by all at the Annual Elphin Chicken Day. 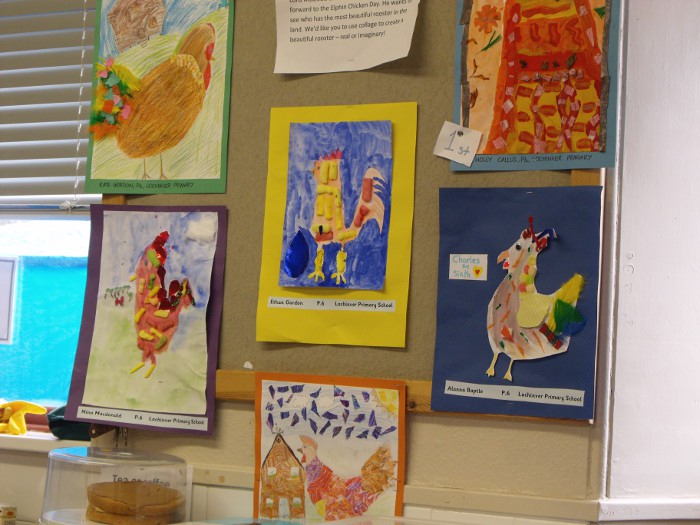 This entry was posted in Local area, Social events and tagged Chicken Day. Bookmark the permalink.