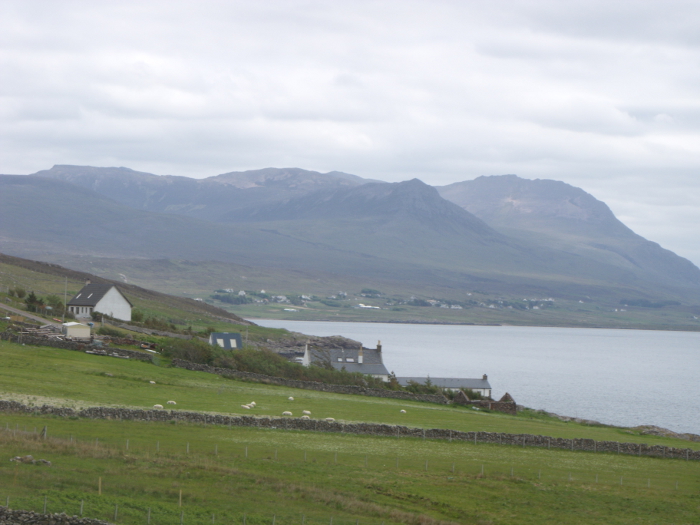 Last Sunday was the date for the June outing of the Assynt Field Club – this time we had planned a serious recording of plants in a specific square just down a track from the small township of Polbain near Achiltibuie. Achiltibuie is probably about equidistant from both Lochinver and Ullapool, and so when we met up in the big car park by Polbain Beach, there were folk there from both Field Clubs – including our resident fungus expert, Bruce Ing, who welcomed us to the area on behalf of Lochbroom Field Club – of which he is chairman – as when all is said and done, we were on their turf!

Ian Evans – who had been our chairman for years until very recently and who knows the names, Latin or common, of pretty much everything that lives under the sun or under the earth – was in charge of us as he would be the one who would be doing the bulk of the identifying of the plants. Gwen was recorder, I was official “bag lady” as I carried the specimens which needed further analysis and Gwen had a good friend visiting her who is also a naturalist, and who was terrific at spotting all sorts of things as well as also being a wiz with the Latin names of plants. What a team we made 🙂

The day was perfect for the task in hand – overcast and not too hot, but dry and with enough breeze most of the time to keep the midgies at bay. We drove further along the road to Dornie, and parked in the driveway of some very pleasant people who joined us on our plant hunt – thus bringing our numbers up to 15 which is not at all a bad turnout for this sort of excursion. A few hundred yards along a grassy track and we reached the wee burn that was the start of the “tetrad”. The plant experts were at once busy, heads down in the burn, while I took photos and others just generally milled around looking for plants and admiring the view. Looking at the arrangement of plants down in the tiny gulley, especially the combination of king cup and angelica, I couldn’t help thinking how lovely nature can be when left to Herself – these perfect arrangements of the plants were totally wild. I could only envy, and maybe also hope that I could emulate something of that look in my own garden! I have the king cup – I just need some angelica… That wee burn yielded a rich harvest for the plants men and women, and Gwen was busy with pencil and paper jotting down the findings and also taking and noting down GPS readings – we are after all in the 21st century! 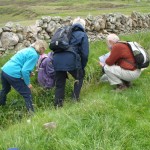 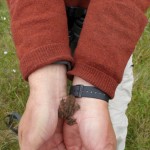 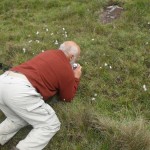 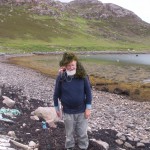 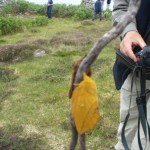 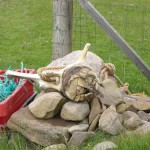 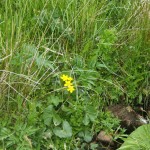 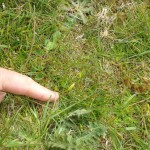 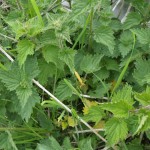 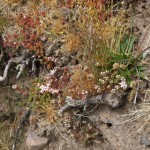 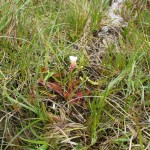 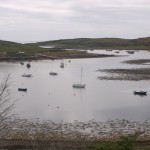 Moving further along beyond the fence, there was no track and we scrambled along rough ground, eyes down not only to find plants, but also to watch our step! Along the foreshore, there lay the rather sad remains of a dead sperm whale which had been washed up there sometime in Jan or Feb – I remember hearing about it at the time, but had no chance to go and see it. There were just a few vertebrae left on the beach – the other bones having been put to good use elsewhere 🙂 but from what was left, I felt that the whale was not as big as the Fin whale washed up at Raffin a few years ago (see photo in earlier blog). It is a bit sad that the only times we see such creatures are when they are dead – but just the fact that they are there rather goes to show that others are probably out there in our coastal waters, busy minding their own business and getting on with life! Down near the beach, the ground got fairly boggy, and I couldn’t help thinking that we probably couldn’t have made it along that stretch of ground if the weather hadn’t been as dry as it has! In spite of no rain now for a couple of weeks, the ground was still quite mushy…

We found a suitable spot for lunch just opposite Tanera Mòr, the biggest of the Summer Isles and the only one which is inhabited. They have a Post Office within a café there which has the right to print its own stamps. On our one visit there when we went out from Ullapool on the Summer Queen, I was able to buy a set for my father-in-law who was an avid stamp collector – it was the last present we gave him before his passing in 2003. One day I would love to do that trip again… But back to the present, and lunch in this lovely spot where it got quite warm and it was tempting just to stay put! I did wish I had brought a sketch pad along with me – I will do that next time. Lynn and I and several of the others, sat on and watched while the more energetic of the group invaded the seashore looking for whatever they could find. Then it was up on our feet once again and back to the cars to go down to the beach at Old Dornie which yielded a goodly crop of the sort of tiny plants that grow in salt and brackish water. Old Dornie is a superbly sheltered natural harbour and there were a number of boats moored there, with the bigger creel boats moored in another, probably deeper, section of the bay. The fact that it is so sheltered gives the perfect growing conditions for Wig Wrack – known locally as crofters’ wig – which has no anchoring roots and would be washed away in rougher waters. It is a pretty rare seaweed – but Ian spotted a good specimen, with which he demonstrated the reason for its name!

By this time, people were getting pretty tired, so some went off home while we visited just one more site to see if we could find the rare Bog Orchid – but we knew that it was a bit early for such, and indeed we didn’t find it. Lynn and I didn’t join this search but sat on a convenient rock and just enjoyed some peace and quiet for a while.

We didn’t just note the plants – of which we found 150 specimens – but also the larger forms of life such as Greylag Geese – most of whom fly north for the summer, but some stay here to breed – wheatears which abounded along with other small birds, and more than one frog, the second of which was a very striking yellow and brown job but unfortunately I wasn’t quick enough with my camera! Lynn, our moth expert, found several types of moth including two Drinker Moths who were obviously enjoying a bit of post-coital repose on a twig. Having Bruce along with us gave another dimension to the plant finds and he identified some interesting moulds growing on some of the plants.

All in all, it was a very enjoyable and interesting outing…

I was listening to Rèidio nan Ghàidheal on Monday morning as the Olympic Torch went through various carefully chosen places on the Isle of Lewis. Stornoway is the nearest the torch has come to us – a 3hr boat trip across the Minch! I have to say that there seems to be extremely little interest in the Olympic Games around here – although I am sure there will be some individuals who will be glued to their tv sets, most will be getting on with the things of summer as they do every year. I guess that has probably always been the way of things in this remote area – things that go on “down south” don’t really pertain to us, even in this day and age of instant communication. We did feel rather sorry for the weather over the Queen’s Jubilee weekend – especially as we had it dry albeit not that warm, and that is almost certainly one reason why this week has been a very busy one here! When we have a prolonged dry spell is when we run the risk of heather fires – we saw the burnt remains of fires last Sunday and there has been a big fire on Tanera Mòr – scary! So our prayer now is – “please let it rain – but only over night…” 🙂

This entry was posted in Field Club, Plants and tagged plant specimens, Polbain. Bookmark the permalink.