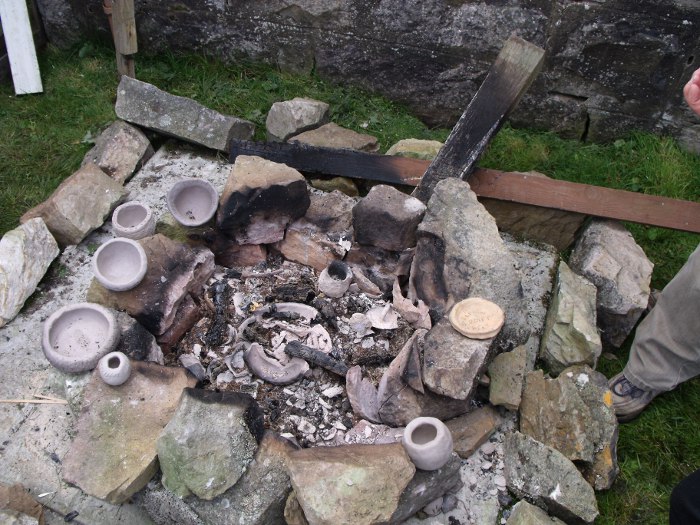 A couple of weeks ago as part of the post about the Elphin Chicken Day, I mentioned about the “Medieval” pot firing that was going on. Well, mistake no. 1 – it was Neolithic pot making – not Medieval pot making! My bad…

The firing of the pots was the culmination of a series of events connected with archaeological digs which have been going on locally over the summer – in this instance the connection being the Neolithic broch at Clachtoll. A quick word “in parentheses” here – a broch is a round tower built of stone but almost certainly with a turf roof. There are many examples in the north of Scotland and I believe, Ireland, dating from Neolithic times and there are several theories as to why they were built. The one I prefer is that they were the house of the “lord of the manor” (or other such important person) and had a similar function as castles in later times – i.e. both dwelling and defence. Other theories hold that they were purely for defence, but I think it would have been a lot of building just for somewhere to rush into when trouble came!

Whatever their true purpose – and that will probably never be known – the brochs in Scotland range from being in quite good condition like the one on Orkney; through being half way to being a ruin, as the one down the road from Tongue to Altnaharra; and ours in Clachtoll which really is little more than a heap of stones. I haven’t been out to it as yet – in the 10 years we have been here, I just have never made the opportunity – maybe I should next summer, it would make a good subject for a sketch! 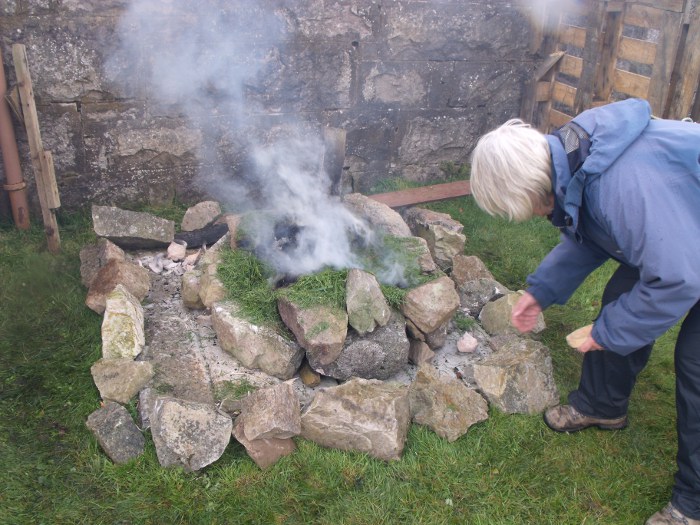 During the summer just gone, there was a “Neolithic pot making day” which I missed as it fell while I was away learning Gaelic, and I obviously missed a good day. Quite a few people turned out to make pots – seven from Stoer and 15 from Elphin, which included some folk from outwith the area who were taking part in the digs. This day was held under the supervision and guidance of Brenda Gibson who is a potter, and her partner Sharon. Brenda was telling me quickly about the events of that day at a meeting we both attended last week. Evidently, they used two different sorts of clay – one was taken straight out of the ground in Elphin and just left to drain for a wee while, and the other was a modern “crank” clay which has “grog” added – grog being clay which is fired and ground and then added to the clay before using. This was brought in for the project.

The results on the potting day were interesting in themselves. The modern clay of course made into nicely formed bowl shapes – no problem. The “Elphin” clay wouldn’t hold and could only be used for making flat dishes reminiscent of the ash-trays we all used to make at school! Brenda reckons that the “Elphin” clay needs something added to allow it to hold its shape when made into a pot, and obviously more experimentation is needed. It has to be said of course that early Man would have had to experiment to find what worked best for them – so it is not inappropriate to make experiments of our own!

After they were made, the pots were left to dry until the day came for them to be fired.

The first fire was lit at 10.30 am on the Chicken Day – I wasn’t there then. I caught up with them as the results of that firing were being investigated. Interestingly, most of the pots made from the modern clay had exploded to some degree or another, whereas the couple of bits made from the Elphin clay hadn’t! One of the wee plates made from the local clay was left in the fire at the request of the maker, but the other was removed. That one sat around long enough to have its photograph taken, but then fell to pieces in someone’s hand!! 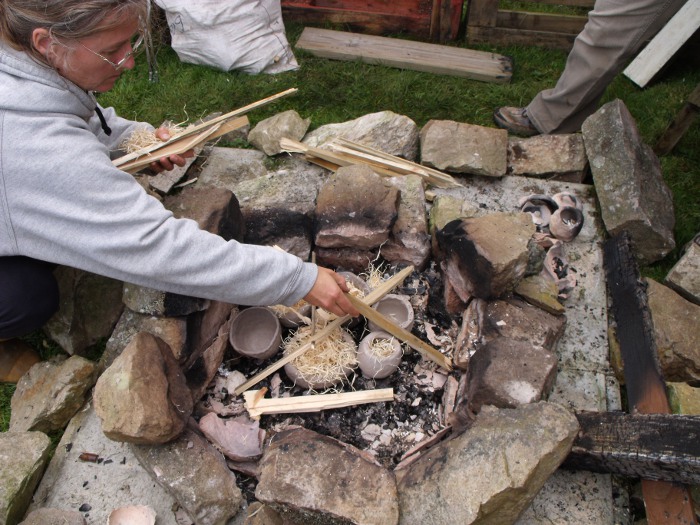 A second fire was built and this time I was there to see what happened. Mandy Haggith who was also involved in this suggested that they put wood shavings actually inside the next batch of pots. The fire was then built around the pots, using wood of course – they did use a match to light it rather than trying to do a Ray Mears and light the fire by rubbing two sticks together  After the fire was going well, they built a wall to surround it and then put turf on top. This would be, I think, very much what Neolithic peoples would have done to create enough heat to fire the pots – it makes good sense and the heat from the fire was terrific. As the day was relatively warm but with few midges, the crowd around the fire were there mostly because they were interested in what was going on – if the day had been either cold or midgey, the crowd around the fire could well have been a lot bigger! 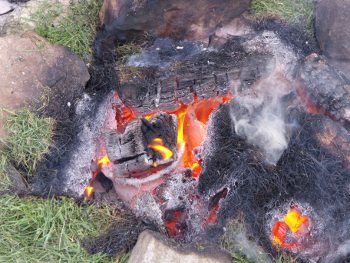 The results of this firing are not yet fully in – or at least weren’t when Brenda and I were talking. I know that some of the pots hadn’t survived in a state of wholeness – for one thing, we could hear wee explosions going on in the fire – but I don’t know yet whether the one made from Elphin clay which was left in came out intact after its prolonged firing, or whether some of the pots made from modern clay survived this time. When I have more information, I will include it in a later post.

My hope is though that this will be the first of several more experiments into how pots were made in Neolithic times – I find it all very interesting. I also hope that the next time there is a pot-making day, I will be able to go!

This whole event was part of a bigger project which Historical Assynt have been organising looking at all aspects of life in the past connected to some of the older and ruined buildings which are being investigated archaeologically now. Another of these buildings is the so-called “long-house” at Glen Leireag – which is near Nedd further north up the coast road from here. Again, that is a place I have not made time to visit and really should – especially as I will be involved in the next event which will be connected to this investigation.

As this house was known to be lived in for quite a long period before it was “cleared” in 1872, we will be holding a day of demonstrations of things which might have been part of life at the time just prior to the clearance. My part of this will be demonstrating spinning and also helping anyone who wants to have a go themselves, as we want this event to be an all round experience for people – especially children. I shall take my great wheel – or muckle wheel to give it its Scots name. I’m not sure how much they were used up here at the time, but it is a wheel that is both easy and fun to use. There will also be wool carding, weaving, felt making – not entirely appropriate but does give the essence of “fulling” cloth – or “waulking” as it is known locally. Knitting as well will be included – in fact this is going to be a thoroughly tactile, textile experience for all who come – but there has been a suggestion that a future event could be held on the subject of the food of the time! During the afternoon (this will be the 12th November), there will be a show of the “findings” from the various digs – thus bringing the whole thing together.

Keep reading this blog for further posts on this. 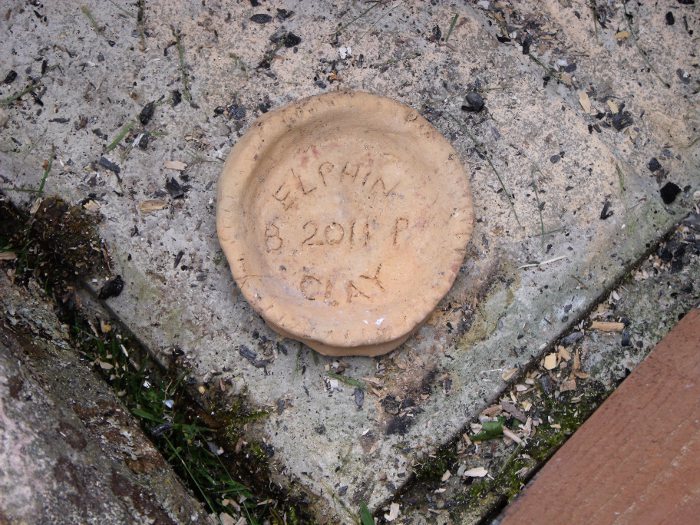