Fishing in and around Lochinver 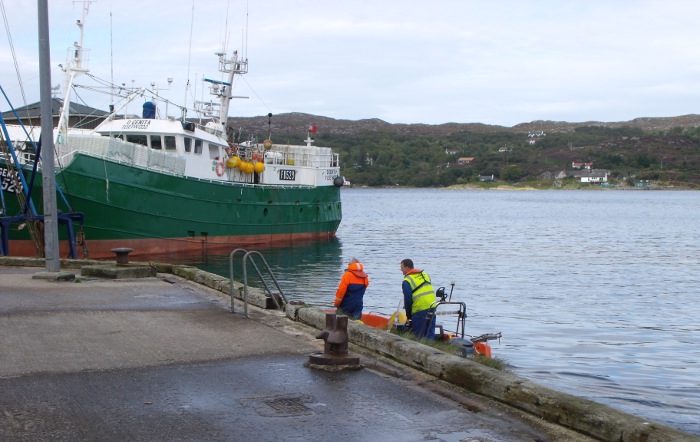 Here I am sitting in the house on the sort of day that no fisherman in his right mind would take to the sea – it is blowing a good old-fashioned October gale out there! – so in a perverse sort of way, I thought I would write a word or two about the fishing industry in Lochinver.

Fishing has always been important to this area – in fact Lochinver itself was built originally for the fishing industry. Before it was built in the 19th century, only the wee crofting townships such as the one I live in, Strathan, were in existence, tucked in and around this hilly, rocky landscape, but I am sure that the bay itself was always in use one way or another.

Lochinver Bay is naturally extremely sheltered. It has a fairly narrow entrance with the lump that is the small island of Soay slap in the middle – I have it on good authority that today the waves are breaking over the top of the island which must be 115 ft if it’s an inch! The bay has a deep channel which runs conveniently straight down the middle of it, and the addition of the mole -which is about 160 yards long stretching out into the bay – completes the whole nature of a deep, sheltered harbour – ideal for all sorts of boats from deep sea trawlers to pleasure yachts, from creel boats to kayaks. 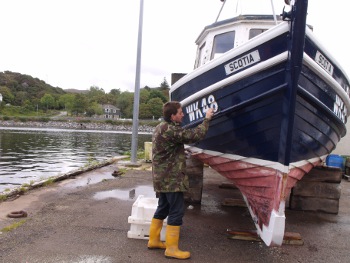 Old-timers from the local population will tell you of the time when the boats were moored in ranks alongside each other right across the bay, and to get ashore you had to walk across them. While I was on the Gaelic course at Ravenspoint on Lewis, the husband of the couple with whom I was staying had spent his working life as a fisherman and had many memories of these times in Lochinver. As he is in his late 60s or early 70s, you can get an idea of the sort of time I am talking about here, but I imagine this had been the case pretty much since the fishing industry took off here. Of course there are far fewer boats nowadays, but they probably land more fish out of one of the big trawlers than was ever landed in the days when there were so many boats you couldn’t see the water for them!

In fact, Lochinver – small village though it is with a population of 600 according to wikipedia, although I would be surprised if it is in fact as much as that – is second only to Peterhead in Scotland for the amount of fish landed!

As soon as the fish comes off the boats, it is graded in the big fish sheds down on the wharf, placed back on ice in fish boxes, loaded on to big lorries and driven down to France and Spain to provide “fresh” fish for the people there. Of course, it can’t really be all that fresh by then – it must take at least three days if not four to get down to those parts of the world and who knows when the fish were actually caught! However, that is how the world works nowadays….

Unfortunately for us, none of the fish stays in the area, but that is not to say that the fishing is not very important to the economy of this part of the world. For one thing, we owe our good road to Inverness to the fishing industry. Before that was built in the 1960s, it took three or four hours to get to Inverness on a single-track road – today it takes only 1 ½ or two. The milk and newspapers used to arrive in the middle of the afternoon and a shopping trip to the big city was a major undertaking. Now, we get regular deliveries to the shops, the morning papers arrive in the morning and mail order vans bringing those extras that city dwellers take for granted ply the road on a daily basis. This huge rise in the standard of life locally which helps keep the area alive and kicking is due entirely to the fishing industry. But our fish vendors have to go to Buckie or Mallaig to buy fish to sell to us…!!

The other reason why the industry is so vital to this place is the fact that the boats use our shops. They phone ahead as they are coming into port and order large amounts of meat and vegetables from the butcher – they also refuel from the big tanks, which in turn are replenished from the small oil tanker that plies up and down the coast keeping ports on the islands as well as the mainland supplied with fuel for the boats. As soon as the crews of the trawlers are released from their duties, they head down the road to the shops in the village to buy those extra items which the companies they work for don’t supply – things like six-packs of whatever drink and big bags of crisps and biscuits. We see them wandering back to the boats carrying several bags stuffed with goodies. They also use the post office. The fishermen come from all parts of the world spending months away from their families and, in my experience anyway, are friendly and polite. 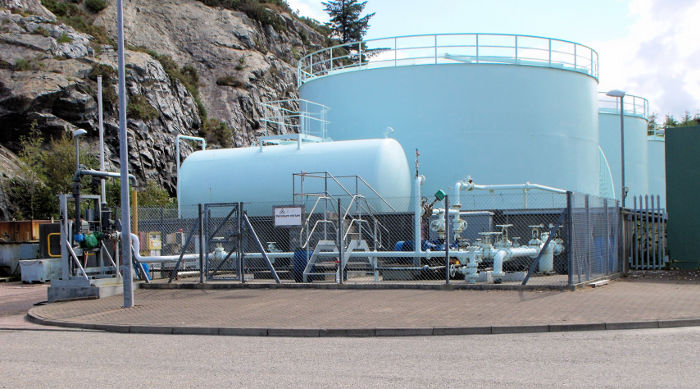 The big fuel tanks in the village are important for the creel boats – without this facility provided essentially for the big commercial boats, I imagine that it would be very difficult for the creel fisherman to get fuel for their boats in this remote part of the world. There are 6 or 8 of these small boats working out of Lochinver, owned and crewed by local fishermen. They catch lobsters and the langoustines for which our area has become quite famous – when we moved here 10 years ago, they were normally called prawns on the menus of the local restaurants, but nowadays they seem universally to be referred to in the French manner The creel boat crews also tend ropes of mussels and the scallop beds, and today creel fishing is reckoned to be probably the most sustainable and environmentally friendly form of fishing. The boats themselves are very smart and well-maintained, and we would certainly miss them if they were no longer here. 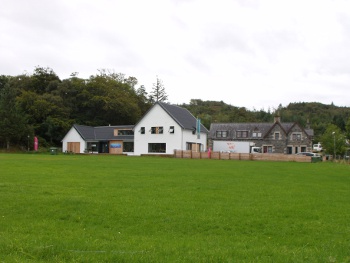 Just the fact that there is a fishing industry here meant that there was also a Deep Sea Fishermen’s Mission. This provided for the fisherman of course, but it was also a very useful facility for locals! There was a good café which has always been popular, and also facilities like washing machines and showers for those people around here that are not on mains electricity. However, because there doesn’t appear to be the need for such an establishment to serve deep sea fisherman anymore and with money being tight nowadays, the charity that runs the Deep Sea Fishermen’s Missions took the decision to close the one in Lochinver (also the one in Kinlochbervie which closed before ours, was sold privately and is now standing empty!) In Lochinver, the community swung into action – or at least certain members of it – and the mission now belongs to us. Again, this is a bit of a bigger subject, and I think deserves a post of its own.

So there you have it – Lochinver fishery in a nutshell. However, I know there is much more to say about it, and there will be more to come on the subject. In the meantime, I thought I would leave you with one or two more Gaelic words to do with fish – and to extend our vocabulary on marine life from my previous posting!

The word “bradan” (pronounced with a soft “t” sound in the middle rather than a “d”) means “salmon” and will be familiar to anyone who has had “bradan rosta” in a Loch Fyne restaurant – that just means “roasted salmon”!

Sgadan (again with a soft “t” sound – so is pronounced “skatan”) is a herring – a fish very important to the history of fisheries anywhere in this country.

Lèabag (pronounced “laypak”) is a flounder – or actually pretty much would do for any flat fish. However, there is lèabag mhòr (or big flounder) for plaice, lèabag leathann (or broad flounder) for halibut; lèabag chèarr (wrong or awkward flounder) for sole – and of course there are regional variations on a theme.

If anyone out there knows the Gaelic for Pollock I would be grateful for a heads up – that was a very important part of the local diet as it used to be easy to catch from the rocks and is still fished for in that way, but I haven’t been able to find the Gaelic word for it as yet.

Just before I close for this week, I thought I would mention that the rut has started bang on time! I had occasion to go outside last Friday evening, and was greeted with a loud bellowing from below us in the strath. I feel sorry for the stags that they have to expend so much energy and therefore so much of the fat that they carefully put on during the summer, leaving them depleted for the winter months, all for the sake of pro-creation. However, that is almost certainly what nature intended for them! In modern Gaelic, the month of October is called “An Damhair” – the month of the stag – and the start of the rut at the beginning of the month is a sure sign that winter is on the way. 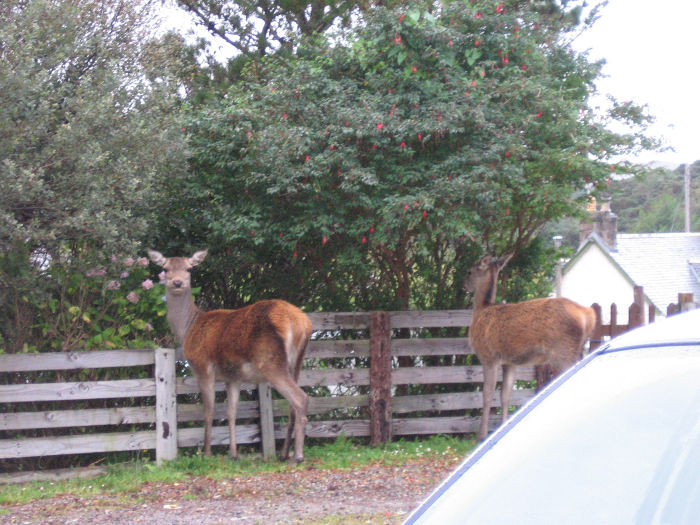 This entry was posted in Local area and tagged fishing, Lochinver Bay, the rut. Bookmark the permalink.