Gaelic course on the Isle of Lewis

As I said in my last blog post, I drove back from Skye on the Friday of our Highland Games. I had just long enough at home to say “hello” to the Old Man, re-pack my bag, just dumping all the washing from the previous week into the hamper, and head back down the road to Ullapool to catch the early ferry to Stornaway on Saturday morning – this time, I was going in my friend, Susan’s, car and Chris took me down and kept our car to himself for this week.

As I said before, there are courses in Gaelic going on all over Scotland just now – probably more than there have ever been, as interest in the language has grown immensely in recent years. However, this course held in South Lochs (or Sgìre na Pàirc to give it its correct Gaelic name) is somewhat different. The course itself is centred round a fairly recent facility which has been created at Ravenspoint (Ruadh an fhithich – pronounced roo-ugh an eek) in Kershader, which is one of the crofting townships which abound on the north coast of Sgìre na Pàirc. This building has provided a tremendous facility for the area, especially as it has a small but well-stocked shop – the local folk are otherwise entirely reliant upon mobile shops or trips to Stornoway, which is about 45 minutes drive, as there are no other local shops in the area. Ravenspoint has a hostel, café, a wee museum, computer facilities, fitness suite, play group – you name it! It also houses the Angus Macleod archive – Angus Macleod being a very influential man in the recent history of the area – and is home to The Island Book Trust. 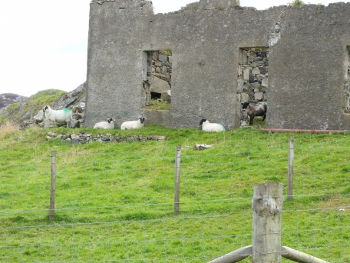 In case you are wondering, Sgìre na Pàirc (which translates roughly as “Land of the Park”) is so called because at one time – certainly going back to the Lordship of the Isles and probably further back than that – it was an area of land set aside for the hunting of deer. The land is almost an island with just a short isthmus joining it to the main part of Lewis, and there are the remains of a wall still to be clearly seen stretching across it – built almost certainly not only to keep the deer in, but also to keep people out! The area itself has played an important part in more recent crofting history – it was the overcrowding in the townships of Pàirc that lead to the setting up of the Congestion Board which looked into the problems faced by crofters in the Highlands generally and led to the setting up of the Crofting Commission. The people of Pàirc also played their part in the Land Raids which again highlighted the plight of people in the Highlands, and there was a famous incident known as the “Strì nam Feidh” which is now commemorated by a cairn which Angus Macleod was instrumental in getting erected.

So, you can see that there is quite a lot of history attached to the place, and that formed an important part of this particular course. Another big difference between this and other courses was the opportunity to stay in Gaelic-speaking households, where we at least had the opportunity for total immersion – something which would be not so easy to set up in many other places in the Highlands as they don’t have the population of Gaelic speakers which Lewis has – the Outer Hebrides has the largest remaining population of Native Speakers of Gaelic, many now getting older but not all!

So you can see that, unlike the courses at the Gaelic college and other courses elsewhere, this course was not entirely classroom based. The mornings were indeed spent in the classroom where the lessons took the form of the Ùlpan method, one unit before morning coffee and one after. We had coffee (and biscuits and cake!) in the café, where they also fed us at lunch time with excellent soup and filled rolls. Most afternoons we went out and about in the Ravenspoint bus to learn something of the history of the area, and these trips were led by John Randall who is an expert on the local history and who also gave us the history in Gaelic – thus adding not only to our knowledge of the history of the area, of which I knew very little before coming on this course, but also giving us even more of a Gaelic experience. As John is also a learner, it was quite an effort for him to do all this in Gaelic and we very much appreciated that. There were also afternoon visits with local Gaelic speaking people, when we were also right royally fed!

Three of the evenings were also spent in Gaelic activities in and around the Ravenspoint building – although we were given two evenings off when we had time to do our homework from the course…. It was all go in the best possible way!!

Two things truly stood out for me. One was the Gaelic service held on the first Sunday we were there. Gaelic psalm singing is very special and unique, and it was a great privilege to be invited to the church to take part in it. 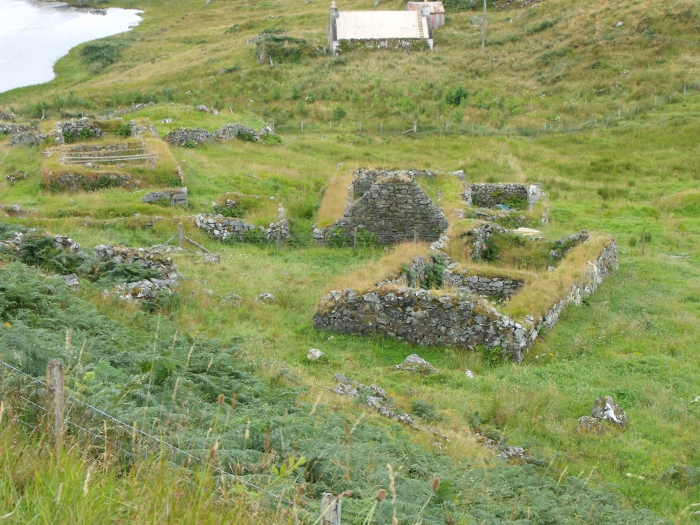 The other was a hike over rough ground to the deserted village of Stemerway. There we saw not only the ruins of a 19th century township which had been cleared, but also the ruins of a newer village which had been built and occupied illegally by “land raiders” in the 1920s when congestion in the townships was at its height. The spot where Stemerway is situated is wholly idyllic and although one appreciates that they would have had to work very hard to survive (but at a time when most people had to work pretty hard – physically much harder than nowadays!), and everything they couldn’t produce for themselves would have been brought in by boat, life was probably pretty good there. The township of Orasaigh nearby was also land raided at the same time but they received government recognition and therefore roads and electricity, thus enabling it to grow, but Stemerway didn’t, and eventually the five families who had settled there dwindled to one and then none. It is a very poignant place and we spent some time there. We also all drank out of the well which had belonged to the grandfather of the lady with whom I was staying – which somehow brought the people of the place to life in our minds. 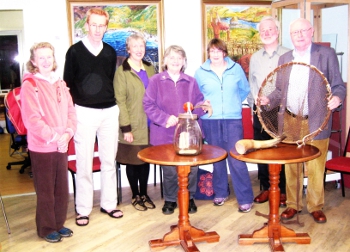 There were seven of us on the course – my friends and fellow members of our Gaelic choir from round here, Susan and Maureen; two Irish speakers one of whom, Kevin, was at Sabhal Mòr the previous week and I had met him there; Fiona who I first met at the college when we were both setting out on our Gaelic learning journey; and Innis who is a member of one of the Skye choirs. The Gaelic world remains quite a small one…!

My best memory though is going to be sitting in the upstairs window in John Randall’s house, sipping his excellent whisky and looking over the Minch at Stac Polly and the hills of home – and Trotternish on Skye where I had been the week before…..

[Photo of students by Donnie Morrison; other three photos by Clarinda]