A Gaelic weekend at Glencanisp Lodge

Last week, I was invited to take part in a weekend of Gaelic learning which was held at Glencanisp Lodge. I thoroughly enjoyed the whole thing…

Glencanisp Lodge used to be owned by the Vesty family and was I gather used for holidays and shooting parties. It was a classic Victoria hunting lodge which had a rather hideous extension added in the 1930s. The house was bought by our community under the auspices of the Assynt Foundation when the Vestys found that they had to sell a big chunk of the estate they owned up here and so in 2005, in a community buyout that became a landmark event as it was the first buyout of this nature, 44,000 acres of land and Glencanisp Lodge became the property of the local community – which is quite a responsibility really as we now have to leave the estate in good working order for those who come after us!! 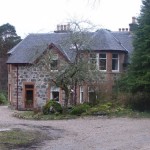 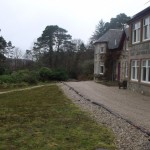 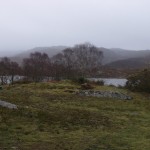 I hadn’t been down to the Lodge for some time. A few years ago, I answered the call for help to get the place sorted out and cleaned up so that it could be used. Even then, there were plans afoot to renovate and give the place a jolly good helping of TLC which it badly needed. I scrubbed and cleaned three of the small bedrooms which used to be servants quarters, along with their bathroom, and we put in some basic furniture so that the rooms could be used for a writing retreat which Mandy had planned for that year. Downstairs at that end of the house was a big Victorian kitchen, complete with back stairs and I felt that it was the nicest part of the building – with its “gentleman’s” bedrooms, gun room and general air of Victorian gentility. That of course was only my own impression – I was brought up in a Victorian house – albeit not nearly so grand – and it felt rather like home to me! Other people probably didn’t share my feelings for it!!!

As a member of the Assynt Foundation, I had had sight of the plans for the renovations of the house, and at the time I felt rather disappointed that the plans meant that the Victorian part of the house would basically disappear and I feared that the whole character of the house would be spoilt. Well, I really needn’t have worried. While I was down there last weekend, I took the opportunity to have a good look round, and I was very impressed with what I saw.

Yes, it is true that the rooms I had so painstakingly cleaned had now gone, although the bathroom with its big Victorian bath was still there. Instead of one big kitchen there are now two beautiful modern well-equipped kitchens – one in what used to be a big “playroom” at one end of the house, and the other smaller one replacing the Victorian kitchen. I think that the smaller one is probably for the self-catering side of things and the bigger for bed and breakfast guests and functions. The comfortable sitting room is still there but there is now also a big dining room, and from what I saw of the bedrooms, they are now all beautifully appointed with big comfortable beds. The whole place had a happy feel to it – as though the house itself, which had stood empty for some years before being bought by the community, had come to life again and was pleased with its makeover.

The Lodge is available for staying in for holidays, but is also there for functions such as weddings – it would be a marvellous spot to get married in, sitting as it does in such an attractive part of the estate overlooking its own loch with hills behind – but it is also there for the sort of gathering that we had last weekend.

The weekend was planned and organised as a bit of a joint venture between Còmhlan Ghàidhlig Asainte and Comman na Gàidhlig – normally affectionately known as CnG (pronounced “krack”). Shona Campbell from CnG had set the whole thing up for the benefit of the people taking the Ùlpan courses which have been going ahead around here. I think I have mentioned Ùlpan before in my blog posts, and I would still say that the jury is still out as to whether the system actually “does what it says on the tin”, and gets people speaking Gaelic quickly and without the need to learn any of the rather complex grammar. Be that as it may, there is no doubt that the students – and I think the tutors – thoroughly enjoy the lessons. One way and another, I have done several blocks of Ùlpan units, and I have found them quite fun – but then I am advanced enough that very little in the course is new work for me so that I am coming at it from a different angle. I have no idea what it would be like for someone who is completely new to the work! For this weekend I was invited along to help with the learning, and I hope that I was useful to the other students in this.

Our own James Graham, who takes one of the local Ùlpan groups, was one of the tutors for this weekend, and the other was one Alisdair MacLeod, a Native Speaker originally from the Isle of Lewis but now living in Strathnaver – he is certainly a hero in the Gaelic cause as he travels every week from Strathnaver to Kinlochbervie to take the Ùlpan course there – a not inconsiderable journey, especially in winter. He also teaches in Thurso. My friend and fellow choir member from KLB, Susan, made the trip down to Lochinver for both days and one of her fellow students also came down for the Saturday afternoon – which again shows real dedication to the cause as it is a good hour’s drive from Kinlochbervie to Lochinver. Not everyone was able to attend for both the days, but the weekend was very well attended overall…

For the first session on the Saturday, we divided into two groups for an Ùlpan unit and I stayed to assist with the smaller of the two groups doing unit 36 – I don’t know what unit the other group did, but they are a bit further ahead. I really enjoyed working with this group from the comfort of a big leather settee in the sitting room, but after a coffee break, we all got together in the big dining room for a “cearcall còmhraidh” or conversation group. Here Alisdair taught us useful phrases and sayings of a conversational nature and we had a session similar to this on the Sunday morning, but proceeded by the singing of the opening of Psalm 23 in the Gaelic psalm singing style with Alisdair acting as Preceptor. Gaelic Psalm singing is a very special, powerful thing – this is the second time I have taken part in it and I always feel very honoured to be given the opportunity to do so. Afterwards though, Alistair taught us some of the not so polite phrases and sayings which he remembered from his childhood – things like the Gaelic for “shut up”!! I have hopes that I would never really need to use such phrases as I no longer have young children

On Saturday evening, there was a small and I gather quite quiet cèilidh where James sang some songs, but unfortunately I had had to leave at about 5 o’clock due to extreme tiredness – something which I rather regret as it would have been good to see the whole thing through.

Maureen had made some exceptionally good tomato soup for this event, and James’ mother had spent the evening before and the whole of the morning making sandwiches and baking cakes and scones – all of which was very much appreciated by the students. There is nothing like learning Gaelic to give one an appetite… 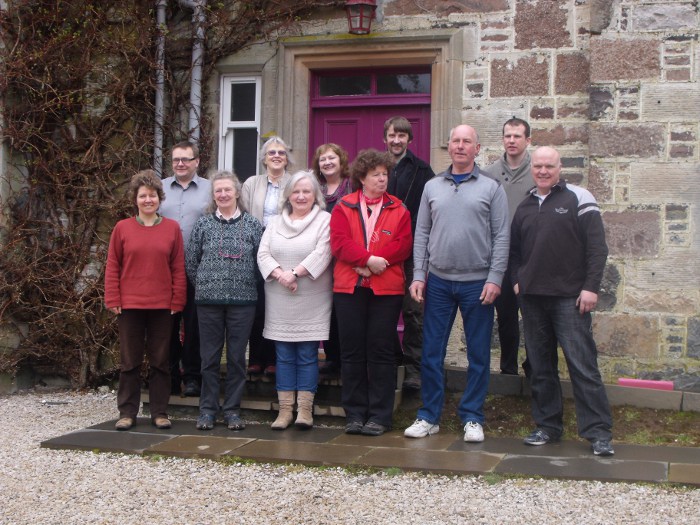 This entry was posted in Social events and tagged Gaelic, Glencanisp Lodge. Bookmark the permalink.