Great fun in the woods 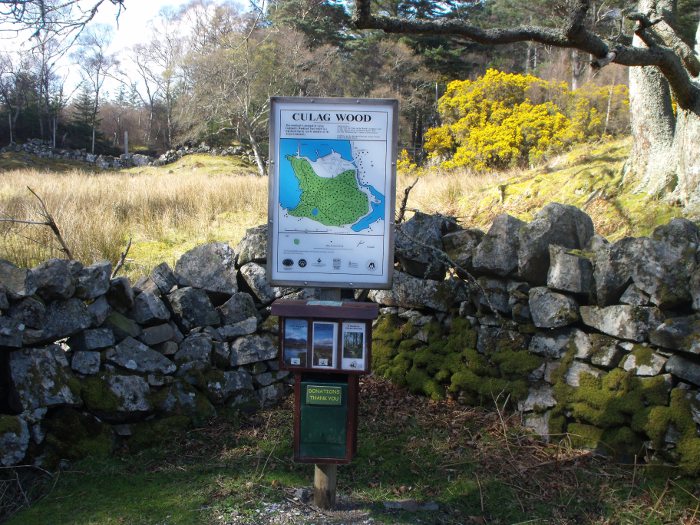 As I mentioned at the end my last short blog post, I went down to Culag Woods last Saturday afternoon to take a small part in the Great Easter Egg Hunt – which was of course organised with children in mind and, as I walked down the Brae, I could hear delighted shouts coming from within the woods.

Culag Woods is community owned – it was bought by the community shortly before we arrived here in 2002, and it is very well set up for both recreation and education. The over-sized, wooden insects which abound in there are terrific and a great way to educate children and adults alike without putting them off! Over the last year or so, new paths have been put in which, although I feel are a bit of a scar through the woods, make walking through them a lot more easy than the old paths which were basically mud and forest bark. They are as near to all abilities paths as could be in a place which is rather up and down – but I feel sure that a strong person could now wheel a wheel chair through most of the woods, thus making it accessible to more people. Certainly, without these new paths, my friend, Susan, could not have made it into the woods as she has dodgy knees – but with the aid of a stick, she was able to make it down to the White Shore with Cath and me. 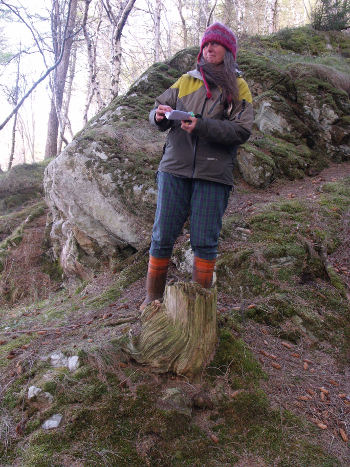 I met them in the second of the two car parks which serve the woods. As the instructions were for people to park in the bigger of the car parks – the School Car Park – there was room enough for Susan to park and we set off strolling along the new path taking our time and enjoying the nature which surrounded us. It was indeed a perfect afternoon for a walk in the woods being as it was both sunny and very sheltered in among the trees. I was of course on home ground here, so acted as guide to Susan and Cath who both are Ullapool based. As we went along, we were overtaken, run down or just cut up by small groups of children all clutching bags of bite-sized, gold coloured eggs and all giving us a cheerful “hello” as they busily pursued their hunt for chocolate treasure – evidently there were also chocolate chicks to be found which were an added bonus if you were lucky enough to find one. Such was their diligence that I doubt very much that there were any eggs missed! Lyn told me next day that she and her cohorts had been out in the woods since 12.00 that morning hiding the eggs in plain sight!

As we were going slowly, we were also overtaken by adults, all in a happy mood and all heading down to the White Shore where a barbeque was happening. When the three of us arrived down there, burgers and sausages were already well-cooked and smelling very appetising. But it was freezing cold!! The breeze was stronger here and blowing straight off the Bay on to the shore! Parties of adults were grouped together under the trees trying to catch some shelter!! Even close to the barbeque, it wasn’t any warmer. Of course, the children and dogs didn’t notice the cold and were rushing around the place, the dogs in and out of the sea – shaking themselves off as they ran around the groups of people. All great fun and very companionable as everyone knows everyone else, and the crac flowed freely. 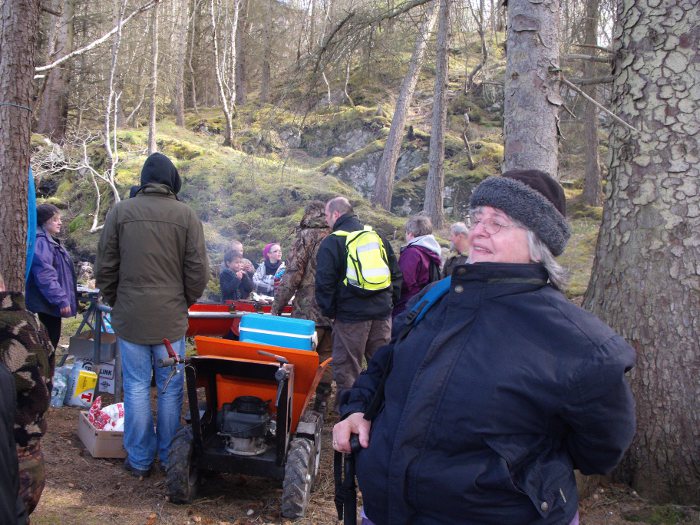 Anna made a welcoming speech and announced that the wee competition for the children was about to be judged – they had set it up on a knoll slightly out of the wind. By the time I got up to the site, it was all over so just now I don’t know what it was about or who won, but I hope to be able to get this information as Anna’s daughter, Rowan, promised to send me a couple of photographs to put up on this post – which will be done as soon as I get them.

The main reason for me to be there was that the choir had been asked to come and sing a couple of songs. When it was first mooted just before Easter, only the three female tenors had said that they would be available – it being right at the end of the schools’ Easter break, but as it transpired, six of us were able to be there – three sopranos and us three tenors who in this instance sang an alto part. I find the alto line somewhat high for me in most instances – getting “up” to a middle B is a bit of a push for my voice! The plan originally was that we should sing down by the shore, but really conditions were not suitable down there for singing – for one thing, our voices would have been whipped away by the breeze – so the decision was taken that we should sing up by the wigwam which forms part of a wee children’s play area. We received this news with somewhat of relief, and as soon as we had partaken of some barbeque and relieved our throats with juice, we headed back up the path – the play area being roughly half way back to the car park. The other planned entertainment was Adam and Romney with their puppet show, which they set up while we were singing.

We just sang two songs – “Chachan mo Gaoil” which is in two parts, and “Sìos dhan an Abhainn” which is a translation of the Negro Spiritual “Down by the River” which was made popular in the film, “Oh Brother Where Art Thou.” We have made our own version of this song with the sopranos improvising a descant part, and we sing it quite often. As always, the performance was warmly received by those folk scattered around the play area. I sometimes think that it isn’t so much that we sing the songs so wonderfully well that they are always so well received, but it’s the songs themselves which are beautiful in their own right and often the arrangements for choirs are just gorgeous. Singing in Gaelic is quite different from singing in English (or German or Latin or whatever language for that matter), and the language seems to lend itself to some wonderful, rich harmonies. Of course, singing such songs in the woods is an added bonus – the trees seemed to make a really good acoustic and just the romance of the surroundings added a whole different dimension to the songs. All six of us really enjoyed ourselves and felt that those of the choir who couldn’t turn out for this really missed something a bit special. 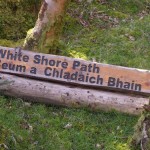 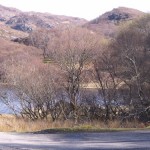 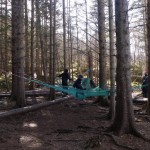 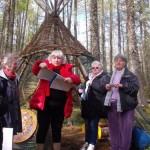 The directors of the Culag Woodland Trust, who manage the woods, were very happy that we had managed to come in the end. Evidently, they had received money from a Gaelic organisation – I didn’t hear which one – for help with paying for the new paths but with the proviso, naturally, that Gaelic would form a part of what goes on in the woods. There are new Gaelic signs all over the place – all made locally by Charlie Russell [see photo of his flower pot men in earlier blog] – but having us come and sing in Gaelic meant that they could now “tick the box” that Gaelic had formed part of an event which took place in the woods. We had no problem at all with this, and will be more than happy to turn out again for another similar event – and maybe when the other members of the choir hear what a good time we had, they will want to come too!!

So there we are – the Easter Egg Hunt was a great success all round. The weather had been as kind as anyone could hope for at this time of year, and good fun was had by all – especially the children and that was the whole point.

Next morning, I opened the curtains to see snow on the ground outside! Snow at this time of year is not infrequent; it even has its own name – Lambing Snow. We had hoped that the lambing snow had come early this year when we had snow at the end of March – but no, here it was bang on time for the start of lambing in this area. In fact, we had seen the first and very small, new lamb by the roadside when going up to Achnacarnin last week for our weekly Gaelic session. There have been lambs in the in-bye of course, especially on the east side where they lamb very much earlier than here, but this was the first lamb born on the common grazings which any of the three of us in the car had seen. Spring really is here at last… 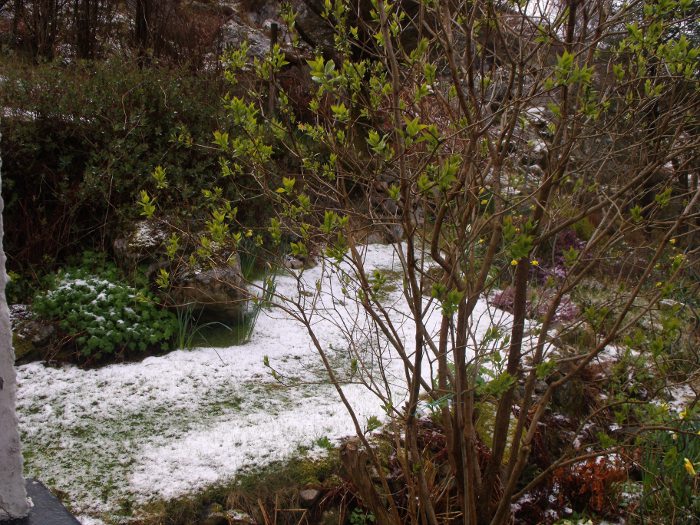 This entry was posted in Choir, Local area, Nature. Bookmark the permalink.