As promised, I am moving aside this week in favour of guest blogger, Romany Garrett. She is working as part of the project which we have afoot to grow trees from seed to plant for the future – not only for this area per se but also in our own small way, to help aid this planet of ours and try to undo some of the damage done by man in recent years. Important work to be sure, needing all the support we can give it…

As the tree nursery outreach officer for CALL (Coigach-Assynt Living Landscape) I hope to encourage people to take up rural skills, offer training opportunities, and make woodland management, woodworking skills and craftsmanship become an integral part of our lives. This will hopefully come about if people feel more connected to their woodlands and wildlife. CALL was launched in 2011 and is a partnership project with surrounding landowners. The projects run by CALL aim to have social and environmental benefits for the Coigach and Assynt area. 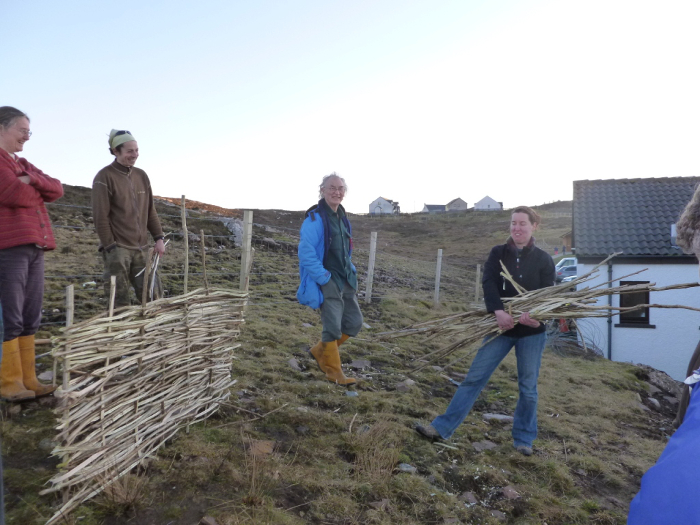 I’ve been running a programme of activities starting with the children and the less-able and hopefully reaching to all sectors of the community. The aim for the tree nursery is of course to provide Assynt and beyond with an opportunity to buy locally produced native trees. By using local genetic stock the trees will be conditioned to their surroundings and better able to cope with the climate here. Nick Clooney the nursery manager has sown the first seeds in the polytunnel and the rowan seedlings are already coming through. Here are highlights of some of our activities:

On Friday 25 January, the Lochinver branch of Brownies and Rainbows went to collect pine cones in Culag Woods. It was a fine but chilly day as we set off, after a quick presentation, with nearly 20 girls into the woods. They gathered pine cones from the woodland floor, collecting mainly the closed ones as they still have their seeds in. The children enjoyed collecting and searching through the woods and were very enthusiastic about their finds. Many of the cones were from Scots pine trees. The cones will be dried out and then the girls will come out to the Little Assynt tree nursery, shake out the seeds and plant them. Once they’ve grown into saplings, the Brownies and Rainbows will be able to take them home and hopefully start to grow their own woodlands!

On Thursday 21 February, we held Hazel Celebration Day at Stoer Village Hall. Hazel was chosen as it has played one of the biggest roles in the development of our civilisation than almost any other plant species but goes largely ignored. From walking sticks to hurdles, from cookies to charcoal, hazel trees have been used in one form or another for thousands of years. This celebration of the hazel was aimed at raising our awareness, appreciation and understanding of the tree.

On 27 February, we had a wooden spoon carving day. Birch coppiced from a local croft was sawn, whittled and worked on using traditional tools. The idea was to use the wood sustainably in a simple and safe way. Gradually through the day, the blocks of wood were turned into spoons without the use of machinery or electricity. Chris Goodman proved an excellent teacher and lots of fun was had and most people managed to make two spoons. At the end of the day not only beautiful objects were made but also useful ones. One spoon was even finished in time to eat soup with at lunch! 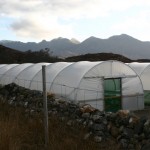 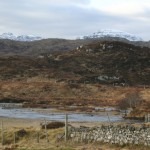 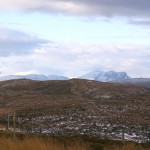 Naturalist Ian Evans of Drumbeg came to give a short presentation on the unique and rare qualities of hazels in Assynt. He explained that they were home to rarer mosses, liverworts, lichens and fungi – even that some species like the lichen Tree Lungwort are more luxurious here than anywhere else in Europe. Ian Evans called for better management practices and awareness of the special nature of our trees now known as Atlantic hazelwoods. He suggested that a more sensitive approach should be taken as drastic coppicing techniques combined with overgrazing may eventually kill a tree off. The day moved on to a film screening of ‘Intimate with Hazel’ by Bill Ritchie. Refreshments took the form of hazelnut cookies and nutella cupcakes. We then had a spell in the sun while some people tried their hand at hurdle making while others planted hazels and read out snippets of folklore. We went back inside again, this time with Historic Assynt and Dr Graeme Cavers of AOC Archaeology. He gave a presentation showing that hazel has been used in Assynt for at least 3300 years. The hazel from the burnt mound at Stronecrubie is dated to about 1300BC and also to 800AD and the hazel from Stoer Broch to about 50BC. Slides were shown of ancient hurdles and woven hazel used in house walls, floors and roofs. As the hazel is the Celtic tree of knowledge, it was appropriate that the Hazel Day taught us many things: perhaps most importantly, not to take the hazel tree for granted just because it is small and has always been here. The completed hurdle was taken home at the end of the day to be used as a wind break in a participant’s garden.

Currently, I run regular fortnightly volunteer days at the nursery. On our first project day we all unloaded a trailer load of muck into one of the polytunnels. With muscles and forks at the ready the work was soon done and the volunteers had a well-earned cup of tea and biscuits. We held a volunteer day on Thursday 28 March. If you happen to be in the area, please come along to our next event.

Recently people that are less-able came out to the nursery to give us a hand. Holly seeds were extracted from the berries and rowan trees were healed into the ground ready for shelter belt planting. There is a lot to do at the nursery and it was great to have the extra help. I hope they will come out again once the weather gets a bit warmer.

We have started shelter belt planting along the edge of Little Assynt field. Thanks to all those who have helped so far with this. The shelter belt is being planted to help prevent the strong winds damaging the young trees and polytunnels, also to provide food for wildlife and is a possible source of seeds for the future.

Meanwhile I have also been working with three local primary schools on the meadow patchwork project. This is a European project run by plantlife to try and create a huge patchwork quilt of everyone’s work. A display of the quilt will be at Assynt Leisure on 28 June for a week.

Before we sign off, consider this: if you strip your house of wood, what will you have left? What will you eat on or sleep on? I think most of us will admit that is a struggle to survive without wood. Every day use of wood should be directly linked to the trees that are growing locally in the woods and yet many people never make this link. I hope to hold many more events with the aim of reawakening peoples’ interest in wood and woodlands.

[Photo of volunteers by Romany; other photos by Clarinda]

This entry was posted in Local area, Plants and tagged local woodlands, trees. Bookmark the permalink.