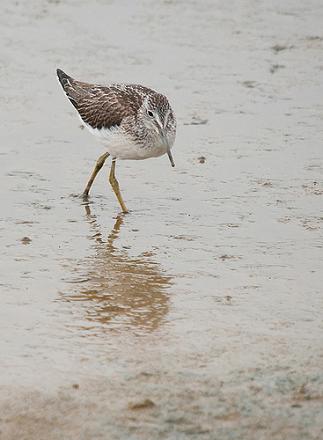 The 22nd May was the date for what is becoming the Field Club’s annual Bird Race.  ‘Bird Race?’ I hear you ask. ‘Isn’t that something to do with racing pigeons?’ Not in our case. What we do is go out and about in the countryside and count as many species of birds as we can in a given time.

On this particular occasion, we met at Stoer Village Hall, where there is good parking.  It was blowing a gale with showers in the forecast, so we knew that the turn out would not be spectacular – and we were right. All the same, seven intrepid, hardy souls turned up, and that was perfect, as it meant that there could be three teams, thus making more of a competition. After all, there was a prize on offer!

I was teamed up with my friend Gwen, but unfortunately for us the other two teams consisted one of bird experts, and one of novices who had come along to learn – and so went off with our ranger, Andy! Gwen knows heaps more about birds than I do, so I went with her in the capacity of recorder rather than anything else.

We started well enough, as I spotted a Greenshank on the first loch we stopped at – a good omen you might think! But as time went on, our list didn’t grow very fast. We blamed the wind, which had now really got up, and those showers which had arrived: any self-respecting, small land bird was surely taking shelter!

We were finding that birds flying against the wind were easy to identify (they were going so slowly that it wasn’t difficult to pick them out with the binoculars!), but when the wind was up their tails, birds went past far too fast for us to recognise! While we were standing together with Andy, Brenda and Sharon at one point, Andy was able to record a cuckoo speeding past which none of the rest of us even saw!

The race took place round the Stoer peninsular, which includes a nice mix of lochs, sea-shore, gardens and wild places. We went up to the lighthouse at Stoer Head, which is of course a Stevenson lighthouse – not a very big one as it is quite high up, but apparently its light can be seen 20 miles out to sea. Here I had rather a terrifying moment when Gwen went quite close to the edge, and I realised that there would be nothing I could do to save her if she were blown off (which is something that has happened in our part of the world, believe you me!).

We saw a gannet and some fulmars – the sea birds all seemed happy enough in the wind – but we also saw the most gorgeous Brimstone Moth, sheltering in a tiny v-shaped bit of rock (sadly, we couldn’t count that towards our final score). Unfortunately it was far too windy for photography, so I had left my camera at home. I would have loved to get a photo of the moth.

Gwen and I struggled on manfully, and at the end of the two hours we had counted 31 species and returned to the Hall for lunch and the reckoning. Andy and his team won the not-to-be-sneezed-at prize: a box of biscuits and a copy of The Birds of Assynt.  They had counted 41 species, and the other team had 40, which included a Merlin. I wish we had seen that!

Having decided that it wasn’t a day for sitting together eating our lunch outside, we went our separate ways. Gwen and I went up to the bay at Clashnessie, where a Franklin gull – a very rare vagrant in this part of the world – had been spotted the Wednesday before.  However, the bird hadn’t been seen again since that occasion, so this was rather a forlorn hope. While we were there, though, we did see a flock of Red-breasted Mergansers and also a pair of Common Scoters – a bird not so common up here – so we felt more than rewarded; and anyway, it is a lovely spot for a picnic, even if we didn’t get out of the car!

After lunch, Gwen took me a wee bit further up the road to see some Early Purple orchids which she had found there. They had gone over slightly, but were still worth seeking out!

I arrived home with an hour to spare before popping out again for my art class. I felt distinctly wind-blown, but very satisfied with a most enjoyable day.

This entry was posted in Animals, Field Club and tagged birds, Stoer peninsular. Bookmark the permalink.

One Response to Bird Race