In praise of our landladies 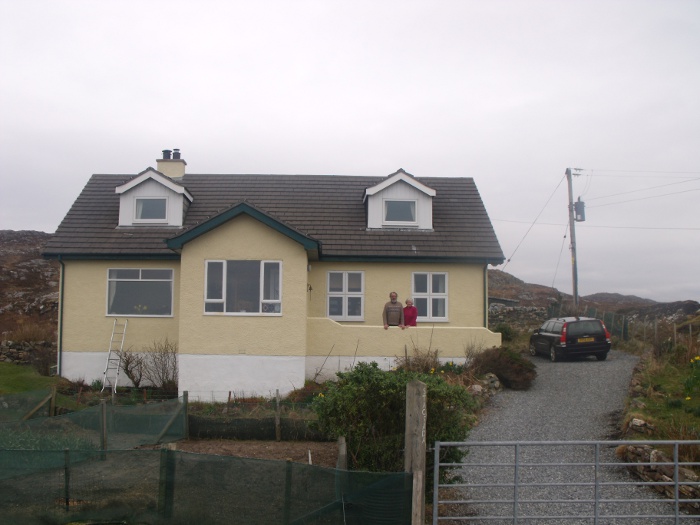 On 1st April, this area opened for business. In the nature of things here, not everywhere is open all year round, unlike the businesses providing for visitors in places such as Aviemore. Some of the B&Bs – such as The Rose in Lochinver and our Mission – are open all year round, which is very useful to us as it gives somewhere for people who come here to give talks or what-have-you to stay. Enough of the holiday lets round here are also available all the time to give a chance for people to come to stay for Christmas or the New Year, but most of the hotels, etc. are shut in the winter. But now, everything is up and running – all the B&Bs, tea rooms, gift shops and galleries, etc. have opened their doors to welcome the visitors to the area.

With that thought in mind, I went to visit my good friend, Julie, before she got too busy with her B&B to take the time to sit and chat. It had been her birthday a few days before, and someone had given her a box of scrumptious Thorntons’ truffles which she desperately needed help consuming, so we spent a delightful morning drinking coffee and sinfully enjoying a few yummy choccies – what a way to spend a few hours! 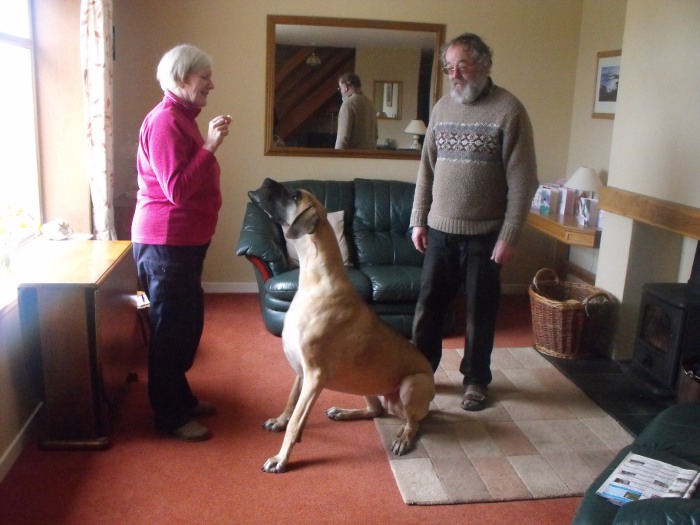 While we were chatting, the subject of her business came up… We were talking about why she had had to start a B&B business – apart of course from the obvious need to make money. Julie is a fully qualified homeopathic practitioner and left a thriving practice behind her when they moved here, and I was wondering why she thought it was that her practice hadn’t really taken off up here. The answer really is quite obvious – lack of people!! She does have patients who come to seek her help, but not enough to provide enough income for her and her husband, Howard. Howard was a farm manager before taking an early retirement, and he set up as a gardener when they arrived here. We were his first customer and he actually created our garden as it is now in that he had the skills and was able to do all the heavy construction work – something which Chris couldn’t do. Unfortunately, now life has caught up on him and his health is not so good and such physical work is difficult for him, but he still spends the summer cutting grass – which is a boon to us all – especially the owners of the holiday lets who need to have the grounds kept tidy round the houses.

So, three or four years ago, Julie opened her home for business. They have two spacious and very attractive upstairs rooms for their guests and they live downstairs. She actively enjoys certain aspects of the job – as she says, and here I quote, “the world comes to your breakfast table!” She says she has gained a huge insight into other societies and cultures as they have received people from all over the Continent, Eastern Europe, the US and Canada, New Zealand and Australia into their home – as yet they have had no-one from Asia or the Near or Far East, but she is hopeful that that will happen in the future. 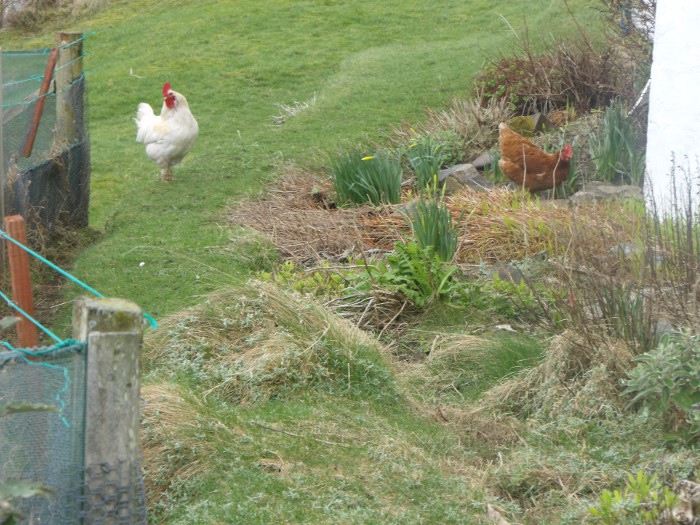 The downside is of course that it not only does tie one to the house, but also is darned hard work! It upsets her sometimes when her guests with the best will in the world, express their envy that she can live a life of ease in such a beautiful place!! I know from my own experience as a full-time housewife how hard the work can be and how little people appreciate that – things domestic tend to be under-rated and frequently belittled in our society. Julie was telling me that the breakfast part of the job, which most people would probably consider the hardest part, is in the fact less of a problem. You can get into a routine with providing breakfast – keeping things warm while the rest cooks and what-have-you. When on holiday and maybe with a day out on the hill ahead of them, people tend to want a sustaining breakfast and Julie offers a breakfast that would do a posh hotel proud! A first course of cereals, muesli, fruit or yoghurt and afterwards a choice between full Scottish, scrambled eggs with smoked salmon, porridge, then tea, coffee and toast with home-made marmalade – you name it and you’d probably get it!! All made from fresh, locally produced stuff and with the eggs coming straight from Julie’s own free ranging hens. But it’s after the clearing up from breakfast is done and the guests have gone that the real work starts… 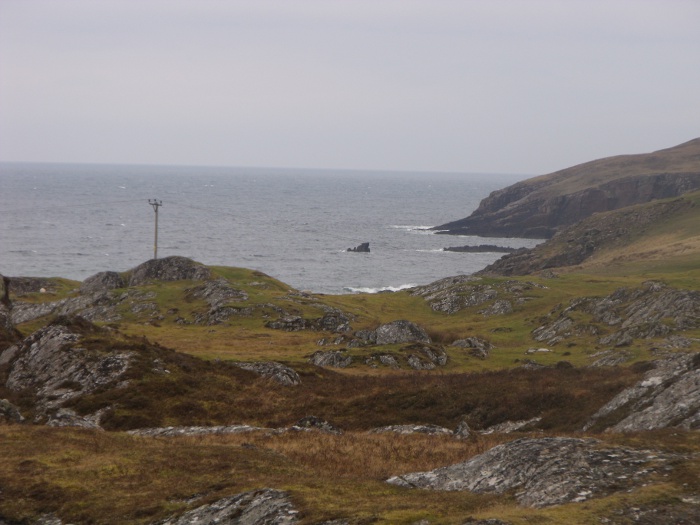 Bed stripping is the first job, followed by cleaning the rooms and re-making the beds for the next people – who sometimes arrive rather early if they don’t understand the system that says that 4 o’clock in the afternoon is the earliest one should turn up! Naturally and quite rightly, when a person comes to stay in a place that offers bed and breakfast, they can expect to find a place that is spotlessly clean and tidy – so the public areas of the house need to be dusted and vacuumed every day and of course the bathroom facilities have to be properly cleaned. After that comes the ironing – the bit that Julie reckons to be the worst part of the job!! I have to admit that I enjoy ironing – the once or sometimes twice a week that I need to do it – but the thought of ironing bedding every day just makes my mind shrink into a blob of quaking jelly… Quite honestly and with the best will in the world, I don’t think I could cope with that! Of course, the bigger guest houses and the hotels employ people to do this sort of work – which makes for at least seasonal jobs in a place where jobs don’t abound – but for anyone with just one or two rooms it would not be financially viable to pay for help, or even to send the bedding to the laundry in Ullapool. And all that is what makes running a bed and breakfast establishment very hard work. I know I couldn’t do it!!

There are at least some advantages though to doing this work – apart from the obvious – one is that every year the local “tourist providers” go on a Grand Day Out. Last year, by courtesy of Calmac, they left Ullapool on the early ferry for a coach tour round Lewis – complete with breakfast on the boat, a soup and sandwiches lunch and a glass of wine with supper on the late ferry home – a day trip to the islands being possible in the high summer when Calmac run three ferry sailings a day three days a week. This year it was an early trip to Inverewe Gardens,  where they were taken on guided tours in small groups by the men and women who run the gardens. Evidently, they saw parts of the gardens which are hard to find on your own, and they were lucky enough to catch the early flowering of the rhododendrons and azaleas which the gardens are famous for. Well, after all the hard work involved with caring for the visitors who come to this part of the world, it is good that the landladies (and their spouses) get treated to a good day out! Whatever would we do without them?

So let’s raise a cheer for the wonderful, hardworking landladies of Assynt…! 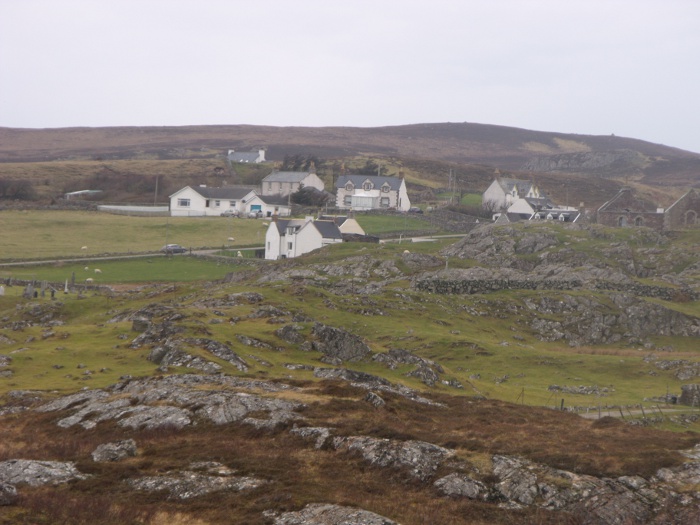 This entry was posted in Local area and tagged on B&Bs. Bookmark the permalink.