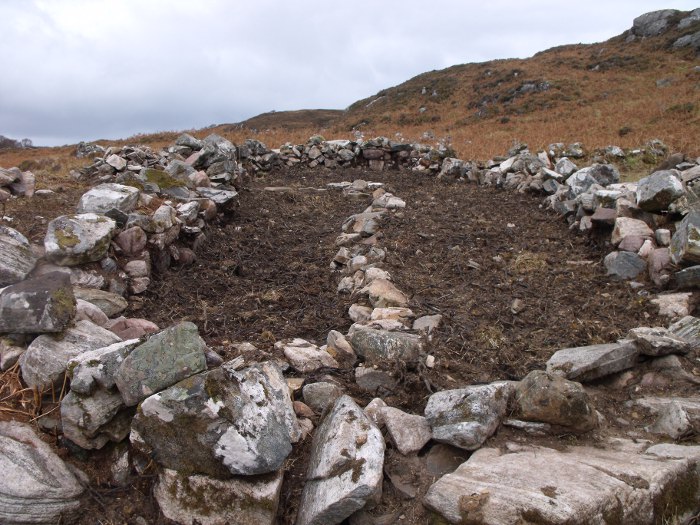 I have mentioned in one or two of my earlier posts about the archaeological diggings which have been going on over last summer – i.e. the digs at the chambered cairns near Loch Borallan, the broch at Clachtoll and the so-called “long house” at Glenleraig. I seem to recall that I also mentioned that I have not had the opportunity to visit any of these sites. Well, Friday before last, I got the chance to go to one of them – the house at Glenleraig.

On the Thursday afternoon, I received a phone call from Mandy Haggith asking me if I could come up to Glenleraig the next morning as they were in urgent need of someone with a knowledge of Gaelic – the reason being that BBC Alba wanted to do a short piece about the dig at Glenleraig for the news programme, An Là, and of course it is much better for a Gaelic news report if they have someone speaking Gaelic on it! Well, I knew little or nothing about the doings at Glenleraig, but I agreed to go in spite of the fact that it would mean missing my exercise class. I felt that it could be interesting, and also that it could be useful to learn something of what went on there before taking part in the exhibition in the Village Hall on the 12th November, which was going to be all to do with life as it might have been in that particular house.

Well, as it turned out, I was right on both fronts!

On the morning in question, Chris dropped me off at Achmelvic Bridge to meet Mandy – that was arranged partly so that Chris could have the car to go to the gym and partly because I actually had no real idea where the site at Glenleraig is – only the vague notion that it is somewhere near Nedd. The day was somewhat overcast, but because, as the chap on the radio put it, we are enjoying unremittingly pleasant weather just now, we had no worries about it raining on our parade. When we arrived at the rendezvous, Gordon, Sharon and Brenda were already there, but there was no sign of Eilidh Grant who was the reporter in question. However, we only had to wait about 15 or 20 minutes before she arrived, apologising for being late and thankful for the directions Gordon had sent her as she would otherwise have felt that she was about to drop off the end of the world – Nedd is somewhat out of the way even by our standards!

Camera collected from car, and we set off up the now quite well-worn path to the site of the dig. Gordon was first up to be interviewed, and what he had to say about the findings from the site and the conclusions that had been drawn from them was particularly interesting:

It was known that the site existed before the start of this year’s dig – the whole site, amounting to some 50 structures, had already been surveyed a few years ago, and historical record showed that it had been “cleared” in 1812 – i.e. the family that lived there had been evicted by the landlord, in all probability to make way for sheep. However, when the digging started, this turned out to be a far from typical “clearance” house. For one thing, the people who lived there were obviously not destitute – giving the lie to the normally held belief that families that were evicted from their houses during this notorious period in Scottish history were poor. Some would have been of course, but not all… 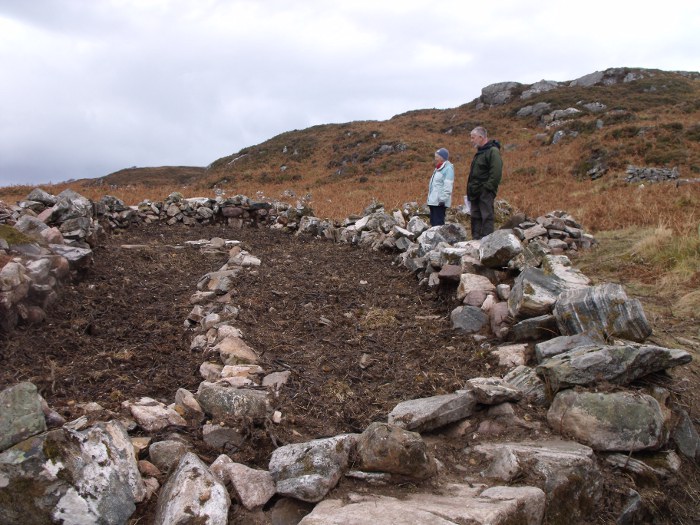 The reason whereby the archaeologists came to this conclusion was that there were some surprising finds. They found broken glass that could have only come from wine bottles, and enough of them to show that drinking wine would have been a not unusual activity, and there was also a very fine example of Staffordshire pottery found – a mug dated to about 1750. We wondered why such a probably treasured possession was left behind, but decided that it probably got broken in the rush to pack up their belongings – or maybe just got “lost in the move” – they might even have had more than one! A good boot was also found, and these things coupled with quite a large byre at the end of the house (it was a cattle based economy) have given rise to the thought that the people who were thrown out of their home in 1812 probably had cash enough to spare for what were then luxury goods.

Another interesting find was the nature of the fire place. It was, as was common then, in the middle of the floor of the living space. The archaeologists found two flues running under the floor out to the walls and meeting under the hearth – giving rise to the thought that these were for improved draught. This is the only house in Scotland where this particular design has been found. Another thing of interest was a seeming passage way running from the door alongside the byre area into the living area. The living area itself was not all that big, making me wonder whether there would have been box beds as are normally seen in taighean tugha, or whether they made their beds up every night as happened in medieval households. Gordon rather thought that there was no reason not to have had box beds, and I guess this is something about which we will never know the truth! After all, box beds have been around for an awful long time – the stone age equivalent are easily seen in sites such as Skara Brae on Orkney. 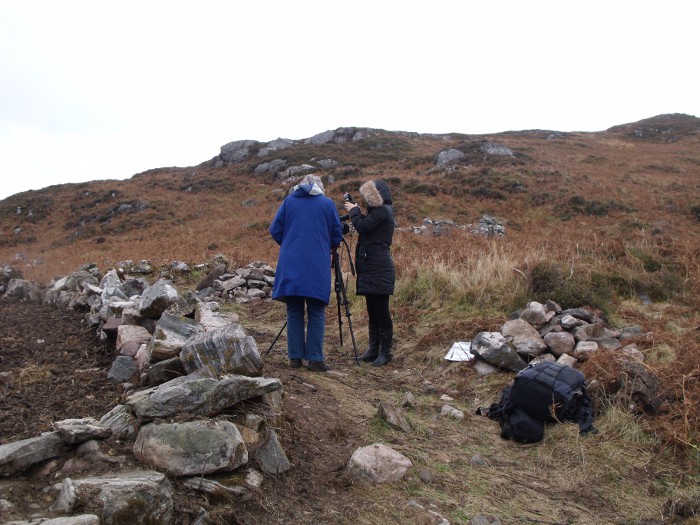 Anyway, Brenda followed Gordon, then Sharon and Mandy speaking about the finds and the work that had gone on during the summer and the plans for the future – all of which was done in English. Then it was my turn!! I was a bit nervous, but Eilidh put me at my ease and soon I was “miked up” and standing in the requisite place. Unfortunately, I couldn’t really answer all the questions she put to me – not in Gaelic nor English – due to total lack of knowledge, and I was certain that nothing but rubbish had streamed out of my mouth. However, there must have been enough in there which did make sense as come Monday evening the programme was put out with a nice little news report on the work at the site in Glenleraig – including me and some of what I’d said!! As is normal with such things, a morning’s work had been trimmed to a report lasting two and half minutes – and it rained!!

There was one thing very interesting for me which came out of this expedition and that was to do with protection from insects! Earlier on in the summer, my friend Morgana had told me that she was taking of garlic pearls to keep the midgies at bay. Maureen reckoned that that couldn’t be effective as she takes garlic all the time and the midgies still come after her. Well, we subsequently found out that it is the combination of garlic pearls and vitamin B1 which actually does the job and I started to take that combination, and within a very short time I noticed a difference – the midgies really weren’t bothering me and I wasn’t being bitten by other insects, in spite of the fact that I stopped using the insect repellent which for most of my life had been the only thing which had made summers bearable for me. However, now that autumn had arrived, I had stopped using the garlic pearls and vitamin B1 a week or ten days before going up to Glenleraig. Well, I was bitten all over my legs and picked off no fewer than five small ticks! That was total proof for me that the system works, and now I will take both garlic pearls and vitamin B1 tablets every other day for as long as I am spared! I would recommend that if you are planning a holiday in this area, start a similar regime – taking the pills every day for a week or ten days before coming up and keep taking them for the duration of your stay – it could well make your holiday a much more pleasant experience!

This entry was posted in Local area and tagged archaeological digs, house at Glenleraig. Bookmark the permalink.