Last week was International Wild Flower Week – did you know?! I had been hearing a buzz about this for a while, and receiving emails with attachments about the events. I had no idea what exactly it was all about except that it seemed that people, especially children, were being invited to make 15 cm square patchwork pieces in relation to this week. There were several workshops to this end being held in Caithness and, although I heard nothing about whether or not the rest of Sutherland or even Scotland was taking part, Assynt had definitely embraced the concept. Not surprising really considering the wealth of wild flowers there are here to celebrate. 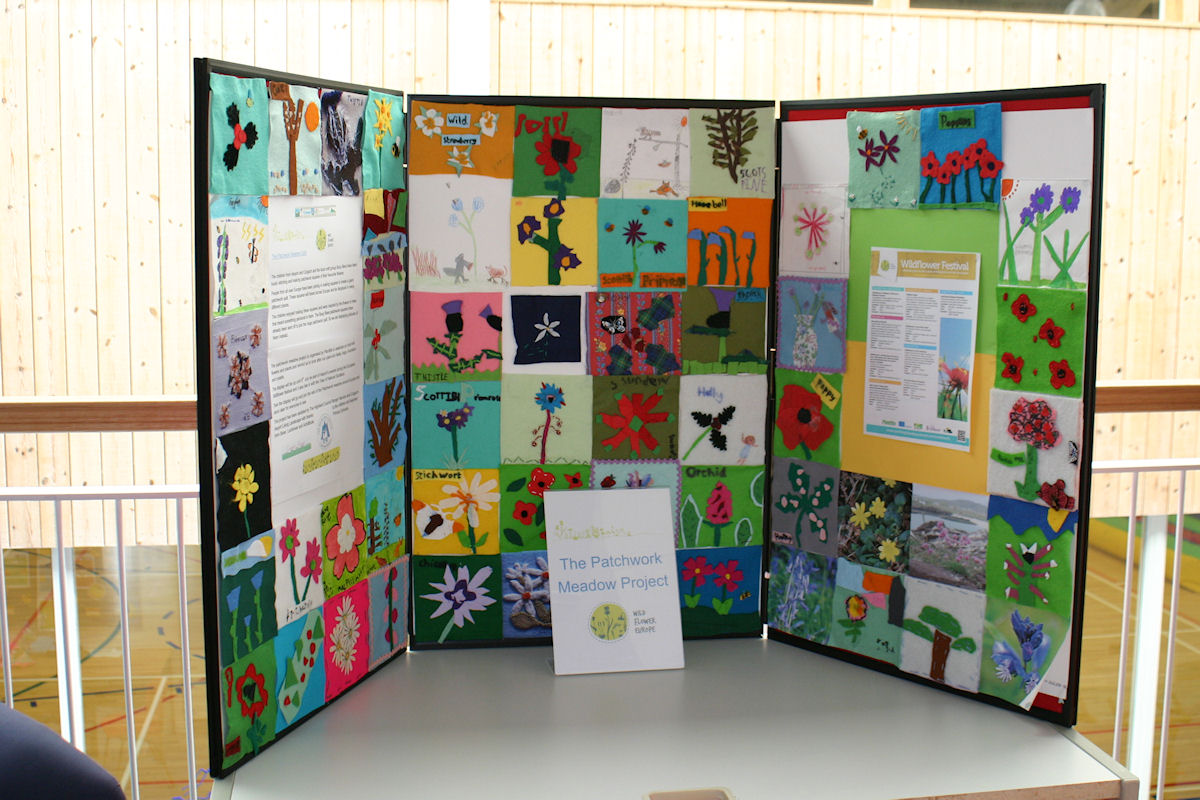 The triptych of patchwork squares done locally with contributions from all the schools including Achiltiebuie and also from our Craft Bees.

Patchwork is not my thing – although I might have been tempted to knit a square! – but I did choose to go along to some of the meetings. I went to the one last Friday evening, which was held in the Assynt Centre as Skerryvore, the well-known folk music group, had taken over the Village Hall. It was pleasing that more chairs had to be found as the space in the dining room at the Centre filled up. This was a talk given by Sona Anderson of Plantlife. She described herself as a “bio-archaeologist”, something of which I had never heard, but obviously this is a discipline to do with traces of plant life and pollen in the archaeological record.

As it transpired, this talk was more to do with the origins of the International Wild Flower Week, which started five years ago in Slovenia and is slowly growing out from there. Evidently they still have superb wild flower meadows there which they feel the need to celebrate through the medium of patchwork and given the tradition of embroidery in Eastern Europe, this is not surprising. The number of squares is growing amazingly, and for the main event held in Slovenia there is a big exhibition board to display them. One day I think it will rival the Bayeau Tapestry, and some of the work is really beautiful. Our display was somewhat smaller! Sona’s talk showed a number of the squares as part of the presentation which was basically a very superficial overview of the history of uses of plants. Some folk there, myself included, would have preferred more on this and less on the history of the Week itself, but it was a very convivial evening with tea and biscuits to follow.

This event had been proceeded by an exploration of the machair at Achmelvic which had been lead by our ranger, Andy Summers, and had been a success in spite of the rain. I have seen the machair on the Isle of Harris in full bloom, and really the one at Achmelvic just can’t compare – yet! The superb display of wild flowers on the machair at Rodel in Harris is set back from the shoreline, and has never really been tramped over by human feet. It is used, and always has been, for winter grazing, which is the best way of keeping fields of wild flowers alive and well. I have seen a picture of the Achmelvic machair taken in 1968 when it was entirely covered in caravans! It will take time and all the tlc we can give it for our machair to recover but with the careful management it gets, I am sure one day it will rival any machair anywhere – I just hope I live to see it!

Ian Evans gave a talk on Saturday evening on the rare plants of the area to which I didn’t go, but have heard that it was very interesting. Then he lead what was probably the main event of the weekend, which was a wild flower walk on the limestone substrate behind Inchnadamph. This proved a very popular event with 27 of us keen to see what Ian had found for us in the way of the rarer wild flowers. This doesn’t happen by accident, Ian and his botanist wife, Pat, had been out during the week mapping the presence of the flowers for our edification.

This area is very interesting in many way for both botany and geology because it has a limestone base, when most of the rest of the area is Lewisian Gneis, upon which the retreating glaciers left a load of detritus at the end of the last Ice Age. Inevitably peat formed over this, so now the land has quite a few familiar plants of acid soil, although not much heather, but with rocky outcrops upon which the lime loving plants grow. There are also trees such as Goat Willow growing here which are happier on limestone and are not really to be found in the rest of Assynt. (See earlier posts for references to the connection between this area and the work of geologists Peach and Horn.) 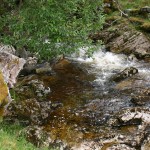 A Goat Willow growing by the rushing Traligill burn 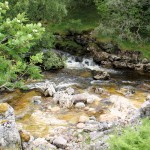 The confluence of the Traligill and the Alt an Pollan Droighean 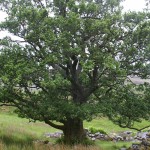 A rather splendid example of an Alder tree 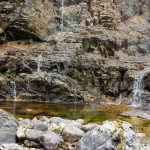 The splash pool at the bottom of the falls 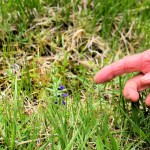 The vivid blue of the tiny Milk Wort with Ian’s fingers for scale! 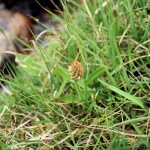 A Fragrant Orchid not quite in flower 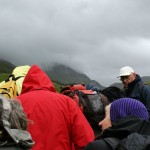 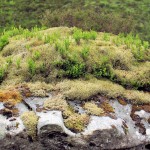 Mother Nature’s own way of doing things. We all wished we could create this combination of mosses and bilberry in our own gardens! 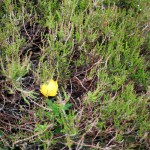 The bright yellow of a Globe Flower peeking out from the heather, which had almost certainly protected the plant form the grazing animals 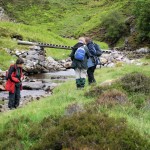 Heading back towards the bridge over the Traligill 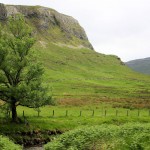 Journey’s End. Sron Chruibie taken from the bottom of the path. 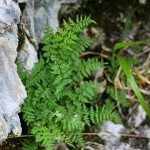 We set off up the path behind Inchnadamph Lodge which runs along the strath of the Traligill burn – Traligill being a Norse name apparently meaning the “Valley of the Trolls”! This is a fairly big stream which rises quite a long way inland, but having walked along it for a fair bit, with Ian pointing out many unusual wild flowers and ferns on the way, we turned off the path and headed towards our final destination which was Eas Ruigh an t-Sagairt – the Falls of the Shieling of the Priest – and there was a notably green bit of land just above and to the left of the falls which could easily have been glebe land. However, Dwelly gives the number one meaning of the the word “ruigh” or “righe” as wrist or forearm, so with body parts so prevalent in the Gaelic landscape, the name could just as easily mean “The Falls of the Arm of the Priest”.

We stopped for lunch in a delightful spot quite sheltered from the wind, and even had a glimmer of sun to cheer the day which had been quite showery. Moving on over the bridge across the Traligill, we struck along the opposite bank, where we really were “off path”, to the Alt an Glac Mòr – the Stream of the Big, Narrow Valley. Again there are many meanings to the word “glac” including things such as “breast” or “embrace” – e.g. fuar ghlac a’ bhais means the cold embrace of death – but nowadays the name would normally refer to a hollow in the land or the palm of your hand. Here we encountered the rarest of the treasures we were seeking, such as the Variegated Horsetail and the tiny Scottish Asphodel. We happily splashed about the stream taking it in turns to look at the plants with Ian having conniptions in case we accidentally trod on such rarities! The Falls itself doesn’t look very interesting when seen from a distance, but up close it is a very pretty area and one just made for a picnic, with a classic pool at the bottom of the fall of water.

This is where the guided walk ended and Gwen, Jane, Rona and I strolled back to the car park, taking our time and just enjoying the walk whilst rediscovering the plants we had seen on the way out. In spite of the day not being much of what we would have asked at the end of June, it had been warm enough albeit it rather windy, and was whatever really quite magical…

I realised that the spinning group had quite co-incidentally made our own contribution to this week celebrating wild flowers when we held a natural dyeing session on the Monday of last week. I will tell all about it in my next post.