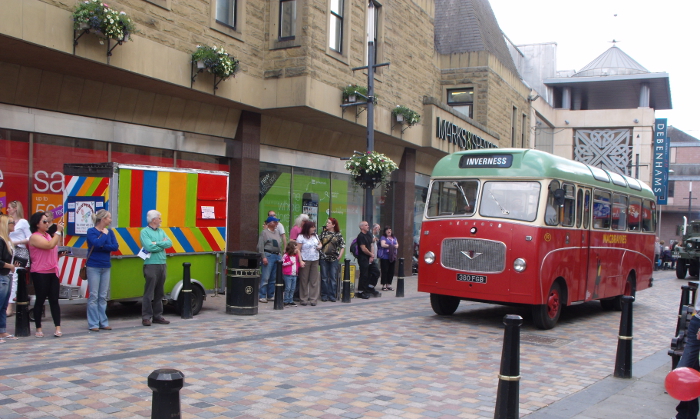 It just so happened that Cli Ghàidhlig were holding a coffee morning last Saturday, so Himself and I decided that we would go over to Inverness to do a biggish shop and get some wood for a project which Chris has in mind, thus giving me the opportunity to go to the coffee morning. I then heard that it was also Armed Forces Day from DJ MacIntyre – the director of Cli – who couldn’t be there for coffee as he was piping for the parade being as he is, an ex-soldier. So it just seemed like the perfect opportunity to go across the Dirigh and kill several birds with one stone! I didn’t really know what to expect on the day – we hardly ever go to Inverness on a Saturday as it is normally far too busy on that day of the week; I had never witnessed anything to do with Armed Forces Day and I had never been to a coffee morning held in the Spectrum Centre. “Nihil desperandum” quoth I and we were up and on the road by 8 o’clock, anticipating that there might be quite a bit of traffic with people on their way home after spending a holiday here.

Well, there wasn’t too much traffic and it was just 9.40 when Chris dropped me off outside the Spectrum Centre – which is situated in the square behind the railway station which serves as the bus station for Inverness. The Centre looks a rather shabby place on the outside, so I was very pleasantly surprised when I went in as it is far from shabby inside – it has obviously been renovated recently into a smart new facility. I gather it houses a theatre and a café, where I was directed to go by the woman on the door. As I couldn’t wait the 20 minutes for the official start before getting a caffeine fix, I wended my way up to the counter and I have to say that I was really impressed with the baking which was on offer there, and especially the range of gluten-free cakes. There was a date and walnut loaf, a Swiss roll type thing and pancakes – which is what I took as I need to be gluten-free nowadays. The pancakes were wrapped up as a unit of three, and I ate one and brought the rest home with me, and really very good they were too. 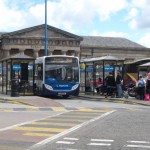 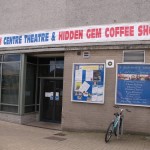 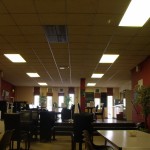 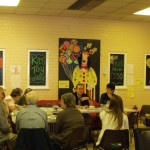 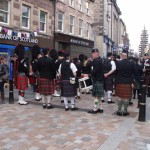 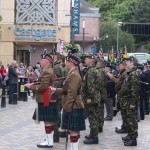 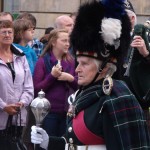 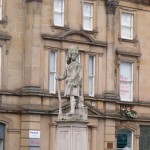 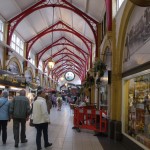 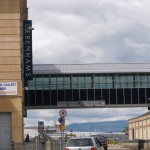 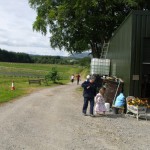 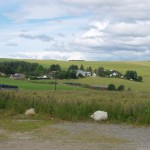 I had just finished devouring my pancake when Robyn from Cli arrived, followed soon after by others – in the end there must have been between 15 and 20 people there. I recognised one of the early arrivals as being Rebecca who I had met years ago when she came to a Gaelic day in Ullapool with her small son. I had met them again that same year at a course on the Moray coast – I thought it had been in Elgin, but I remembered on the way home that it was actually in Nairn – two very distinct places, but to me all “over there”! Rebecca and I fell to chatting and it turns out that her “wee boy” is now 15!! How time flies… We were joined at our end of the table by Brenda who I had met at a few weeks ago in Ullapool on the course with Alec Valtos, and we happily spent the next hour or so chatting together and with our neighbours –in Gaelic – there was very little English around our tables as everyone was taking the opportunity to practise! The people there were at all levels of Gaelic knowledge – from a couple from Stornoway who were of course Native Speakers who regularly use their language and two women who were Native Speakers but who live in Inverness and rarely get the chance to speak Gaelic now, to learners like me at various stages of learning. The next couple of hours went very quickly and I certainly enjoyed the whole thing. It was great to have the opportunity to renew old acquaintances and meet some new folk, all with the same love of the Gaelic language in common.

As the “witching hour” of 12 midday arrived, people started to disperse and so I gathered up my bits and headed over towards Girvan’s, where I was due to meet Chris for lunch. Girvan’s restaurant is situated at the top of the High Street, and I walked up Academy Street and through one of the passages which lead up to the High Street, only to find myself right slap bang in the middle of the Armed Forces Day parade!! I was so pleased to find that my timing had been accidentally so perfect – well maybe not as perfect as it could have been as I found myself unable to get a good vantage point for taking pictures The line up seemed to consist of a pipe band (of course), Veterans, some regular soldiers, sailors and policemen with a few veteran vehicles bringing up the rear. A few minutes after I had arrived and was desperately trying to get some pics, the parade was brought to attention, the pipes struck up with “Scotland the Brave” and the whole kit and caboodle moved off – kilts swinging, standards flying and all looking mightily impressive and uplifting to the soul.

It was certainly time for lunch now, but Girvan’s was only a step away and Chris was waiting for me inside. We were remarking on how quiet the city seemed to be for a Saturday, but it just so happened that the Inverness Highland Games Day was also taking place on this particular Saturday – a busy day in the local calendar for sure!

After an excellent lunch and on my part, a restorative espresso, we did what was left of the messages – Chris had done what to me was the boring bit i.e. the supermarket and the hardware store, which left only the fun bit – the Polish grocers, the Victorian Market and the Garden Centre! The Polish shop is a great place – it serves the local Polish community and very little that pertains to English goes on in there – but the cool cabinet contains some wonderful Polish sausage and meats; they have a great selection of pickled herring of various sorts and it is all incredibly cheap!! I love going in there…

The Victoria Market is genuinely Victorian and has been kept largely as it was originally. We go in there mostly for the Oriental grocers which is owned and run by a Polish lass who loves cooking and food, especially Chinese cuisine. She and I usually have a good chat about the sad state of British eating habits, while Chris browses the shelves for the things we need.

After the Garden Centre, there was only one more stop to make on the way home, and one which is only possible at this time of year – and that was to the Tollie Croft pick-your-own establishment, which is a few miles out-with Inverness on our road home and run by Robert and Edna Campbell. We have been going there for some years now, and Edna still remembers the day when Chris was trying to put a big tray of raspberries into the car, and she watched in horror as they all slid off the roof!! She is a great lady – working as a Dinner Lady in term time while her husband tends the fruit bushes, and then in the school summer holidays she is up at the croft seeing to their customers’ needs! Between times, she finds time to make really good jams and jellies and we bought a pot of her excellent redcurrant jelly which goes so well with lamb. When our boys were growing up, we used to bottle loads of fruit – always ready-picked I hasten to add as our normal order at the farm near Peterborough where we went was for 40 lbs of raspberries alone! We also bottled peaches and blackcurrants – but now there is only us and so we bought but five pounds of fruit to eat fresh or freeze, which will eventually become ice cream or sorbet. The fruit at Tollie Croft is always of the best – I don’t know how they do it, especially considering the climate – but this year the strawberries were unbelievably good – huge, juicy and so very tasty! I have already turned a few into ice cream You just could not find such fantastic produce in any supermarket – thank Goodness for people like the Campbells that bring so much pleasure to the taste buds and health to our bodies…