Christmas is coming apace now – on Monday of this week, the Dance Club had its Christmas Party with the dancers from Ullapool coming to join us, as has become the custom in the last few years. The Village Hall was full – there was plenty of food, and Anthony had brewed some excellent mulled wine to warm the cockles on a very chilly evening. I am certainly sure that a good time was had by all. 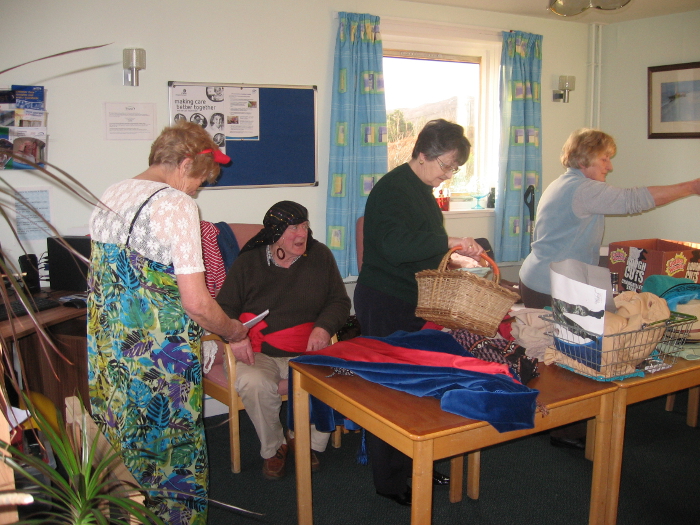 But the main event of this run-up to Christmas has to be the Pantomime! Our last and full Dress Rehearsal took place on Monday afternoon – postponed from last week due to the snow – and it all seemed to go very well, and all was now ready for the performance on Tuesday afternoon. This panto was conceived by Lyn and Gwen just as a bit of Christmas fun for the older folk who attend the lunch club at the Assynt Centre. Although it is only supposed to be a “bit of fun”, many people have put a lot of time and effort into its creation – although no one involved has complained in the least that they have had too much to do, all are saying how much they have enjoyed the whole thing. Dawn, who is one of the artists who paints the china for Lochinver Pottery, has painted several superb backdrops for the various scenes, and also a “family portrait” to hang in the “castle”. She was telling me that she had intended to paint small glasses on this ugly visage, but had forgotten them at the last minute which she rather regrets – I told her that the painting was wholly complete without – which it is! I hasten to add that this “ancestor” in no way looks like Morag who plays the Wicked Queen 🙂 Ken has worked his magic on windows, fire places, trees for the woods and the frame from which to hang the backdrops, and someone has spent time and effort putting the music for the songs onto a disk. As for the costumes – well, I think that has been a group effort. Dawn plays Horace the Huntsman in a rather superb “muscle-man” jacket which she got from ebay, Queen Morag has some amazing mauve hair, the dwarves all have pointed Christmas hats and fake spectacles of various sorts seem to abound. There is a profusion of props as well – swords, bow and arrows and even woolly grenades – Horace the Huntsman is well-armed 🙂 I came in late to this, having been roped in to play the Spirit of the Mirror – for which I have a white loose tunic made from a net curtain and ingenious white headgear, and of course white face paint. I’ve only been to three rehearsals as I don’t have a big part, but I’ve really enjoyed them! 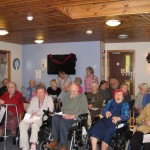 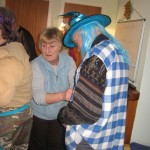 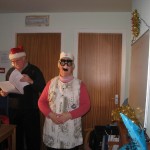 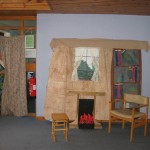 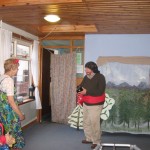 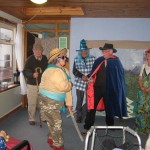 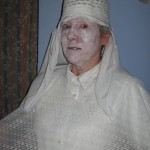 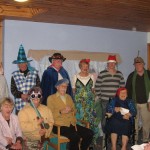 I doubt not that everyone will have guessed by now the theme of the play – yes, that’s right – Snow White and the Seven Dwarves. Only of course the action takes place in the beautiful land of Assynt – at the Castle of Ardvrek, in the Culag Woods and in a crofter’s cottage. Naturally, we don’t have a full compliment of dwarves – there wouldn’t be room on the “stage” – and there are no “Young Leads” – a couple of the performers will be acting and singing from chairs! There are no “trouser roles” either – the part of Prince Charming, traditionally played by a woman, is taken in dashing style by the present chairman of the Community Council, Roddy Kerr, who brings a certain humour to the part. (He also plays one of the dwarves!) Angus is a fluent Russian speaker and uses a superb Russian accent in his role as the fortune-teller. What a talented bunch we are…:-)

Gwen had what I thought was a rather good and novel idea for the ending, and that was that when Prince Charming asks Snow White to marry her, she refuses on the grounds that she is an independent woman and wants to go off and run her own business growing cabbages – or some such – so the Prince asks Horace and he says “yes” thus allowing us to finish with the song “I’m Getting Married in the Morning” from My Fair Lady, which is our final big number. However, Gwen thought better of it and we were forbidden even to mention the idea – I think she didn’t want to upset some of the very much older or more conservative people in the audience!! So we have gone for the conventional ending, but it would have been different – very 21st century – and I doubt very much that anyone in the audience would have been shocked – more likely just amused!

The really remarkable thing about all this is the interest it has generated throughout the area! It has in no way been advertised – it was after all only designed to be a bit of entertainment for the members of the lunch club – but word has got around and loads of people have expressed the desire to come and see it! Amanda, who is the manager at the Assynt Centre, told us at the rehearsal on Monday that someone she knows from Drumbeg who has never once before even mentioned the Assynt Centre, asked her when the panto was to be! Several of my friends have said they were looking forward to it, but unfortunately there is a problem not only of space in the Centre itself but also of the Health and Safety regulations! Amanda had to resort to issuing tickets to keep numbers down to the 31 people the space will take – and that is with standing room!! The suggestion is now that there will be further performances in the New Year – which is after all the traditional Pantomime season and will give us all something to look forward to after Christmas. I for one hope it happens. It is a wonderful thing that Pantomime not only still survives as a genre, but seems to be as popular as ever – if not more so!

The performance itself went brilliantly 🙂 We played to a packed house, and the audience was great and certainly had a good laugh. The ad-libbing that went on – which was called for in the concept – made the whole thing fresh and funny. The cast enjoyed themselves as much if not more than the audience, and I feel privileged to have been able to be part of it.

Tea, coffee, cakes, mince pies and shortbread were handed round afterwards along with more mulled wine – there was a definite party atmosphere about the place as the cast mingled with the audience, sitting chatting and enjoying the refreshments. My full marks go to Katie “The Manse”, who at the age of over 90, sat through all the rehearsals giving her (very) honest opinion on progress, but was still there for the performance! As the party broke up, it was off home for all just as dusk was beginning to turn to night at about 4 o’clock. It was a beautiful, crisp, frosty evening and the sea was like glass – probably smoother than our prop-mirror! What a glorious end to the day it was…

This entry was posted in Social events and tagged Christmas pantomine. Bookmark the permalink.