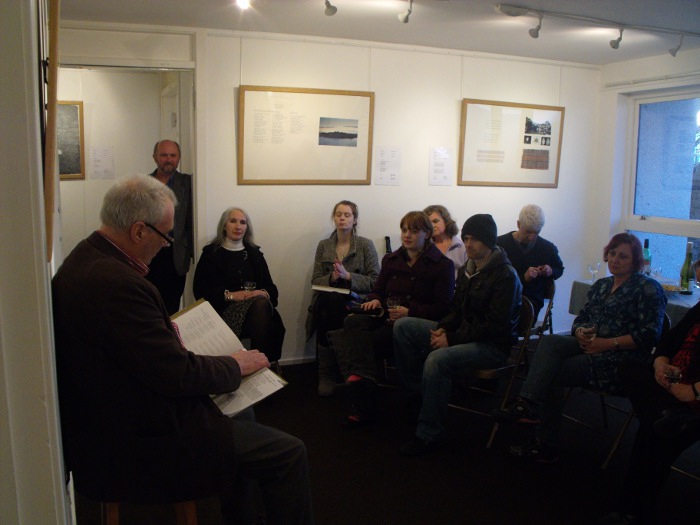 It was a beautiful evening when I met Maureen at our normal meeting place – the “industrial” bit of Lochinver locally known as “The Glac” – to stravaig down to Ullapool to sing with the choir at the opening of an exhibition in An Talla Solais (The Hall of Light). It would seem impossible to get mislaid in as small a place as Ullapool, but Maureen and I managed it and so unfortunately missed the start of the opening ceremony, and naturally, I had failed to bring a pad and pencil with me to take notes! However, before being hauled off to practice with the choir to warm up our voices, I did manage to hear most of the speech given by Malcolm MacLean, the editor of An Leabhar Mòr Ghàidhlig (the Big Book of Gaelic). 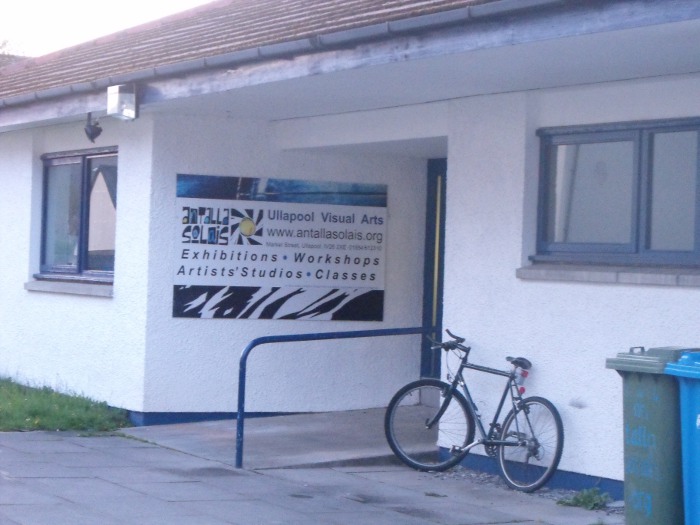 I have known about this book for some time, and have oft been tempted to buy it, but having learned what I did at this event, I shall certainly be putting it on my Christmas list! It is actually quite an extraordinary endeavour… I don’t know exactly who came up with the idea to do this, but according to the bumph, the idea originated at Pròiseact nan Ealan – the Gaelic Arts Agency based in Stornoway on the Isle of Lewis. I also couldn’t glean which came first, the book or the exhibition; although I think it was probably the exhibition. Both book and exhibition represent an anthology of Gaelic verse, in Irish and Scots Gaelic (with English translation) ranging from some of the earliest Gaelic poetry known, which was written in the 6th century, right through to the present day. It covers all the usual topics written about in verse running through comedy and tragedy, love and death, the spiritual and the bawdy (older Gaelic verse can be very explicit!!) The big difference between normal anthologies and this one is that the book also includes artworks from such people as Will MacLean, Alan Davies, Frances Walker, John Byrne, Rita Duffy and Alasdair MacLennan, none of whom I have to admit I have ever heard – but then I am not a follower of contemporary art, but I gather they are all well-known in their field. I have however heard of some of the poets – especially as they include Sorley MacLean! A hundred artists were picked for this project – fifty from Scotland and fifty from Ireland – and their remit was to produce pictures not so much to “accompany” the poems as more to reflect the feeling they brought out in them – I gather that each artist was given one poem. A small team of calligraphers lead by one Frances Breen was also involved in the creation of the exhibition. There can be no doubt that it is visually stunning – as is the book for that matter, well worth putting in someone’s Christmas stocking when the time comes around again.

In the part of the speech given by Malcolm MacLean which I heard before having to depart to practice, he was talking about the very close relationship that exists between Irish and Scots Gaelic – which were after all one language back in the Dark Ages when the Irish first crossed the Irish Sea to settle in the west coast of Scotland. He said that of the 20,000-odd words in both Scots and Irish Gaelic (Gaelige), only 365 are different, and that basically the real differences between the two languages are more to do with pronunciation. I have an Irish friend, Kevin, who speaks Gaelige fluently and is learning Scots Gaelic, and to him the Scots version sounds like an old-fashioned version of the Irish! So what Mr MacLean was saying was very interesting to me – and it was at this point that I wished I had remembered to bring pen and paper so that I could write such things down!

He was also telling us about the remarkable journey the exhibition has had. It has been shown around the UK, in Ireland, France, Australia, Canada and most recently opened the Tartan Day 2012 celebrations on Ellis Island in New York! It is now back home in Scotland, and in Ullapool they are showing 25 of the artworks in three places – the Cèilidh Place, The MacPhail Centre and An Talla Solais. The artworks are quite big, which is why the exhibition had to be split up as Ullapool doesn’t have a huge great gallery to take 25 large pieces. 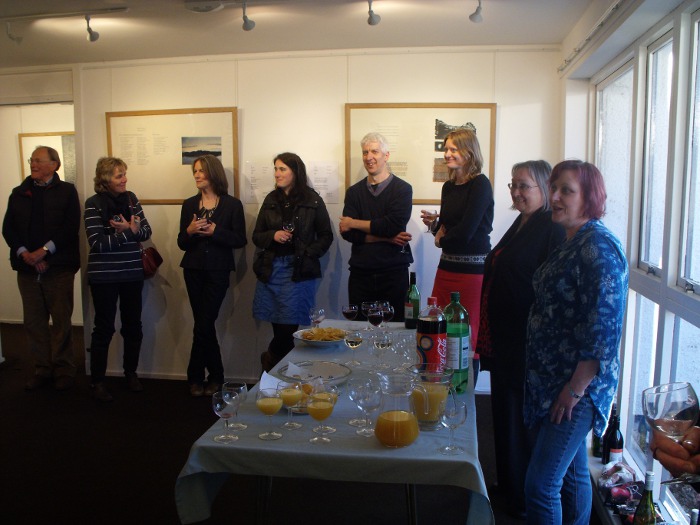 When we returned from our practice, Maoilios Caimbeul was reading an old, old poem from the book, in both Gaelic and English. I stood for a while listening to the words quite entranced … The choir were given something to drink, which was very welcome as my throat was really quite dry by this time! We were the only musical entertainment for this evening – so no pressure! – but 14 of us had turned out, and in a small-ish room with a fairly low ceiling, we made quite a grand sound! We sang three of our favourite songs – Sìne Bhàn, Hughaibh air Nighean Donn and to finish with a flourish, a port-à-beul – A Mhic Iain Bhàn & Cha Tèid Fionnlagh – two songs but which go together giving a strathspey and a reel.

After singing, we spent a wee while just chatting and looking at the exhibition, but as Maoilios was preparing to read some more poetry, Maureen said that she really had to get going – her journey is 15 minutes longer than mine, and so it takes a full hour for her to get between Ullapool and Clash Mòr where she lives.

The journey home was as lovely as the journey down had been. It was about 9.00 pm when we left and was definitely dusk-ish. It wasn’t the easiest of drives as there were quite a lot of deer next to and sometimes on the road. A red deer is a fairly big animal – maybe not as big as an elk but if you hit one, it can do a fair bit of damage to the car – and it doesn’t do the deer much good either! Most of the animals we saw were stags, some still wearing their antlers although the time to shed them is pretty much passed now. The reason why there were so many on the road on that occasion was probably because there was a reasonable covering of snow on the tops. Buachaille Bàn (boo-a-qula baan being roughly how the words sound) means the “white herdsman” and are the Gaelic words to describe the snow which lies on the mountain tops and which drives the animals down to the lower regions. It is also true to say that the grass that grows on the verges is reputed to be the most succulent, and the road provides the deer with much needed salt! But personally I prefer the older, less prosaic version of the explanation… 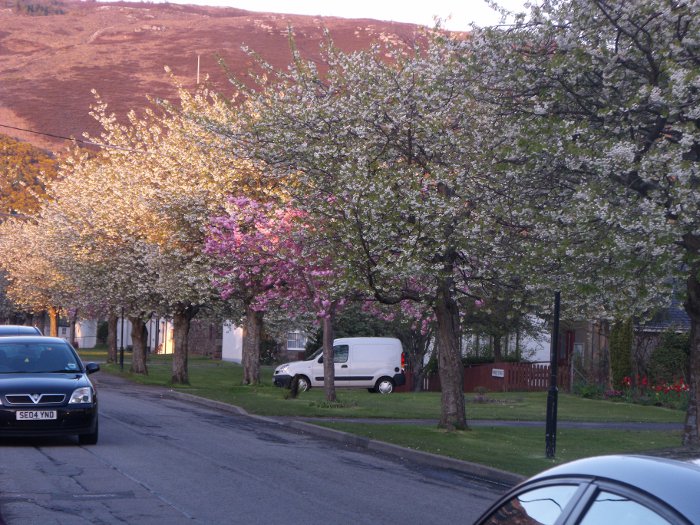 This entry was posted in Local area and tagged Gaelic. Bookmark the permalink.