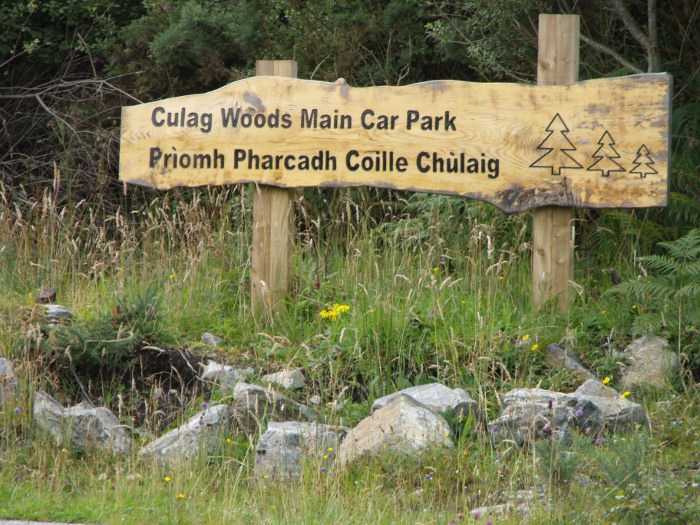 As I was saying in my blog post last but one, I was on the Isle of Lewis for a week taking what was basically a course in learning Scots Gaelic. Well, I really thought I should not let that blog go too far down the line before writing a bit of an acknowledgement and saying a public word of thanks to Còmhlan Gàidhlig Asainte.

As the name implies, this group is in the business of promoting Gaelic in our area and the hope is that slowly but surely, we will see a lot more Gaelic spoken here – maybe in the way it was but 40 years ago! In the 1891 census, Sutherland recorded more Gaelic speakers than anywhere else and although that obviously included the east coast of what is a very big county, it is a good indication that Gaelic was alive and well here on the west coast as well. More recently though it very much has been in decline and that is where Còmhlan Gàidhlig Asainte hopes to make a difference.

During the winter of 2008/09, they held a series of events designed to raise the awareness of Gaelic. I was a member of the committee at the time, and although I very much enjoyed the work and the events, it was a rather packed programme which meant rather a lot of work for us volunteers! Generally speaking, the events did not, on the face of it, attract many people, but on thinking about it, I realised that the fact that we held these events in all three of the main centres in Assynt – i.e. Lochinver, Stoer and Drumbeg – they did reach quite a few people. The exception on the turnout front was a Treasure Hunt we organised for children on the Little Assynt All-abilities Path which was very well attended – something which gives one great hope for the future of the language!

Perhaps one of the good outcomes of this work is the appearance of a lot of new Gàidhlig signs such as the one at the top of this blog.

Now in these straightened times, the push of all such groups supporting Gaelic has to be for education and Còmhlan Gàidhlig Asainte, under the stewardship of Grahame Perrie, did us proud this year with funds actually specifically designed to help us learners to go on courses. In return, we have all promised to give back to the community by offering our services to help others interested in learning or supporting the language – a win-win situation if ever there was one!!

So many thanks are due to the hard-working committee of Còmhlan Gàidhlig Asainte for their efforts and for giving us the opportunities by which we have so much profited.

Of course, CGA is far from being the only hard-working committee in Assynt – as in many small communities, there are many such organisations. There is the Community Council looking after our interests with the Highland Council and other such bodies – my Old Man was secretary of our Community Council for 5 years and I know what a power of work they sometimes have to do! There is also the Assynt Foundation, which manages the land we now own as a community – 44,000 acres of it! It is a huge responsibility looking after such an area of land for the benefit of not only us as a community now, but for future generations.

All three Village Halls have committees running events and generally working to care for the halls, which again is something not only very important for the communities that are using them now but also to make sure they remain for future generations to use and enjoy.

One of the very active groups here just now is the Assynt Historical Society who not only work to discover and make known to the wider public the history of the area – archaeological as well as more recent history – but also look after the historical buildings locally, such as the Broch at Clachtoll and the Kirk at Inchnadamph. If it wasn’t for the efforts of Historical Assynt, the Kirk would probably still be in a state of disrepair instead of being not only an excellent little museum but also a venue for concerts for the people of the area.

There are of course all sorts of committees which work hard to raise money for charities such as the Highland Hospice and Macmillan Nurses – all of whom organise sales of work and such things in the village halls and are legendary for their baking!

There are the people who work to keep the Assynt Centre running for the benefit of the older folk, which is a very essential service as without the Assynt Centre there would be no-where for the older members of the community to get together. This group runs a bus for the benefit of the older people which not only brings them together, but also gives them a chance to shop and go to the bank or post office in Lochinver, a service which in a place where the townships are separated by not only miles but very twisty, narrow, steep roads would be greatly missed, and which nowadays is entirely manned by volunteers – as is our Fire Engine which we also certainly would not want to be without!!

Then there is the WI of course and also groups such as the Drumbeg Gardening Club – not to mention the Field Club the committee of which I am a member, The Games committee and a recently formed committee to do with our Deep Sea Fisherman’s Mission – but more of that particular committee another time.

In fact there are probably too many organisations of this ilk round here to list them all – I’m not even sure that I know them all!

There is a group locally who looks after the Culag Wood which is a community owned wood, and we own Little Assynt along with it. The Culag Wood is a wonderful, magical place to be and the committee work hard to provide all sorts of facilities such as the one pictured here, which is a picnic area for the pre-school group where the very young children can experience the goings on in a wood of this nature. There is also a lovely rustic play park complete with tee-pee, which was created by the hands of Ken Fairchild, who also built the furniture for the picnic area – a very skilled man if ever there was one!

There are educational boards all over the wood giving invaluable information such as how many insects there are in a given area of ground! I say that – it is important for people to know such things in an age when we are getting more and more removed from nature. 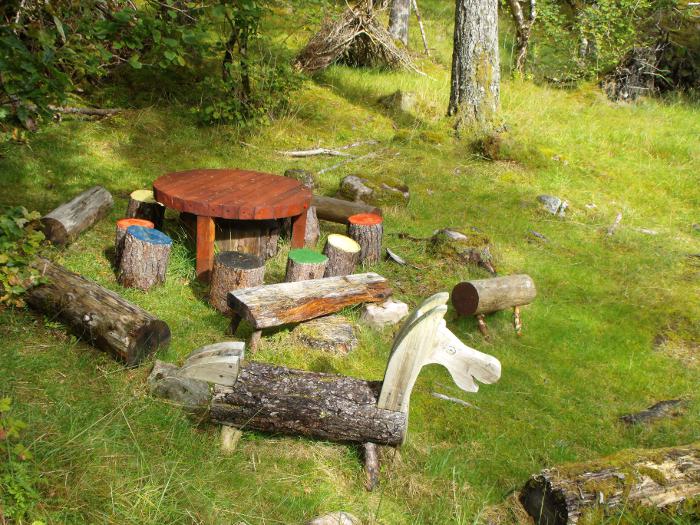 One of the paths through the woods takes you up to a view point where you can see right over Lochinver and its bay, and another which takes you down to the White Shore where the wood meets the sea. There are picnic tables and places just to sit and contemplate nature all over the wood which were made by Charlie Russell – a local craftsman who earns his living with wood, both making such things and also providing firewood for us who are too busy (or too lazy!) to attend the “woody days” in the wood, when people can collect wood for their fires and thereby help with the management of the wood itself. Charlie is the one who has made all the Gaelic signs locally, and a lot of the houses now sport signs made by him – including ours! All of which goes to support the local area in all sorts of ways.

As you can see from the above, ours is a very busy community – but one where you can do as much or as little as you want… 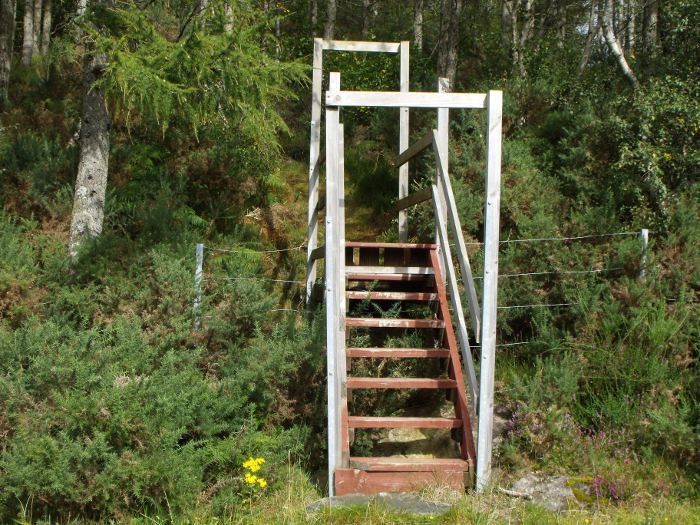