Of midgies and Gaelic 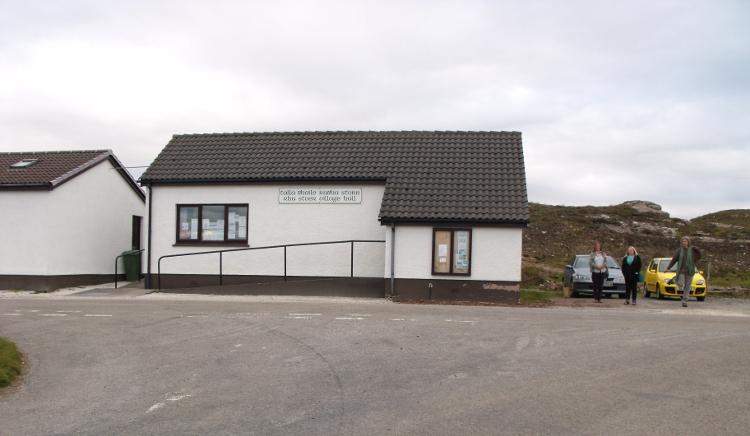 I have to admit that August is my least favourite month of the year and I think many folk would agree with me. It is frequently close and heavy, and we seem to have lost the warm, fresh, sunny days which we can experience in June and July. It isn’t quite so bad here as it used to be in Lincolnshire – for one thing the weather is never as hot, 24 being about the most we enjoy up here (and I for one am thankful for that!) – but sometimes the days can feel quite muggy and we look at the sky in the hope of a thunderstorm to clear the air.

The other thing about August is that the biting insects all seem to start to panic that they haven’t done enough to procreate, and so they re-new their efforts to collect blood, and so lay more eggs, with increased vigour! Mosquito nets start making their appearance more frequently around the beginning of August, and campers are sometimes driven off the fields and into the B&Bs to get relief!

Evenings can be the worst time for the midgies, especially if those evenings are close, cloudy and still, which they not infrequently are at this time of year. That sort of evening, when maybe one would want to be out for a walk or in the garden, gives just perfect conditions for the midge, and they make the most of it! The sensible person stays indoors – evidently being inside doesn’t suit midgies and they die pretty quickly – although not always before they have made folks pretty uncomfortable…

As happened the other day! 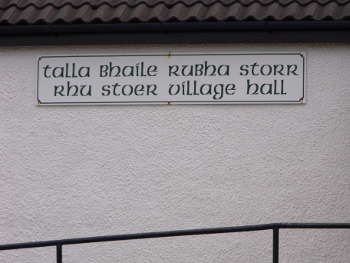 Although most things set up with the entertainment of the local community in mind tend to happen in the winter, there are also events during the summer and recently a Gaelic poetry reading evening was held in Stoer Village Hall. This was the first time such a thing has been held here, certainly in recent years, and Mandy Haggith, who organised the event, was sincerely worried that few people would turn up for it – especially as there was a sale on in Lochinver Village Hall at the same time. Not so much bad planning by Mandy, as it is a fact that it is very difficult at any time of year to find a date which doesn’t clash with something! However, Mandy needn’t have worried as 12 and a half people turned up at the hall – the half being the young son of Grahame, who is very involved with the Gaelic in this area.

Most of us had brought either poems or songs with us. There is a much more fuzzy line between poetry and song in Gaelic than in English. In the English world, there is quite a sharp line drawn between the two, but in Gaelic the word “òran”, which is usually used for “song”, also means “poem”. So an “executive decision” had been taken that both would be appropriate for this evening. I had taken along my copy of “Can Gun Robh” which is a collection of poems principally aimed at children but suitable for all I reckon, put together by Ann Lorne Gilles – a name well-known in the Gaelic world. I had ear-marked a couple of poems in the book, but really had no idea what format the evening would take…

As often happens in small communities where all those sitting informally round a table know each other pretty well, the evening just unrolled in a completely organic fashion. Poems were read, songs were sung and drinks were drunk – non-alcoholic as most of us were driving! The evening was voted a complete success and more such events have been planned for the future.

The interest in Gaelic is pretty high in this area just now. There must be about 20 people learning – thanks in most part to the popularity of a language delivery system called Ùlpan. This is a system which originates in Israel as a method to teach people to speak the basics of whatever language as quickly as possible. The first language to be taught this way was of course Hebrew, but quite a few normally minority languages such as Gaelic and Welsh in this country have adopted the method to get people up and running. Round here another similar system called Gaelic-in-the-Home has been tried quite successfully, but the difference between the two methods is that Ùlpan not only allows the students to take the language onboard aurally, you also learn to read and write it. There is no formal grammar taught – one learns the grammar by default, so to speak, as a young child would and the jury is out on just how effective that principle will be in the long run when used on adults. For one thing, it takes approximately 1,900 hours for a young child to absorb its native tongue – and Ùlpan is only about 200 hours worth of lessons! However, very few people don’t thoroughly enjoy learning this way, and it has brought a real boost to the future of Gaelic as more and more people take up the opportunity to learn via this method.

For those few who can’t cope with the way Ùlpan delivers the language, there is always the slower, more old-fashioned method. Older people especially often seem to prefer learning via the “grammar route”, and there are courses going on all the time in various places – for instance Sabhal Mòr Ostaig, the purpose-created Gaelic college on Skye, offers both the Ùlpan method and grammar-led classes, and they are both very popular. Round here, though, there is only little ole me tutoring a grammar-based group – I have a group of five (four during the summer when Julie’s time is taken up with running her B&B business) and we happily potter along with a mix of conversation and more formal learning. Two of our number are also going to Ùlpan classes and they are finding the combination of the two methods very efficacious. We all enjoy our weekly meetings and I certainly get a lot out of them! I totally enjoy passing on what I know of a language I truly love.

We are a peripatetic group, meeting as we do in each others’ houses and the host/hostess provides the coffee. Our wee group is completely open-ended and one day I am looking forward to it becoming just a chance to keep practising the language – although of course there is always something to learn!

So, at the end of the day, when all 20 learners acquire a certain level of fluency, it will mean at least 2% of the population of Assynt has a working knowledge of Gaelic. I say “at least” because my calculations don’t include those among the older members of the population who still have some Gaelic from their youth, nor does it include those of the children who are learning at school. Unfortunately, just now there is no provision for Gaelic in either of the Assynt schools – we are working on changing that! – but the children can take Gaelic at the senior school in Ullapool when they move on from our primary schools. Most of the children seem to take up Gaelic at some point in their school careers – which makes sense as there are interesting jobs to be had for Gaelic speakers in Scotland just now, what with our own Gaelic radio and television channels and all the various festivals etc., never mind careers in education…

There is also quite a bit of Gaelic going on in Ullapool going south and in Scourie going north, which is all very encouraging for the future of Gaelic in what was once very much a Gaelic-speaking area. But more about Gaelic in later posts and as promised, there will soon be a Gaelic section on this particular blog site.