A bit about Lochinver and its community 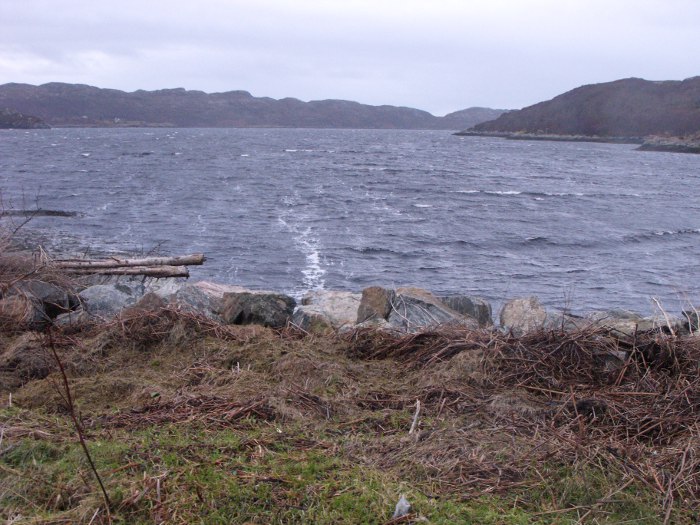 The evening of the third Thursday in January is always the Field Club’s Annual General Meeting. Strangely enough, this is always very well attended – AGMs are mostly meetings that people avoid if they can – but not the Field Club’s! The reason for this is that the business end is kept as short as is possible, and it is followed by cheese and wine and a quiz which is devised by our very own quiz person – Lyn Fairchild. This quiz, of course, has its basis in natural philosophy, is never too hard or technical, but at the same time can be quite a brain teaser and is always great fun. We all participate with gusto and there is a real party atmosphere. In fact last year the Assynt Foundation tried to hold their AGM on the same evening – very silly! – everyone wanted to come to ours and the Foundation people had to postpone as they couldn’t even raise a quorum!

What I can never understand about such events, and in fact nearly all the events in the village, is that so few people from Lochinver come along – they don’t know what they’re missing! The majority of the people who attend the events held in our Village Hall or the other venues in Lochinver come from outwith the village – from townships such as Clachtoll, Stoer and Elphin. I have to say that most come from Stoer, Clachtoll or Nedd – places like Drumbeg are a long way up a very winding single-track road for most people to attempt on a dark winter’s evening; and only one or two come up from Elphin, which although technically in Assynt, is geographically nearer Ullapool. But if people can come from far afield to events in Lochinver – why not from Lochinver itself?

My feeling is that this phenomenon has a lot to do with population dynamic. Lochinver has the largest population in Assynt and also has the most families with younger children. There are young families elsewhere in the parish – Stoer has a primary school, not very big I grant you, but big enough to show that there are young families living up there. It’s hard for people with young children to get out to these events, and also they are very busy with work and just getting on with life – the younger folk from further north tend not to come to these events either. It is also true that if your friends and neighbours of your own age group aren’t going to be at these events, then why go?

You hear a lot from people living in villages about trying to attract young people in – but I have always been of the opinion that the core of life in any village tends to be the “retirees”! These are the people often with enough money (although not always of course!), but more importantly with the time and energy to run events, fund raise for village projects or charities and generally give of their time and themselves for the good of the community at large. In the fullness of time, they get old and die and there is a new batch of retirees to take their place! Yes, I do think that it is important to have young families in any given area, but I also think it is a long way off being the be-all and end-all of the story of village life wherever that may be! Naturally, it is the younger folk who do the work around here – in the restaurants that I was writing about two blogs ago, in the shops and hotels, the fish farms and running the creel boats, and it is nice to be able to say in this day and age that these jobs are taken by local people. I have nothing against the people who come to the UK to work from other countries – far from it – but it is also true that keeping the younger folk here by providing employment for them one way or another is important in a community such as this, and provides a sort of historical continuity. It gives the youngsters who were brought up here a chance to stay and bring up their own families here if they want. Of course, it isn’t the whole story on the employment front – there would always be room for more job opportunities! 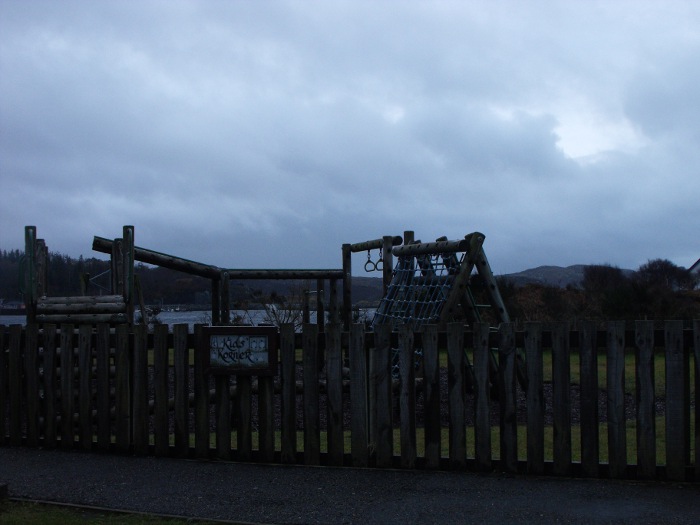 So, as you might see, Lochinver has quite a few young families. There are a few living in Culag Gardens around the back of the hotel of the same name, and one or two in the older part of Lochinver which runs along the top of the bay, but the majority live in Inver Park on the other side of the water. There you can find children playing and cycling round the roads in perfect safety – not a frequently seen sight elsewhere nowadays! There is an adventure playground and a tarmacadamed pitch for playing basketball or football. 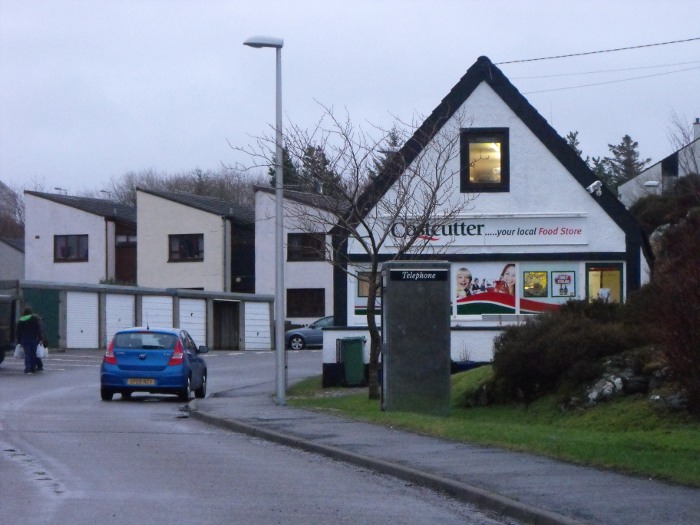 For the most part, the houses in Inver Park were originally built as part of a Council estate, although now most of the houses are owned by their occupiers. Part of the estate was, so rumour has it, built on a bog and although it isn’t normally known in itself as “The Bog”, the small Costcutter store there is always affectionately known as “The Bog Shop”. It serves the homes in Inver Park of course, but we all go there – I have even seen the fishermen off the boats in there buying their “extras”. The Bog Shop is open more often than the Spa shop which is on the front on the other side of the bay – it is always open for a few hours on a Sunday morning and is even open on Christmas Day when their main trade is in batteries for Christmas presents! 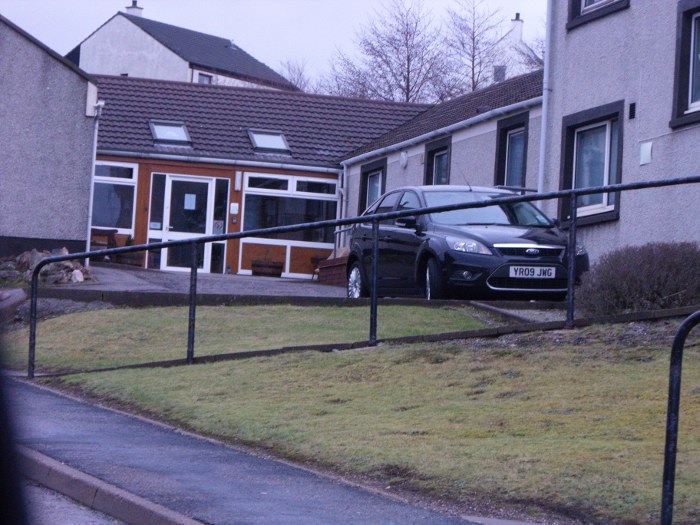 You turn left and left again to get to the Bog Shop, and going on down that road takes you to the Assynt Centre which is for the older members of the population of Assynt. It used to have a few beds mostly for respite care, but a few years ago, when my husband was secretary to the Community Council, it was threatened with closure – familiar story! The community fought tooth and nail to keep the facility there including the beds and the emergency cover for the sheltered housing in Kirk Road which runs down the hill from the Centre. That time it sort of worked – we kept the beds but lost the sheltered housing facility – but unfortunately that wasn’t the end of the story and two or so years ago, the Assynt Centre was under threat again. This time they cited the old-fashioned design of the place – it was built sometime during the second half of the last century – and declared it not fit for purpose.

The upshot of that is that the Centre is still open, but the beds have gone and it is largely run by volunteers – again mostly comprising the middle-aged retirees I mentioned above!! It forms an important part of the community round here – without it a good few of the older folk would be trapped in their homes. The Centre runs a bus which has a facility to carry wheel chairs, and picks people up from all around the parish and brings them into Lochinver – to the shops, post office and bank, and also to the Centre where there is a lunch club, and every Tuesday an event of some sort is organised by the above mentioned Lyn. I once went to demonstrate spinning on a Tuesday and had a great afternoon! It is a warm, happy place – long may it last, after all I will quite likely need it one day!

If you drive on down Kirk Road, you come to the playground and a small square of houses to the right with the bay ahead of you. The road goes up in a sweep to the left where there is more housing and is where the Munch Box lives – see the picture in a previous post. So you can see that there is quite a density of population in Inver Park – by our standards anyway So, it’s turn around and back to the “main drag” which leads on down eventually to the famous Lochinver pottery – but that’s for another post… 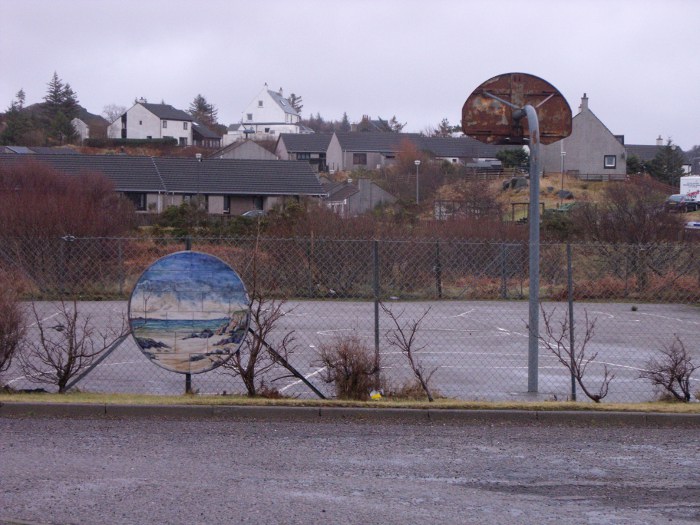 This entry was posted in Field Club, Local area and tagged community spaces. Bookmark the permalink.