I want to start this blog post by making a bit of a tribute to Alan Macrae, who departed this life on Monday of this week in rather difficult circumstances. It has been a dreadful shock to everyone. Alan was a crofter at Torbreck and was chairman of the North Assynt Crofters’ Trust. In fact, he was instrumental with others, as I understand it, in the buyout of the Crofters’ Trust land, the first of its kind, which happened at the beginning of the 1990s. As I see it, with my rather jaundiced outlook on life, most buyouts of this nature nowadays have to do with windfarms and normally the perceived money to be made. But the buyout of the North Assynt Estate had to do entirely with the desire for the crofters to own in perpetuity the land they and their families work, thus safe-guarding it for the future. I didn’t know Alan personally, but I do know that he will be much missed in the community at large.

I will certainly miss his cows! Alan kept Highland and Highland crosses – those tough, hairy, gentle beasts which range in colour through blacks and browns to brindle and cream. His cows roam the common grazings and are not infrequently seen eating the rather tasty grass on the roadside verges, much in the same way as the sheep. Last Saturday evening was the last time I saw them, and although I had my camera with me, I decided not to stop for a picture at that moment – a decision I now regret as that may have been my last opportunity. 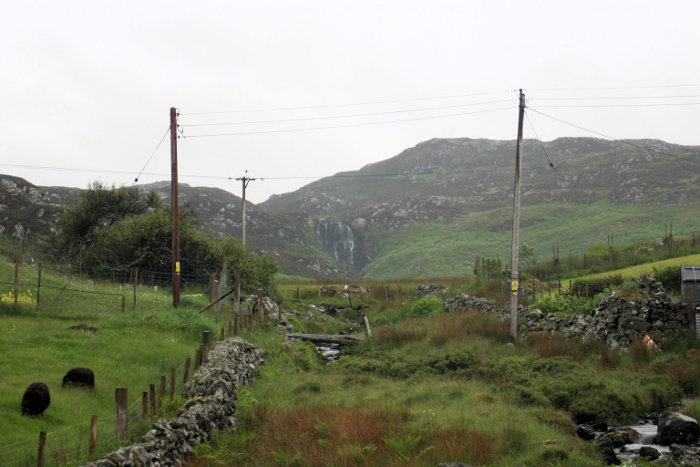 One of the reasons for not stopping was the fact that it was pouring with rain and had been for the entire day. But I had a Midsummer Party to go to at my friend, Andrea’s house in Clashnessie. When I first received the invitation a few weeks ago, I was sure that there would be loads of wonderful pictures to be had of the sun setting over the sea, and maybe if I had the energy to stay the course, rising again a couple of hours later. Well, maybe next year…

Being Midsummer, there were quite a few parties and bbqs happening, and also James Graham, the well-known Gaelic singer and Lochinver native, was singing with a couple of friends, who together form the group Cruinn, in the Village Hall. This was obviously going to be popular and I met not a few cars on the road all hurrying down to Lochinver. In spite of a rather stop/start journey, I still arrived a wee bit too early for the 8.00 start of the party, so took the opportunity to get some pictures in Clashnessie.

There is a notable falls there which gives the township its name – in Gaelic Clais an Easaidh. The word “clais” means a ditch or trench and “an easa(idh)” is the genitive of the word “eas” meaning a falls. Thus Clais an Easaidh means the ditch or trench of the falls, and when you stop on the wee bridge and look to the right, you can see the “ditch” in the landscape leading up to these rather stunning falls. Unfortunately until last weekend, it had been quite dry so my picture of the falls does not show it at its best! 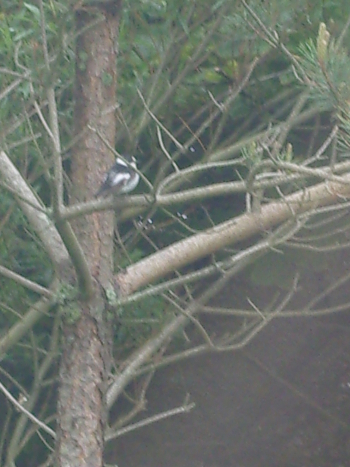 The beach at Clashnessie is not sand but fine shell, which is not so comfortable for doing the beach “thing” and certainly isn’t really suitable for building sandcastles. A game of cricket would be fine though, and I have seen folk on the beach doing just that. It is popular with seabirds, and a couple of years ago we had there a Franklin’s Gull which had been blown across the Atlantic from America – a very rare occurrence. Fortunately, or unfortunately whichever way you look at it, we are too far out for “twitchers” and so we tend to have to keep our rare sightings to ourselves – such as the Ringed Flycatcher seen recently lost in Assynt from central or eastern Europe, and never before seen in the Highlands.

As the hour approached, I turned round and off down the track by Vanessa’s egg box. I had never been down this road before, but found Nigel and Andrea’s house without trouble. They have a newly built wooden house of a type which is becoming more common round here. Not so long ago wood houses were inconceivable in the damp British climate, but I assume that advances in the preservation of wood has made them more viable. Nigel and Andrea’s house is not only made of wood, but is insulated with wool and one day, when it is no longer needed, it will disappear into the landscape rather than becoming a “picturesque ruin” like so many of the old blackhouses are now. All that will be left, I should think, would be the pipework for the under floor heating system – the rest will have bio-degraded away. It is an interesting and attractive house with a lovely big kitchen area, which is where the party had to be held in the end as it didn’t stop raining until 10.00!

I was not the first to arrive, Stewart and Monika Yeats with their wee boy were already there. Stewart’s first job was to remove a small tick from my arm, but then he was telling me about his new enterprise called Assynt Fly Fishing and which can be found at www.assyntflyfishing.com. He loves to fish, and has now set himself up taking other people out fly fishing. Not as a gillie – as he put it, he doesn’t carry the lunch! Although he will find good places on the rivers or lochs and teach people how to caste if need be, he will also give information about the wild flora and fauna; explain Gaelic place-names; relate the history of the area etc. “Holistic Fishing” was the name Himself put to it when I told him about Stewart’s new venture – and that sounds just about right. Stewart was saying that so far this has proved popular with people. Of course, there will always be a place for those who just want to go out and fish (and maybe have someone to carry the lunch!) There is plenty of room for both.

Round about 20 people were able to come to Andrea’s Midsummer Party and although it had to be held indoors, it didn’t dampen the spirits. The fruit cup served by Nigel might have helped in this:-) The food and company were excellent and I really enjoyed myself. 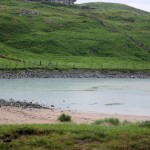 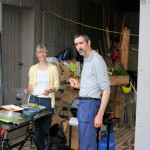 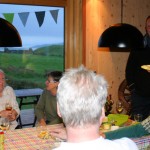 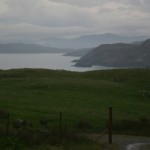 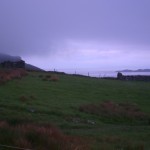 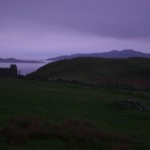 It was still light-ish, that famous simmer dim, when I left at about midnight and probably because of that I was still feeling wide awake. This was a good thing as there were a lot of frogs on the road – the rain had undoubtedly brought them out. I love frogs and so did my best to make sure that I didn’t squash any of them, which meant being on the qui vive all the way home. It was good to see them out and about minding their own business.

It was dry when I got home, but pouring again when I awoke on Sunday morning, and so it stayed for the entire day. 48 hours of pretty much solid rain – not what one hopes for at Midsummer! There is an excellent expression in Gaelic for this sort of rain – “bha tuil ann a chuireadh earbaill às na h-eich” which means “there was rain enough to knock the tails of horses”. Very apt methinks!

Apropos of the time of year, there was an amusing thing on the radio. Someone e:mailed in to say that if June 21st was the official start of summer and June 24th was Midsummer’s Day (which it is in the UK and was one of the Quarter Days when the rent was due in times gone by), then summer is only a week long! I have mentioned this to several people recently, and they have all agreed that this has to be true and in fact this year, we all feel that summer hasn’t even lasted a week…

This entry was posted in Local area, Social events and tagged midsummer. Bookmark the permalink.