Of gardens and weight-loss 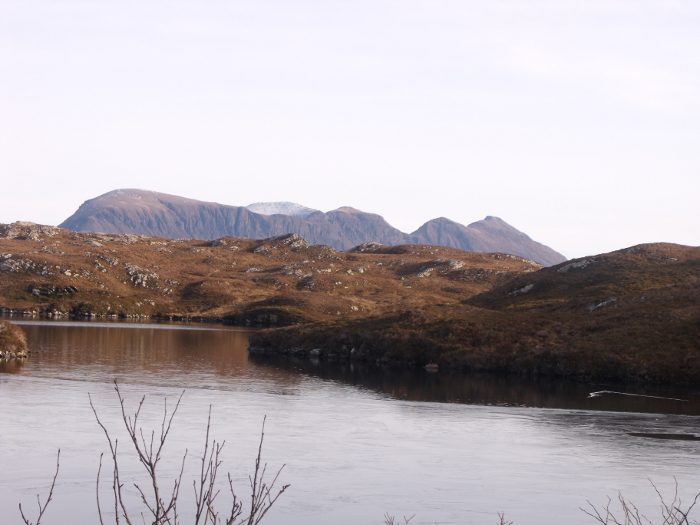 Well, we have at last had a bit of our share of the wet weather which the rest of the UK has suffered this summer – only for us it is far from unwelcome, as you might have gathered from previous posts!! We had a terrific thunderstorm the other day – which is a fairly unusual occurrence up here – and it reminded me of an excellent saying in Gaelic which would describe the rain we had exactly. It goes: bha tuil ann a chuireadh earbaill às na h-eich – var tooil oun a hoor-ugh na herabal as na haych is roughly how it sounds with the “ch” pronounced as in “loch”, and an approximate translation would be “there was rain which would knock the tails off horses”! In English, we would say “it was raining cats and dogs” which is a bit of a daft saying when you think about it – the Gaelic phrase offers a much more accurate description if you ask me!! I mean, how could it possibly really rain cats and dogs…? 

However you would like to describe it, the rain we had has refreshed things enormously and suddenly the rivers and streams have come to life again. It was a joy to take the slightly longer route down to the Leisure Centre for the last art class of this series – which means that instead of cutting through the woods as I normally would, I walked down past the Culag River which was rushing down to the sea as noisily and as cheerfully as is its normal habit – quite different from our photo in a past blog. Sunday was dry as was Monday which was a perfect summer day – sunny and warm with enough of a balmy breeze to keep the midgies away. I very happily spent the day in the garden, as I’m sure all the keen gardeners of the area did, while the holiday makers must have really enjoyed walking on the hill or having a family day on the beach.

Yesterday afternoon was also fine and reasonably sunny and as it was the first Tuesday in July, it was of course my German friend, Theresia’s “Ladies’ Day” up in Drumbeg. I left in good time as I knew there would be extra traffic on the road – but for some reason every car which came towards me on the single track road stopped for me in a passing place and the one car I was caught behind for a wee while, pulled over to let me by – so in fact, I arrived in plenty of time. Theresia holds her Ladies’ Day come rain, hail or shine! She is totally unworried whether anyone turns up or not – as she says, she is always at home and always has home-baking in the house – but this gathering on the afternoon of the first Tuesday of the month is becoming quite a local institution and on this occasion, there were eight of us. The original idea was to bring along some sort of craft work to do, and this time I did take my knitting and I did take it out of the bag – but not for long! I have to admit that the sight of a lady in the crowd on the centre court at Wimbledon busy with her knitting while enjoying the tennis, has rather inspired me to pick up my needles again – that and the need for a new pair of wool socks for winter! 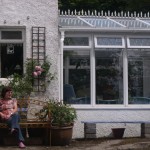 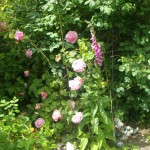 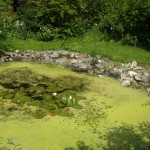 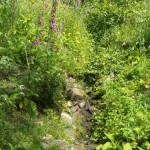 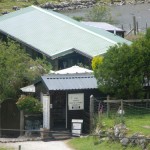 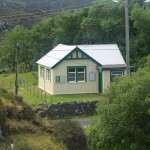 As people turned up, Theresia took them round her garden. Although she and her husband, Heinz, have not lived permanently in Drumbeg for very long, they have owned the house since 2000 and have slowly but surely developed the garden. As she was telling us, they inherited a wilderness and have certainly achieved great things to turn it into a lovely garden. Theresia is the main “ideas” person, and her first step was to create a lot of shelter by planting shrubs which she has now under-planted with her great love, which I share, and that’s roses. Whereas my garden’s nooks and crannies were created by the natural fall of the land, she has had to create such things herself with the carefully planted shrubs – but she has one clear advantage over our garden and that is that the ground around the house was almost certainly either “in-bye” land where the sheep over-wintered, or more likely the “sheiling” for the croft where the crops were grown. Either way, she has a pretty fertile piece of land, which has a reasonable depth of soil and which is set into a bit of a hollow and is therefore relatively sheltered – unlike our garden and many others round here. One interesting feature which she has yet to develop fully is the wee spring which rises in the garden and which used to be a water source for the entire township – hard to believe that now! Just the fact that the house is set on top of quite a steep hill shows you how much effort the folk of Drumbeg had to put in just to collect fresh drinking water, although I’m sure they would also have used the loch – especially for washing.

It was warm enough to sit outside for once, and we gathered in a companionable circle around a table enjoying a beverage and a piece of scrummy apple and almond cake – which I really shouldn’t have had, but really enjoyed as a naughty treat! It was very pleasant in the shade afforded by the trees and so very peaceful. The birds were still intent on getting at the feeder, and the gentle whirring of their wings added to the feeling of peace and contentment.

As we were all girls together, the conversation inevitably turned to weight! I was telling them about the short book I have written on the subject of weight-loss and which I hope will be published on-line as an ebook very shortly. I actually wrote it over a year ago, but it has taken a while for my son, Robert, who is the techno-nerd of the family and who also has a business dealing with such matters, to get it designed and fit for publication. His partner in business and in life, Adeline, who is quite an artist, has now designed the “front cover”, so it really is very nearly ready. Fortunately for them but maybe a bit unfortunate for me is the fact that Robert and his team are all extremely busy just now – but I live in hope that the story of how I lost four stone (56 lbs) and have kept it off for three or more years will soon be out there, and it is my sincere wish that it might help others to do the same. There is so much “foney-baloney” spoken about weight-loss, so much mis-information out there – sometimes sincerely believed, but also often designed just to sell a product – that it is terribly confusing for us normal mortals! But I found a way to get passed all the rubbish and lost all my excess fat, and this book is the story of how I managed it. When Robert has created a web-site for it and got it “out there” for me, a link will of course appear on this site.

It seems a bit strange to say, but there are people around here who didn’t know me when I was fat and can’t imagine me looking any different than I do now! You have no idea how gratifying this feels… 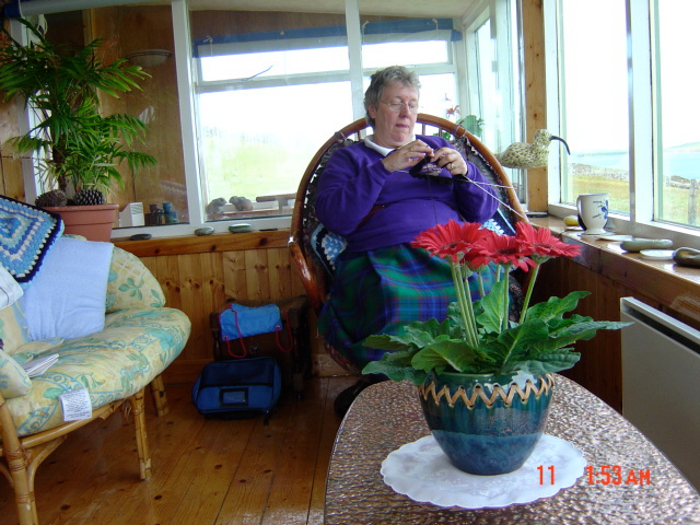 [Photo credits: Photo taken on Orkney in 2006 by Lynne Rettberg; all others by Clarinda]