Of wind and rain 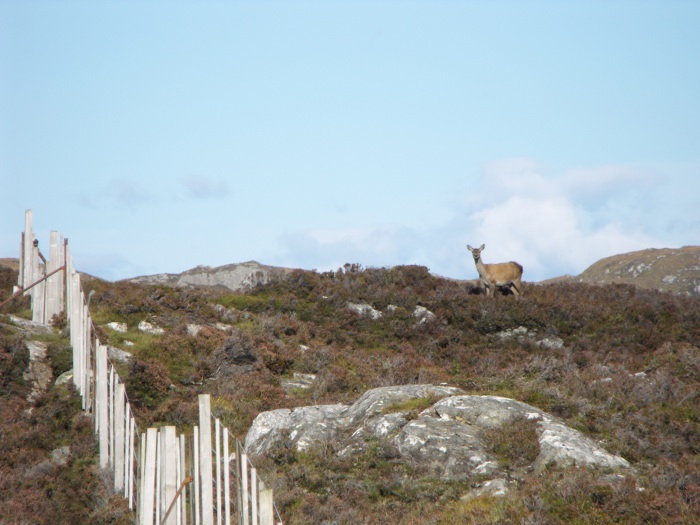 Today I feel compelled to write again about the weather! This is of course the Great British Topic as our weather is usually so very changeable – but recently it hasn’t been very changeable at all, we have had naught but wind and rain. The reason I feel so compelled to write about that today is that it has been blowing an almost gale and has not at any time stopped raining – although I have to say that the Atlantic low which has brought this weather this time only arrived yesterday evening, and before that we had enjoyed a rather pleasant day with spring in the air – I even noticed a crocus trying to come into flower in our garden!

Here I thought I would mention that, not surprisingly and in the way that the Eskimo’s have lots of different words for different sorts of snow, Gaelic has quite a few names for rain – 29 according to a programme I saw on the TV a few years ago – although only a couple are used nowadays. The main word is one known to many, even non-Gaelic speakers, and is uisge (pronounced ooshka) and forms part of the Gaelic word for whisky – uisge-beatha or water of life. When formed as an t-uisge, which means “the water”, it becomes the most commonly used word for rain – tha an t-uisge ann = it’s raining – and that is a very common phrase used in Gaelic, and one of the first that I for one teach!! If anyone asks for a few words of Gaelic, they are the best to give in my opinion. Bùrn is another word for water whence the Scots word “burn” used for a stream comes, but that word is by definition not used for rain! Frasan meaning “showers” is also a word in common use, but unfortunately I don’t know many more – I wish I did! In the rather upside down way of Gaelic, the phrase for stopping raining means “it’s making dry” – tha i a’ dèanamh turadh.

In looking for references for the above and in the hopes of finding more words for rain, I came across a lovely phrase from Wester Ross – the area geographically just south and east of here and which contains Ullapool. Iain Mackenzie, one of my teachers who has had an enormous influence on my Gaelic, comes from Wester Ross which spurred me to buy Roy Wentworth’s huge and wonderful dictionary of words and phrases from Wester Ross – a book which I love. This phrase came from him: bha tuil ann a chuireadh na h-earbaill às na h-eich – raining cats and dogs is the normal saying in English, but the Gaelic translates as “rain that would put the tails off horses”! Although I would normally connect the word “tuil” to flood, here I guess it is used for rain and maybe accounts for one of those 29 words!

I love such phrases and one which is the favourite of my wee Gaelic group has more to do with the wind – “shèideadh e na h-adharacan de ghobhar” = it would blow the horns off a goat – which could describe quite well the winds that Scotland has been suffering in recent times!! 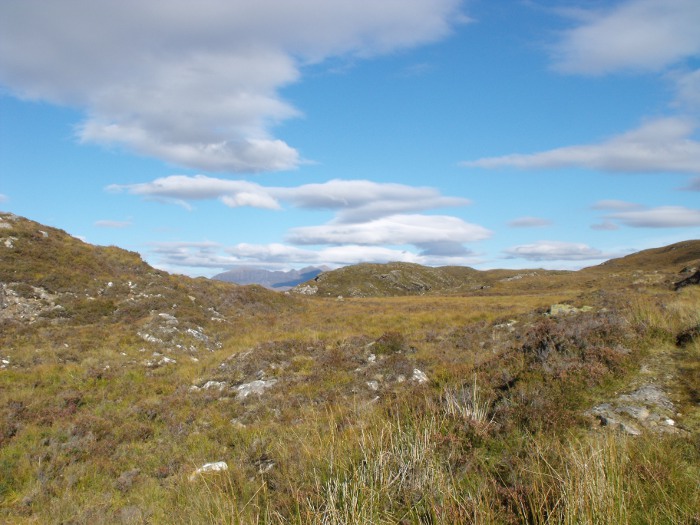 On the subject of wind, while in the States a few years ago now, Chris and I went up the White Mountain in New Hampshire on their cog railway. The mountain stands at 5,000 feet which is of course taller than any mountain in this country albeit not by much, but the highest wind ever recorded was recorded on its summit. What interested me about that was the fact that there was little sign of the effects of high wind until we got quite a long way up the mountain when the vegetation started to remind me of home. Without the heather of course as it doesn’t grow there, but the trees became very stunted and there were prostrate juniper and other such plants growing beside the railway – the landscape started to look very familiar with bare rock and moss. At the top, there was nothing growing at all, but it was hard to say whether there should have been or not as there was a thundering great concrete building at the summit, which was rather a disappointment to me used as I am to the tops of our mountains being mostly left as nature intended – but that I guess is another story… Further down the mountain and in the valley, the trees, mostly conifers, grew straight and tall.

Contrary to what a lot of people think, we do have tall straight trees round here. Sitting here in our sitting room, I can look out at the pine trees we have growing on the bank beside the drive. They are maybe not as tall as such trees can grow, but they are certainly straight and pretty bushy in spite of the fact that the prevailing south-westerly winds funnel up through a gap in the hills straight on to them. We have quite a few trees surrounding our grounds, all planted by our neighbours, Pearl and Kenny-John, when they owned the property. They are a mix of pine, willow, downy birch (probably self-seeded!) and hawthorn – all trees which grow here naturally. In the famous hurricane which hit our coast in early 2004 and caused the tragic loss of a family in the Western Isles and quite a lot of damage round here, we did lose a dozen trees – which is actually the reason why we now have a pond or two in the garden, as the loss of the trees created a perfect space for a pond and the tree stumps form part of the structure. Here I should mention quickly that we don’t suffer from honey fungus up here – my sister is always slightly amazed that we can leave tree stumps as features in the garden! 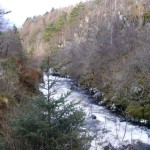 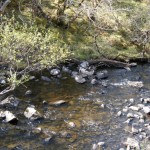 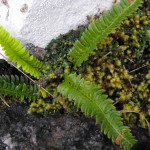 Further inland and in the bleaker parts of the countryside, there are definite signs that nature has to adapt to fairly constant windy conditions and there are very few trees that grow to any height. The amazing thing is though that where there is any form of nook or cranny, any cleft in the hillside or a stream with a slightly wider bed, there you will find trees growing – mostly downy birch. Any slightly more sheltered hillside where maybe the land is not so steep, trees will form a bit of natural woodland with grass growing under them which in turn provides a bit of decent grazing for the sheep and deer, who keep the grass short and therefore tidy! The trees are often home to lichens and mosses, and with the silvery trunks of the downy birch (which is similar to silver birch but not quite the same), and especially if the sun is on them, these naturally occurring bits of woodland are truly beautiful – especially if there is a rushing stream running through them. Such patches of sheltered woodland are not uncommon round here.

There are quite a few woods which have been planted by various landowners, and also the Forestry Commission. We owe our own community wood to one of the Dukes of Sutherland – second I think. Around the community owned Glencanisp Lodge, the trees grow really quite tall and there are oaks growing happily down there – well, it is very sheltered and is one of our “midge heavens” in the summer months. Down the similarly sheltered glen of the Broom river there are six beautiful, tall Wellingtonia trees planted in pairs along the road. Across from them is the arboretum at Lekmeln which has appeared in one of my previous posts. 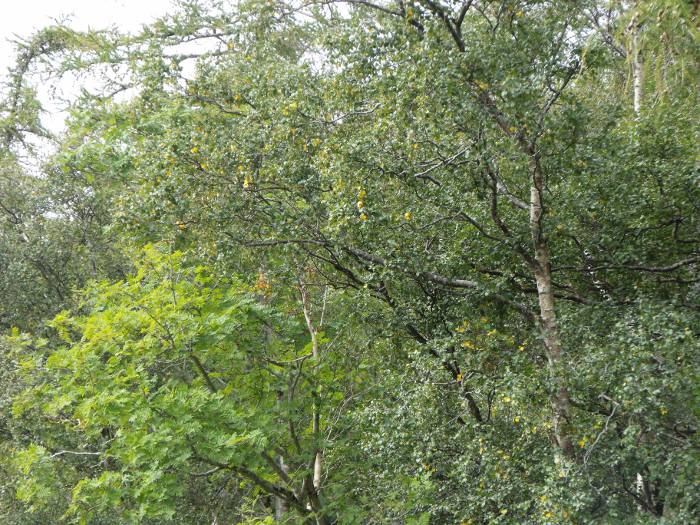 So you see that although we get a lot of wind, we also have a lot of trees. This was quite a factor in choosing to live here. When our boys were starting secondary school we did consider moving to Orkney, but the fact that they really don’t have trees rather stopped us going. Neither of us would be happy where there were no trees – and as for wind and rain – well I don’t mind either…

This entry was posted in Landscape, Plants, The elements and tagged Gaelic. Bookmark the permalink.