There was that feeling of peace charged with anticipation when I walked on to the Games Field at 8.30 that morning – the second Friday in August – the sort of feeling I used to experience when I took my goats (and boys!) to Agricultural Shows, and we camped over night in anticipation of the early “full udder” inspection before milking our animals ready for the show proper. There would be just a few people around, and the feeling of peace was almost tangible. Thus it was when I arrived down at the field ready to do my bit to help in the Craft and Produce tent. 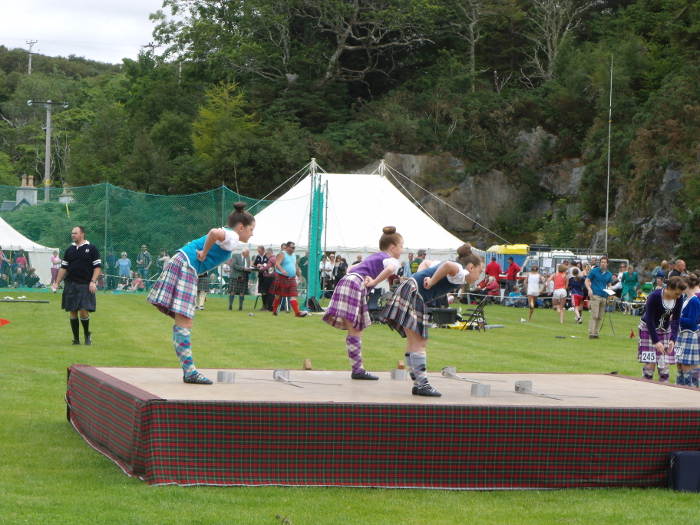 A team of us had been down the evening before to set things up – tables had to be covered with paper and we pinched the benches from the gym to provide upper shelving on most of them. It was a good job that Julie had organised us into doing all this the evening before as tables seemed to be as rare as hens’ teeth and we had to raid the Village Hall, borrowing a couple of ancient but sizeable wooden trestle tables. Even then, the amount of space did not look adequate, but we went home in hopes…

Soon after the 8.30 start the competition entries started to arrive – and continued to do so until well after the final closing time of 11.00 am! It was, as always, a smooth running team – two people receiving the entries and giving them their numbers and tickets on which the letter indicating the appropriate class was also written. The entries were then passed back to us and we attached the tickets and lovingly placed them on the requisite table. There was a large space reserved in the centre of the tent for the children’s entries, and it seemed at first as though they wouldn’t get filled – but they did!

I have never seen so many superbly decorated cup-cakes and the flowers were beautiful – their scent filling the space. As always, the craft table was well filled, with socks and scarves hanging from an improvised line. There was far too much competition of the highest standard in the photography section for my contribution to get anywhere, never mind the art! The class with least entries turned out to be the home-made wine – strangely enough. As things had to be placed in some sort of order for the judges, we started having to do a lot of shuffling about to try to find room for everything and we even had to go and beg another table – thank you for that Liam! Eventually, we had to use the tables which we were using to receive the entries to help spread things out a bit when we managed finally to close the doors! The amount of stuff was truly amazing – especially considering that only one entry per person into any particular class was allowed – and I was certainly surprised at the number of vegetables considering that we have not had a very good growing season this year. But there again it has to be said that there are some very good gardeners among us…

Somewhat belatedly, though, everything was done and the tent looked superb. The doors were then shut for the judging to begin – I would have hated to have to choose between so many wonderful entries. The band of helpers were released to do whatever we wanted until 3.00, when we were asked to be back to help with the auction of those entries – which basically comprised the fruit, veg and baking – which had been donated to sell in aid of the Games. 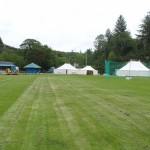 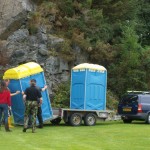 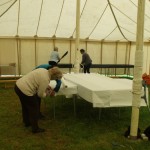 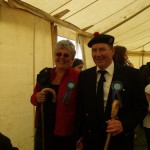 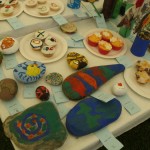 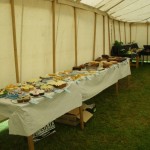 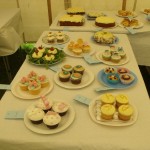 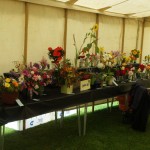 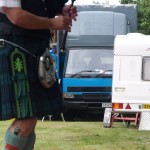 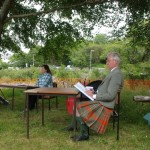 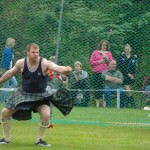 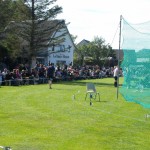 I knew that the Games Chieftain – unusually there were two this year, the husband and wife team of Graham and Katherine “Taffa” Anderson – would be arriving by boat as they traditionally do at this juncture, but this always coincides with my favourite part of the Games – which is the pibroch competition. The Gaelic word “piobaireachd” (pronounced much the same as the English word) just means “piping”, but the word pibroch has come to refer to the “classical” piping music – the “ceòl mòr” or “great music” which is the older repertoire of laments and salutes. The “light music” comprises the marches, strathspeys and reels familiar to anyone who has ever heard a pipe band or a piper playing on a street corner in Edinburgh – which drives my son who lives there totally mad as he is not a great fan of the pipes 🙂

As I was an audience of one (!) for the pibroch part of the piping competition – most other people being gathered at the other end of the ground listening to the speeches – I was able to beg a much needed chair from Linda Morrison, who was running the competition which took place in a quiet corner of the ground under the shade of a couple of big trees. I took a cup of coffee from my flask, and settled down to listen – trying to take note of the variations, tuarluaths and crunluaths – and just enjoying the music. If it wasn’t for the fact of the children’s rides in full view and the sound of the speeches and what-have-you wafting its way over the Tannoy from the other end of the field, it would have been very romantic, but in spite of these distractions at times I was able to be whisked away in my imagination to ages past and a highland castle, listening to the music of the pipes floating down from the battlements! Well, that is maybe a bit whimsical, but I’m glad to say the Great Music is still around to be enjoyed – albeit mostly played for competition purposes. Personally I just love it, and even Himself enjoys putting on a recording of past masters of the genre. It is the ceòl mòr that I am studying with Sandy, my wonderful piping tutor who is making sure that my old, stiff fingers and brain get round my grace notes in a proper and correct fashion to make me the best piper I can possibly be – which is not saying much, but I enjoy it!

There were four pipers taking part in this section of the piping competition this year. The competitors have to submit three pieces and the judge chooses which they should play for him. The days have gone by when it could happen that if the judge chose a piece that the piper didn’t feel was up to scratch, he could salute smartly and say “not today sir” – nowadays the competitors have to be ready to play whichever piece the judge decides he wants to hear.

The solo piping was held up for a short while as the Pipe Band marched around the field. Normally, it is the Ullapool Pipe Band which comes up to grace our Games Day. This is largely made up of children who go to the secondary school there – the Àrd Sgoil – and which of course could include children from Assynt – but this year they had gone off to the World Piping Championships in Glasgow, and a band from the east side had kindly agreed to step in. Unfortunately I didn’t manage to find out whence they came – but they appeared to be a mix of adults and children and they looked fine in their traditional Highland rig and played splendidly. After the band had done their stuff, the pibroch resumed until lunchtime. I didn’t stop to watch the light music part of the competition, which included some young pipers in the junior section and which was much better attended, the audience enjoying the music in the warm afternoon sun – but still without any chairs!!

Having had a bite to eat, I wondered around the Games field watching the various races: the dancers, the “Heavies” throwing hammers, weights, cabers, etc. in the middle of the field – and doing a fair bit of chatting! On the peripheries, there was also the casting competition, a long jump and the throwing of a weight over a bar – height rather than distance. Although there were not so very many trade stands this year, there were the usual rides for the children; stands for the RNLI, John Muir Trust and the sale of raffle tickets; a tent wherein you could make a pot for the princely sum of £4; and of course the beer tent! The Assynt Highland Games always manages to fit a lot in a not very big space… 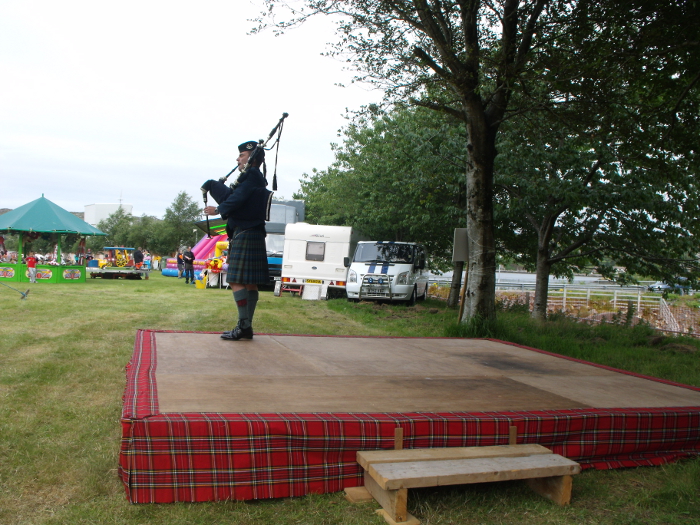 This entry was posted in Local area, Social events and tagged An Gearannan, Highland Games. Bookmark the permalink.