Of strange Gaelic signs and the Mòd 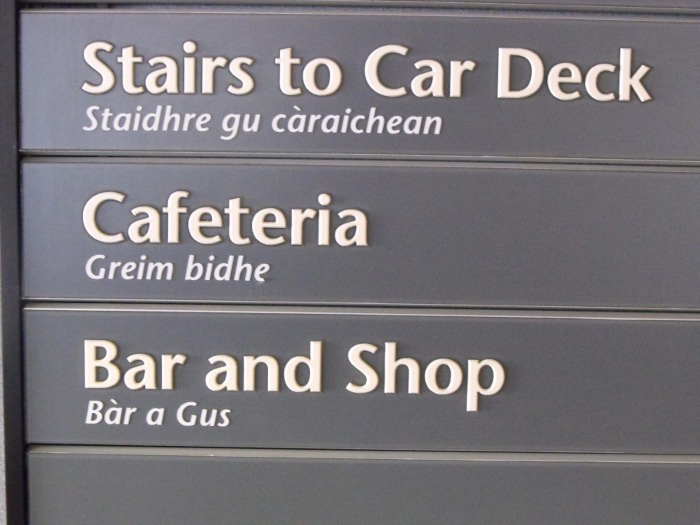 I thought I would start today with this sign – photographed last week on the ferry, the Eilean Leòdhas, while travelling over to Stornoway from Ullapool to take part in this year’s National Mòd.

The thing about this sign is that the bottom line is nonsense! The rest of the Gaelic on the sign is perfect, but on the bottom line someone has had a complete aberration. The thing is that the word “agus” means “and” and what someone has done is taken that word, split it into “a” and “Gus” and left off the word for shops which is “bùithtean” – well that’s what I would say, there are other ways of saying the word for “shops”. The bottom line of the sign should therefore read “Bàrr agus Bùithtean”! I know the ferry carries many a Gaelic speaker to and from the Western Isles, a place which is a bastion of Gaelic speakers; many of the crew are native speakers and I myself have travelled on the boat many times without noticing that sign and its silly mistake. I have to wonder how many people walk past that sign on a daily basis without noticing what is written there!

Anyway – that is an aside. The main topic this week has to be the Mòd, which was in Stornoway this year. For those who may not be so sure, Stornoway is the capital of Lewis on the north-east coast of the island – you frequently see the town named on weather maps for some reason. The Mòd itself is a celebration of the Gaelic language and the culture which goes with it. It is far from stuffy and backward looking – the competitions do include medals for traditional singing and poetry, but there are also competitions for new works as well – songs, poetry and recitation. The pipes and the clarsach also have their competitions and children form a large part of the proceedings – which is why the National Mòd always falls during the two-week Mid-term Break in October so that the children can not only take part but also have a holiday.

Unfortunately though, the timing does mean that the weather is frequently not so good! This year the weather formed a notable part of the proceedings, and there must have been some people who were unable to get across in time for their competitions as the afternoon sailing from Ullapool was cancelled on the day before we left on the Wednesday, due to the gale which was blowing. Also the sea was running from the north – not a comfortable direction in The Minch, which made our crossing decidedly rough. A lot of folk were up-chucking, but I managed to hang on to my breakfast – just…!

We got to Stornoway about lunchtime, and the bus which we were going to use for the next couple of days was ready and waiting for us thanks to Margaret, who is the sister of the son-in-law of Cath, our chairwoman, and a Lewis resident. We had to go to the council offices to formalise the arrangement, but after a rather welcome rest just sitting on the bus waiting for things to happen, we were off down the road to Gearranan where we were staying – about a 40 minute drive from Stornoway on the west coast. There is much to be said about Gearranan, so I will make that the subject of next week’s blog.

The choir competitions kicked off on the Thursday as usual with the Port-à-beul – or mouth music. These are fun, nonsensical songs written to dance tunes and, for the purposes of the competition anyway, consist of a strathspey followed by a reel joined into one song. In this competition, we were up against all the choirs – both the rural and the big city choirs. For the afternoon competitions, these are separated and we were competing against local choirs – some big ones but some which fielded the same sort of numbers as us – in our case 13. Unfortunately for us, these other small choirs had a nice balance of men to women – as I’ve mentioned before, our tenor line is all female just now (although we have got a new male just started with us) and one of our basses had to pull out at the last minute due to family difficulties. As Lisa, our choir mistress, says there’s life and then there’s the choir – this is just a hobby! We were all very grateful to Piotr – our remaining bass – for not pulling out when the going got tough. Last year, the Rural Choirs competition was held in a church which was lovely, but this year we were on the main stage under the spotlights and in front of a big audience – and that was a bit scary!!

We were of course last in both competitions – we expected no less, but I personally was a bit disappointed in our marks this time. Last year, in Thurso – which was our first Mòd – we actually got better marks for Gaelic than one other choir, but this year the marks were not so good – maybe with good reason, I have yet to see the adjudication papers. I dare say all will be revealed at our next meeting on the 2nd of November. (Anyway, we still have our fond memories of the Sutherland Mòd!)

I did have one personal triumph in that I passed my test for the silver card in conversational Gaelic. These tests are run by An Commun Gaidhlealach and take place every year at the Mòd. Now all I have to do is work to pass the test for the gold card, and then I can really call myself a fluent Gaelic speaker!! Maybe next year, but more likely in a couple of years’ time…

Most of our choir took the ferry back on Friday, but four of us stayed on for the Massed Choirs on the Saturday. Ruth, the bus driver, was one of those who went back, so we had to rely on the service which the organisers of the Mòd had laid on. Cath had pre-booked a bus for Friday to take Susan and the other Ruth into Stornoway early on Friday morning – and the driver, Kenny, turned up on the dot to take them in. I stayed in Gearranan on the Friday as I didn’t want another late night. Kenny brought Susan and Ruth back at about 10.30 pm and was there again bright and early next morning to take us in for the Massed Choirs. Normally, the choirs parade through the town to the skirl of the pipes, but this year it was just chucking it down – cats and dogs weren’t in it! – so we had to resort to the contingency plan of having the event indoors at the Nicholson Institute – which is the secondary school for Lewis and Harris. It was a pity as I totally enjoyed the parade last year through Thurso and singing out of doors – there is film of this from last year to be seen on YouTube – but I enjoyed this year’s final event of the Mòd just as much but in a different way. For one thing, last year they had forgotten to provide us with a sign to march beneath, and we had to improvise one – we were quite upset about being forgotten – but this year there was a proper, numbered sign ready and waiting for us.

The only not so good thing about this year’s Mòd from my viewpoint was the catering. As I said, last year in Thurso was our first go at the Mòd, so I have no experience to compare it with, but in telling people about it I have always said how fantastic the catering was – every time one turned around, someone handed over a plate of sandwiches!! There were trays and trays of well-filled sandwiches made with both brown and white bread, with fillings of all varieties one could wish for, and trays and trays of home-made cakes and scones – there must have been an army of women (and men I’m sure) slaving over them for hours and hours. Last year’s Mòd was the first for Thurso and was basically the brainchild of Raymond Bremner, a well-known figure in the Gaelic world, and one which I am sure could have charmed trays of food out of rocks and stones!! It is traditional to provide sustenance in the form of “soup and a piece” after the Massed Choirs event to send people on their way, and both this and the Mir ri Mòr concert were held in the British Legion hall where, as I say, the food passed all expectation. This year the soup and pieces were provided in the school and although the soup was very nice with six choices, the pieces were a only a white bap with rather sparse fillings compared to those of last year, and biscuits which had come from the shop. There was no food at all at the Mir ri Mòr concert – we couldn’t decide whether that was on to the Mòd organisers or just cut backs at the BBC!!

I seem to be going on a bit! Suffice it to say now that the voyage home was much better than the one going over. The ferry was completely full, but Cath had found us seats in the bar, and in no time the aforementioned Raymond was seen trundling past with his keyboard and the party began! There were fiddlers and a chap on the accordion, people dancing where they could find space and of course the choirs that were left giving full voice to the songs we know and love. The journey went in a flash – as Susan said, we had hardly left Stornoway before the lights of Ullapool welcomed us home.

This entry was posted in Choir, Social events and tagged choir, the National Mòd. Bookmark the permalink.