Our younger son, Timothy and his partner, Kelly, visited us for a long weekend over the recent Bank Holiday. I have to say that they were really lucky with the weather because although not all that warm, it was certainly dry and at times quite sunny! I have been reading a book on crofting methods in the Highlands which was written in 1945 by one Fraser Darling, which is I gather quite a well-known work. I was reading last night that in his experience, May and June were the driest months of the year in the Highlands and Islands, followed by wetter weather in July and August, which is of course the time when the midgies make themselves felt around here – they prefer warm, moist air. I have to say that I agree whole-heartedly with Mr Darling’s assessment, as that scenario seems about right to me almost 70 years on! This year though has been a bit different in that it has been an extremely cold spring, one of the coldest on record. Personally, I don’t see “global warming” or “climate change” in this. More I see Nature doing what Nature does – natural cycles as it were. 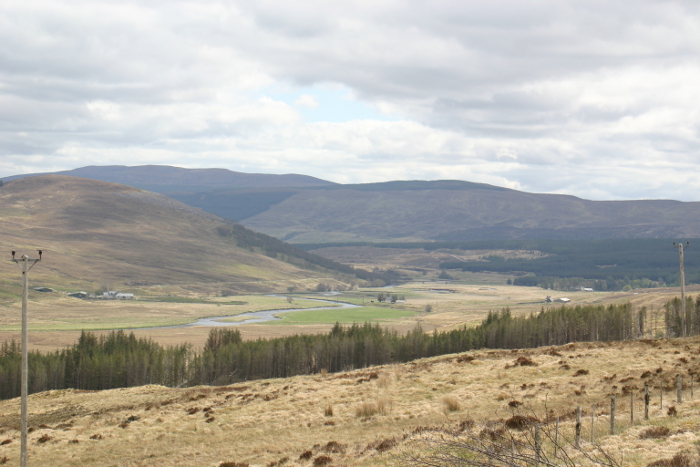 However, as you might expect, things are catching up on themselves and the trees are now in full leaf, and the late spring/early summer flowers have now taken over from the daffodils in our garden. The apple blossom is superb and there are many bees around to work it, but whether the apples will have time to ripen when they do set remains to be seen. At this time of year, we would normally be thinking about the “June drop” of the excess fruit! The bluebells in the garden are as pretty as a picture just now…

The delay in things getting going does have some advantages, and so it proved when the Young Ones and I took a trip over to Raven’s Rock Gorge on the Friday of their stay. The woods looked absolutely gorgeous with the fresh early leaf on the trees and fresh green growth under foot, and there wasn’t too much foliage to obscure the views. This makes for better photographic opportunities if nothing else 🙂

Ravens’ Rock Gorge is not too far from us. We took what Himself and I have always called the “top road” as it runs roughly parallel with the main road to the East Coast, but further north. To get on to it, you would drive straight on instead of turning right to Ullapool going south, and the road quickly becomes single track. It runs past Loch Boralan and the Altnacealgach Inn and wriggles its way due east, crossing the water shed just before the views open out over beautiful Strath Oykel. Up there, we stopped and had a bite of lunch and enjoyed the view down the strath before carrying on towards Rose Hall and our destination. 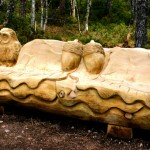 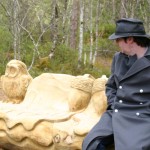 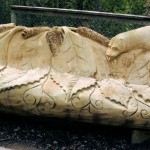 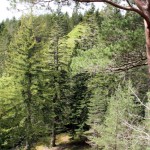 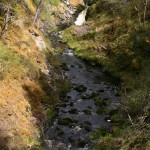 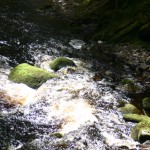 Lyn had recommended this walk to us, and we were all very glad that she had! Last year, when Timothy and Kelly visited at Easter, we had taken a walk along from Culkein beach and Timothy had hated it! Never mind that it was wet and chilly, it is a fairly rough walk with no proper path, and he really didn’t care for that! The path at Raven’s Rock Gorge is rough in places, but it is a made-up and maintained path and because it had been basically dry for a few days before hand, it was easy and comfortable to walk.

Unlike the woods at Abriachan which mostly consist of pine trees, this is a mix of native broad-leaved trees and larches, with just a few pine trees. There is a properly made area for a few cars to park and a discrete (and necessary!) information board. Apart from that, the only interference, as you might say, of man over nature in this wood is the path itself and a couple of viewing platforms, which were very sensitively created so that visitors to the wood could view the gorge itself. Set in these viewing areas were superbly designed and carved benches which were not only wonderful to look at, but very comfortable to sit on! I will not attempt to describe them, but leave you to look at the photographs. I have no clue as to who the artist is who created these benches but whoever it is, they are a superb crafts-person. As well as being very artistically and imaginatively designed, they are superbly well finished.

The path makes a circle, and we opted to go upwards first as this is recommended as being the easier way, although in my experience on the hill, it is often easier going up a rough track than down! But maybe that has more to do with age, I wouldn’t like to say for sure 🙂 The track up the way is very civilised and that is where the viewing platforms are as you climb up the hill overlooking the gorge. Then the path starts to go down the way and becomes more of a rough track, but with banisters to help in places and bridges over the most difficult bits. When we got down to the lower levels, the alt slowed its mad rushing in places, and there was a pool with a bit of beach at the lowest end of the path which was excellent for skimming stones. This is something in which both Kelly and Timothy take pride, and a lively contest ensued!

By this time, we were well ready for a cuppa and so took ourselves back to the car, this completing a very satisfactory round trip. Turning right out of the car park, we stopped at Badnafluich as there was a sign for eggs for sale. We needed a top up on the eggs front, so went to get some at the gate, and to our surprise and great pleasure, there were not only hens but guinea fowl eggs available to buy 🙂 None of us had ever had a guinea fowl egg, and I have to say that they were delicious but had very hard shells. You had to give them a good whack to break them for the frying pan! As we also had goose eggs in the ‘fridge bought from Anna’s croft, it was rather good to add these wee eggs to the box, the biggest and almost the smallest as it were. I should have taken a photograph!

After a bit of toodling around and asking directions of a very pleasant woman in Atlass, we found what we were looking for which was the wee café and gift shop set in the woodland at Rose Hall. I hadn’t been there for about 10 years, but I was very pleased to discover that it hadn’t changed at all! We sat outside in the pleasant, wooded garden and were entertained by the owner’s Black Labrador, who was more than happy to clean the plate of the last of the ice cream I had enjoyed. The tea, coffee and piece of chocolate cake which Timothy had (I think he would have been most disappointed if there hadn’t been any chocolate cake on offer!) were excellent and the hour or so we spent just relaxing there made a proper and fitting end to a most enjoyable excursion… 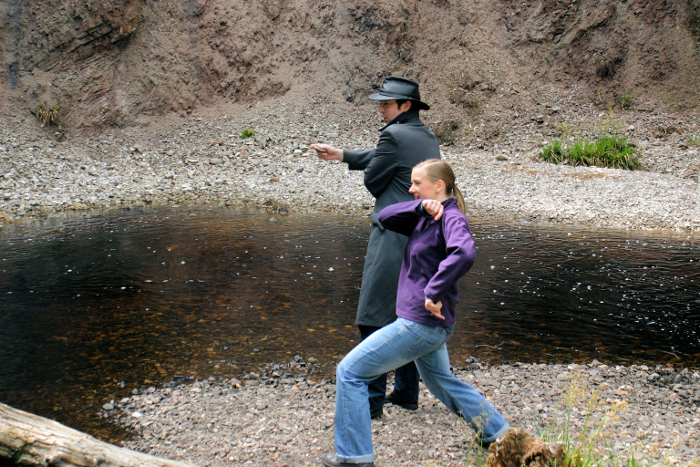 This entry was posted in Family, Local area and tagged Raven's Rock Gorge. Bookmark the permalink.