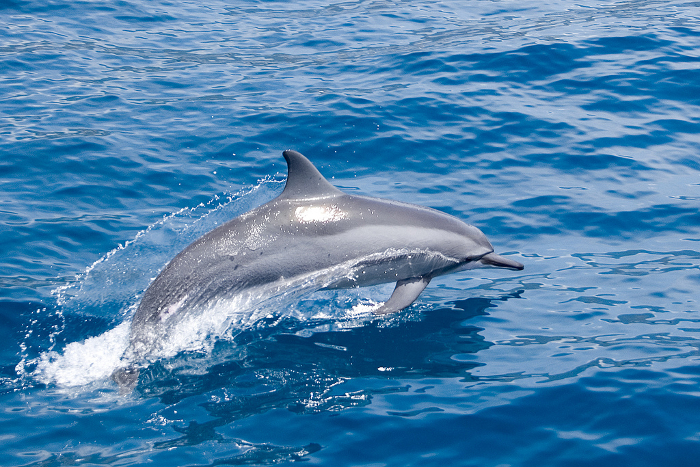 On the Sunday before last, the Sunday Sketching Club met at the end of the mole in Lochinver bay. There were three of us, including Mary our instructor, and naturally we all painted different things! One looked out to sea, one painted the boats tied up in our small marina, and as for me, I looked inland. As I am trying to learn both to draw and how to make things look as though they are in 3D on the paper, I decided to have a go at drawing the Kirk which stands on the main street in Lochinver. Here is my attempt at it – of course in real life, there are buildings on the other side of the road and a car park just alongside it – but I put it on its own wee island as what I wanted to draw was the Kirk itself. Well, it ain’t real good art – but I enjoyed doing it! 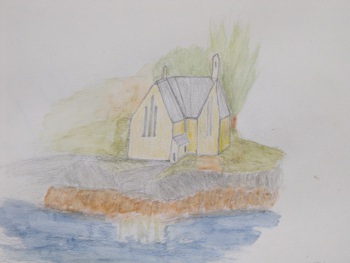 That particular Sunday afternoon turned out to be beautiful after a rather uncertain start. The sun was out and we sat together relaxed and basking in one of those rare, windless days. We weren’t the only ones enjoying the weather. We were visited by an obviously fairly old bull seal which had been hanging round the harbour for a day or two. He kept popping his head out of the water and looking at us! He was obviously scenting us – he would put his head back, open his nostrils and suck in our scent. I really never knew that seal scent other creatures in that way, but of course they are mammals and do spend quite a lot of time out of the water, so I suppose it really isn’t so very surprising. He was most certainly trying to make out what we were doing….! He would then dive again and we would lose sight of him for a bit, but then up his head would pop again in almost exactly the same place! I just wish I had my camera!!

Seals are fairly common around here – in fact there is a wonderful old tub of a boat called “The Statesman”, owned by Willy Watson who is quite a character and has a wonderful line in daft stories to keep his passengers entertained! The Statesman trundles up and down Loch Glencoul a couple of times a week during the summer taking tourists in search of the seals who come into breed on the small islands in the loch – which is a sea loch but also has fresh water running down into it, so parts are quite brackish but it is fresh water up towards its head. We get both common seals and grey atlantic seals here.

Another marine mammal which I have personal experience of is the Minke whale. We were out on the “Summer Queen” going out from Ullapool to the island of Tanara Mor, when we found ourselves surrounded by a small pod of five or six whales. We were able to watch them for some time, but with the Minke, all you really see is the dorsal fin as it just breaches the water to breathe. Not very dramatic, but an experience all the same. A slightly more dramatic whale encounter was related to me by my friend and neighbour, Wilma, who was born and raised in this area. She told me about being out on the open sea in quite a small fishing boat when they were suddenly surrounded by Killer whales! She said that she was really quite frightened – not that the whales would in some way attack the boat, but that they might accidentally be knocked over – and I can see that it would be quite a traumatic experience to be quite so up close and personal with Orcas in some numbers – although I so have to admit to quite a bit of envy! I would love to be frightened in that way – so long as I lived to tell the tale… 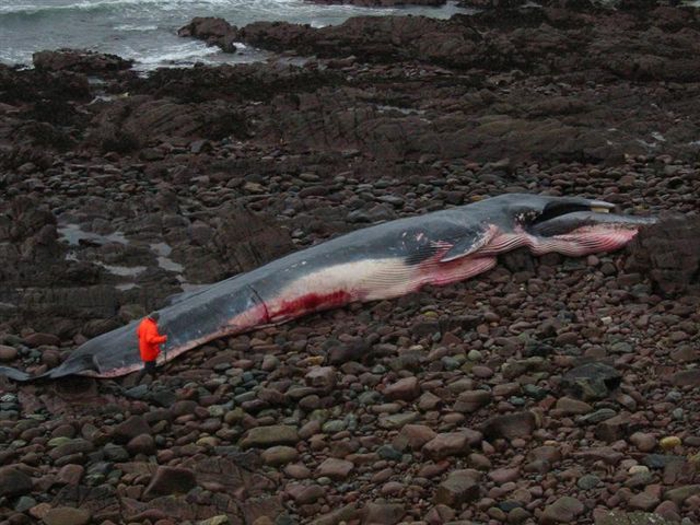 Unfortunately, the only other time I have come across a whale of any sort was a few years ago when a dead Fin whale was washed ashore at Raffin. I was in two minds whether to include a picture of this poor creature with this blog post, but I decided to as it gives a good idea of its sheer size! The person pictured standing next to the corpse in the orange waterproof is Howard who is a wee bit over 6 feet tall – the whale measured 61 feet!! Naturally, a post mortem was carried out on the whale, and it would seem that the poor creature probably drowned having been entangled in a net – probably a trawl. They had to cut open the gut to release the gases or there would have been a massive explosion with bits of whale spread over the local townships; so when they did, the primary school children were invited to come and watch – a hands-on biology lesson if ever there was one. I heard that only one of them was sick, and that was the smell – they were otherwise fascinated by the whole thing! The whale was then left to nature, and a combination of gulls and weather soon took the flesh off the bones – which were then removed by various people who had the boats to come and get them. Whale bones make very interesting garden features!

Dolphins and porpoises we have in reasonable numbers in our waters – although the only time I have seen them was a school of common dolphins swimming around the boat when we went across to St. Kilda. I was in the cabin feeling just a bit sea-sick and the other passengers were all enjoying the forward rush of a fast boat on the after deck where there was seating. I was the one to spot the dolphins as I was facing resolutely forward!! The skipper slowed the boat and we watched them for a while – but then some of the other passengers started to feel queasy as the boat was wallowing rather – so we left them to their own devices! My friend, Susan, who not infrequently travels across to the Outer Hebrides, says that she has seen both dolphins and whales out in the Minch, but as yet I haven’t seen any – only sea birds.

We do get other forms of marine life that are not mammals! In fact our waters abound with all sorts of sea life as the water is both cold and very clean. Basking sharks are among the more common, although the other sort are occasionally seen – again normally when they are washed up dead. A large Hammerhead was washed up about two or three years ago – unfortunately I missed seeing that, but I did see some photographs. I have also handled a not only dead but frozen leather-back turtle! They come up here from Florida in the summer following the jelly fish – thank you Gulf Stream!

Jelly fish of all sorts abound along our shores – mostly just small things and it is absolutely fascinating to see the different colours and shapes of the fish themselves within their “jelly”. Last year, our Gaelic group was out on Culkein Stoer beach doing a session on Gaelic words for things you find on a beach, when we came across the most enormous jelly fish – it was at least 18 inches across. Unfortunately, none of us had a camera – which is always the way!!

However, that takes us neatly on to the subject of Gaelic. I have promised a Gaelic content to this blog, and I thought this would be a good place to bring some Gaelic words in – namely the words for the marine life I have mentioned above. So here we go:

Mùc-mara (pronounced moock-mara) is a whale – which literally means a “pig of the sea” which seems a little undignified for such a magnificent animal – but probably reflects the fact that they were a food source for Gaels in years gone by.

Ròn – (pronounced much as it is written but with a long drawn out “o” sound) is a seal. There is a lovely Gaelic expression – cho ramhar (ravar) ri ròn – which means “as fat as a seal”, which was not especially uncomplimentary as again at one time, seals were a food source.

Leumadair (laymader) covers both dolphin and porpoise and means “jumper” which makes sense!

Muir-tiachd (mur-chiochk) is a jelly fish – muir meaning “sea”. Tiachd seems to have several meanings and I really wouldn’t like to say where any of them fits in to jelly fish!!

Well, I hope you enjoyed that little excursion into the language of this area…

And as a complete aside to the subject of this blog post, here is a picture of a summer flowering rose – namely Alba semi-plena – which should never repeat, doing just that in my garden! I took the picture yesterday, and the presence of the spider and the autumnal colours in the area around the rose proves that it is indeed flowering now, and also proves to my mind that this year has been a rather strange one on the flowering plants front! 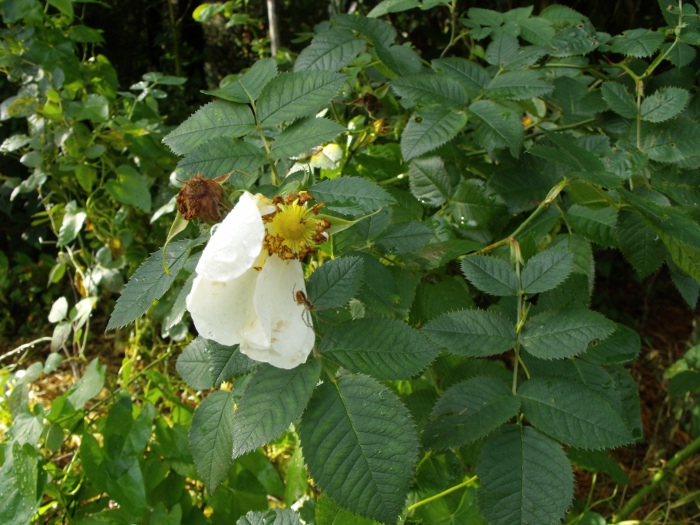 [Photo of dolphin by pochacco20; photo of whale by Gavin Grey; other photos by Clarinda]