Some things pertaining to autumn

But here we are right at the end of November and really and truly I would call this winter! Autumn really does start earlier here just above 58° north than in the rest of the UK – sometimes it seems to start in August, and certainly the rowan trees were pretty well laden with red berries by the middle of September and we all were hoping that this might turn out to be a “waxwing” year. It was what I would call a brown rather than golden season this time but I don’t mean that in any detrimental way – especially as I love brown in all its various shades. I was driving up to Stoer towards the middle of October and couldn’t help but notice that the bracken had gone a wonderful coppery colour which really glowed in the light on that particular day, and this year the larches have gone a rather special shade which I would call “burnt umber” rather than gold. I have no clue as to what all this “brown-ness” might foretell for winter – if anything – but it has made for some wonderful autumnal colour in the countryside! 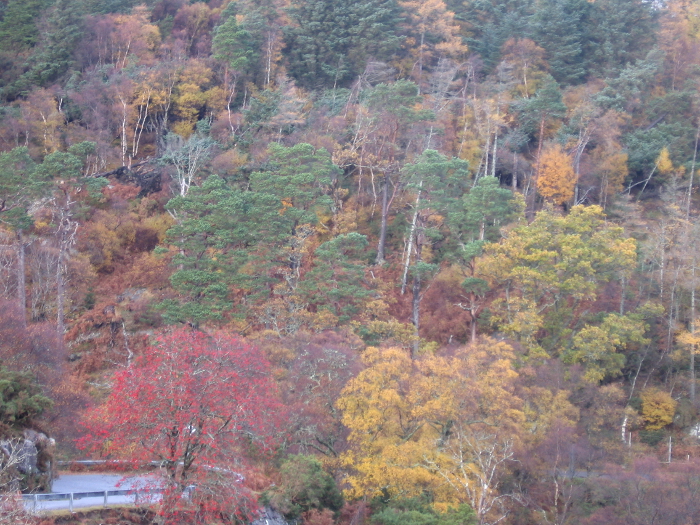 Although we are enjoying our fair share of rain just now, yet again this seems to be the best place in the UK to be – with the possible exception of the south-eastern corner of England! The land here is built for rain – we get lots of it – and it fills the burns and turns the cascades into rushing torrents, and not infrequently the more porous limestone cliffs around Sron Chruibie and Knocken Crag seem just to be leaching water as it seeps through fissures in the rock. Then if the wind is strong in the right direction, the water blows up off the tops of the cliffs in the most spectacular fashion! In fact, and I am not the only one to say this, the countryside comes alive in the autumn when the rivers run high. But they rarely flood…! I really feel for the people in England and the south of this country who have had their homes flooded, especially for those for whom it is not the first time… As with the conditions we enjoyed in the cold, dry spring of this year, all this misery down south has probably been caused by the jet stream moving to the south of the British Isles – which for us means cool, northerly winds. It is definitely a time of year for warm jumpers…

It is also a time of year for warmth and good cheer – and there was plenty of that in Elphin when they held their Winter Market at the beginning of November. They were sensible enough to realise that it was somewhat too early to call it a Christmas Market – although of course, there was Christmas-type fare for sale in the form of Christmas puddings and cakes, jars of mincemeat and that peculiarly Scottish thing, Black Bun. This is an extremely close packed fruit loaf, traditionally cooked in pastry, flavoured with whisky and eaten for Hogmaney. It is in fact surprisingly light, and I used to make it – but nowadays my family are less into the rich fruity stuff, and enjoy more of chocolatey fare:-) Himself and I went down the road to Elphin for about 10.30 – only to find that we were much too early and so went on into Ullapool for a quick shop in Tescos and to the Cèilidh Place for a cuppa. It was unfortunately a rather misty day with low cloud and intermittent rain, and it turned out to be impossible to get a shot of Cùl Mòr from the road to illustrate the optical illusion of the right hand “pap” being higher than the left – something which I had been hoping to do!

The clouds did part for long enough for me to get a not too good pic of the “Old Man”, a stack protruding from the mountain which you can only see from certain angles – in this instance from the road into Elphin. I have no idea whether this stack has a name – I would be very surprised if it doesn’t, but as yet I’ve not been able to find what it might be. These stacks are normally called “Old Man” or “Something Point” as in the Devil’s Point in the Cairngorms. The Old Man of Hoy is probably the most famous example of such a stack – in this instance in the sea – especially since it was first publicly climbed in the ’70s by Chris Bonnington – at least I think it was he, please let me know if I am wrong on that one! We also have our own quite well-known sea stack which is smaller but just as well formed – The Old Man of Stoer. Actually though, the original and proper name for these stacks is not “The Old Man” – which is “Am Bodach” in the Gaelic – at all, but is “Am Bod” – which is that private body part which men of all ages possess and which perfectly reflects the shape of a stack! The Gaels of old were not prudes, but the Victorian mores of the 19 century map makers lead them to “clean up” the names. As I think I’ve mentioned before, body parts feature strongly in the Gaelic landscape. 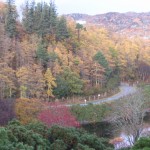 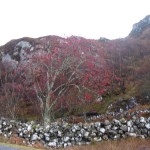 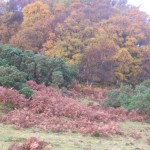 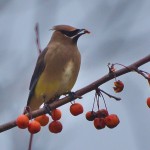 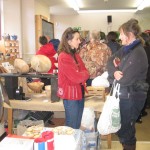 Still, I digress – as usual and especially when I get on to the subject of Gaelic, which is something which I am sure you all know now is very close to my heart. When Chris and I eventually got to the market in Elphin, they were just brewing the mulled wine – which, although we didn’t partake, smelt wonderful and certainly added to that atmosphere of winter warmth and cheer. We didn’t stay long, but went straight to the stall we wanted, which was the stall selling Polish provender hand-made by the wife of the proprietor of the Eddrachillis Hotel. Her’s is the best Polish sausage ever and I am looking forward to next Saturday when, all being well, I will catch up with them again at our own Christmas Bazaar in Lochinver… (see post on last year’s bazaar).

The November Field Club meeting was built around an excellent talk from one of our own members, David Haines, on the subject of bird migration. It was a bit of a last minute decision on my part to go to this meeting, but I was very glad I did! David’s talk was fascinating, and very lively as well as informative. Except that I knew that birds migrate at this sort of time of year – mostly to fly south for our winter – I really didn’t know much about the subject. At least, I had thought I knew more than I did!! It had never occurred to me before that although swallows breed here in the UK, when they fly down to South Africa, they are welcomed there as the first sign of summer’s arrival in the same way as they are here!! Some birds seem to fly enormous distances, but others maybe migrate just a few miles – following the food supply. And yes – this year really was a “waxwing year” 🙂 David showed us some brilliant pictures of these colourful birds, and he said that someone must have sent them the message that we had rowan berries – their favourite food – in profusion this year because they hopped straight over to here, missing out their usual stop on the east coast completely on their migration from the Scandinavian countries! How could they have known? Who can tell…

I was busy bemoaning the fact that I had never seen a waxwing, but was assured that they were around in their hundreds in the Strathan/Badnaban area! So next day I took myself off down the road, binoculars in hand, to try to see one. Well, I saw not one sign of them – although I might have heard them chattering away. However, I did meet Jeannie out on a foray for things rustic for her garden, and she said she would let me know if the birds returned to Badnaban. Well, she was as good as her word, and on the following Sunday the call came and I rushed over in the car to experience my first tree-full of waxwings. How satisfying was that…!

[Photo of waxwing by jeffreyw; all other photos by Clarinda]

This entry was posted in Landscape, Nature and tagged autumn. Bookmark the permalink.