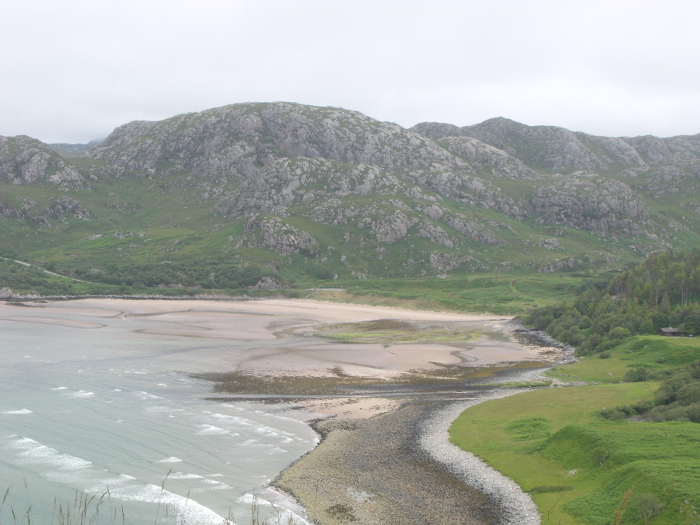 When we woke up on Sunday last it was pouring with rain, but it has to be said that a wee drop of precipitation has never prevented the hardy members of the Assynt Field Club meeting for one of their summer programme of field trips – and anyway, the forecast was for an improving picture! So, Gwen and I met at the Glac and set off south to meet the others at Gruinard Bay beach car park. We were in good time, which was just as well as we drove straight past the rendezvous and were well on the way to Poolewe before we realised our mistake and turned back! By the time we pulled up, most of the people who had decided to brave the weather and come out for this meeting had already arrived – the last one to turn up being Melanie Gaff, the local ranger and our hostess for the day. And it had pretty well stopped raining… I was put in mind of the old adage which was one of my grandmother’s favourites “rain before 7, sun before 11” – well we didn’t see the sun that day, but basically the old saw held true for us last Sunday.

Bruce suggested that rather than starting the walk from the beginning of the path, we should cut across a large field close by which was full of orchids – and how right he was! Fortunately, there was a style via which we could scale the fence and in no time at all our noses were pointing downwards identifying the various species of orchid as well as a variety of other wild flowers. However, Melanie did in fact have a plan for the day, so we had to tear ourselves away from the field and take to the path which runs along the river and up to the waterfall which we could see in the distance a couple or so miles away, and where we were hoping to stop for lunch.

Before setting off, Melanie took the time to tell us a bit about the area. Gruinard Bay and the land surrounding it belong to the Gruinard Estate, which was bought in Victorian times from the Mackenzie family which is still the largest landowner in the area. Gruinard Estate itself still belongs to the same family and is run on very traditional lines as a hunting/fishing estate. Gruinard is not a Gaelic name but comes from the Norse – the Vikings having ruled this part of the north of Scotland and the islands for quite a few centuries back in the Middle Ages. Many place names round here are actually Norse, as are quite a few mountains etc, and some are even Gaelic translations of the Norse as in Glas Bheinn – Grey Mountain – near here.

Gruinard Island, which stands in the bay, is also famous – or maybe infamous – as being where, during World War II, biological warfare tests were carried out. The island was seeded with anthrax and for very many years has been out of bounds for any living thing! Recently, it has been re-tested and the all clear given, but I’m not sure whether many people trust that the anthrax germs have completely gone! There is still a military presence in the area – there is a “secret” base just down the road going south where large signs advertise that access to the area is “forbidden under the meaning of the Act” – which is how they always advertise secret bases – and the Navy has a base round the headland from Gruinard Bay in Poolewe Bay. There are not infrequently interesting boats and ships to be seen parked in the Bay which to my mind doesn’t detract from the inherent beauty of the place and can add some interest!! 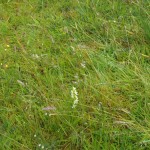 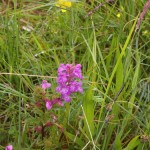 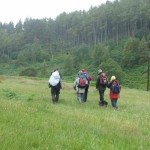 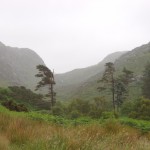 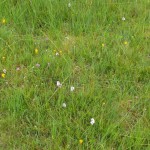 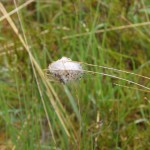 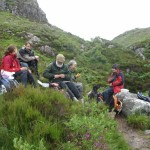 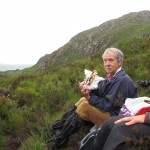 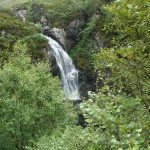 However, that’s not what we were there for this particular Sunday Having joined the path along the river Inver Ianvie – which is rather a strange name in Gaelic and I think, having looked it up in Dwelly’s dictionary, may have something to do with birds or perhaps weasels!! Melanie did tell us that there are several theories as to what the name might mean – none terribly satisfactory – but no-one really seems to know what it is. Whatever the origins of its name, though, it is a very pretty wee river. The path, though clearly defined, is evidently not much used by human feet and we had to push through quite a lot of tall, very wet bracken for a few yards – but we were all well protected by waterproofs and shortly found the effort well rewarded as the ground opened out and there were more and more interesting plants and grasses, and loads more orchids. Here the rare Lesser Butterfly orchid was growing in such profusion it was quite difficult to believe that it is very rare in other parts of the country – although one gathers not in Scandinavia where it is common enough that it isn’t deemed necessary to offer it the protection it enjoys in this country, where all forms of orchid are protected by law.

As often happens on these expeditions, we were making very slow progress There was just so much of interest for the botanists, and Bruce was delighted to make a first record for the area of a downy mildew on a tormentil plant. But time and tide wait for no man – and neither did my stomach which was beginning to rumble! So we chivvied the botanists along and got up to the falls – the Eas Dubh or Black Falls – where we found the perfect spot for a picnic.

Suitably refreshed, we headed back towards the beach taking a slightly different path, one which took us higher up the valley and which was quicker going. The botanists still had a chance to do a bit of botanising, but all in all the road back took a lot less time and as the tide was now going out, we took to the beach in the hope of seeing the sea eagles which had been quite regularly spotted over the bay. 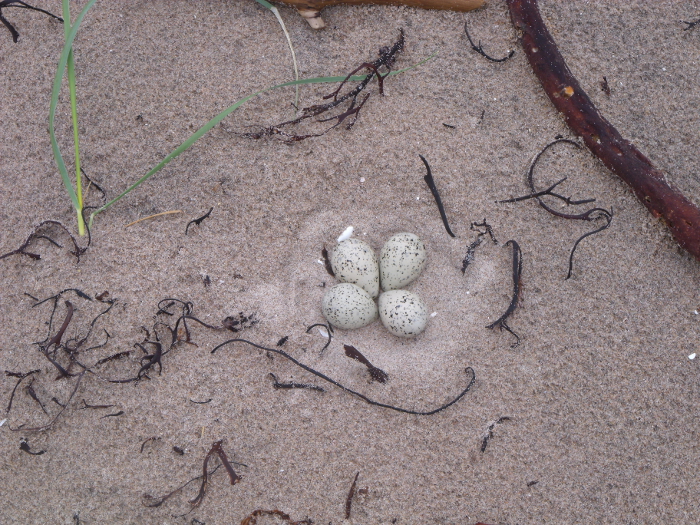 Our first sighting, however, was on the strand – a Ringed Plover nest. Unfortunately, and as Richard (an Ullapool resident who had joined us for the day) pointed out, this is a very disturbed beach – at which Bruce suggested that we should organise a psychiatrist for it (well, I guess someone had to make that comment) and we felt that the nest may already have been abandoned. It was true to say that, apart from a few noisy oystercatchers and one or two blackbacked gulls, all of which were airborne, there was very little birdlife on the shore-line, as tends to happen on the more popular beaches. However, Andy did bring his ’scope down and we were busy investigating a large but disused buzzard nest set a wee way up the cliff on the edge of the bay, when the cry went up that a sea eagle had been spotted out on the horizon – and to our joy, there were in fact two! They were not easy to make out even with binoculars – but they were certainly there and we watched them until they disappeared behind the lump of Eilean Fraoich Mòr.

Although it actually wasn’t very late, we decided that as we all had quite a long drive back, it was getting time to depart. Just as we were moving off the beach towards our cars, Richard spotted an osprey. This caused great excitement – especially for me! I have seen a sea eagle – last year on Skye – but had never seen an osprey! This one was not only in easy sight even with the naked eye, but it stayed stooging around the bay for some time, occasionally showing us its white underside. That certainly made my day – not that it really needed “making” as I had already had a thoroughly enjoyable and interesting day.

Time was now getting on and we really had to tear ourselves away. Gwen and I drove a wee bit further up the road to see if we could see anything more of the eagles from a different vantage point – but to no avail and we headed home stopping only for ice cream (as is traditional on these jaunts) at the Dundonnell Hotel – and very good it was too… 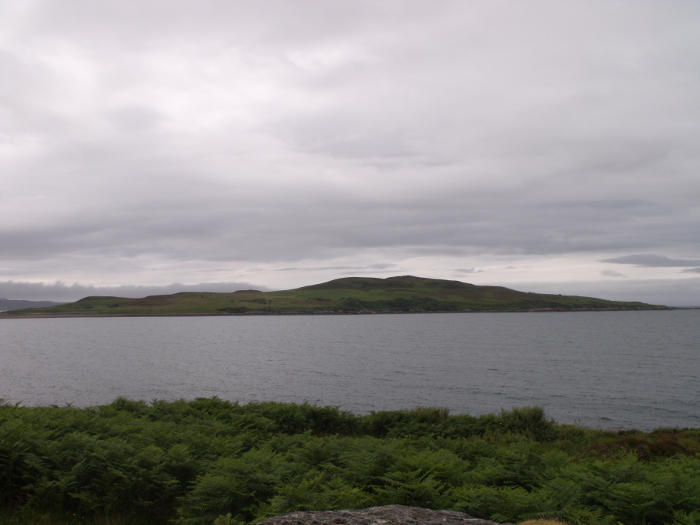 [Photo of “Yours truly” about to tuck in lunch by Ian Evans, all other photos by Clarinda]