Well, here we are getting on for the middle of April, so surely Spring is springing into action at last! It is certainly warmer and thankfully, we have now had some decent rain. The poor old daffodils have barely come into flower before being knocked over by the gale of wind we have had these last couple of days, but that’s nature for you. They still look very pretty, and seem to signal that summer is at last not so far off! 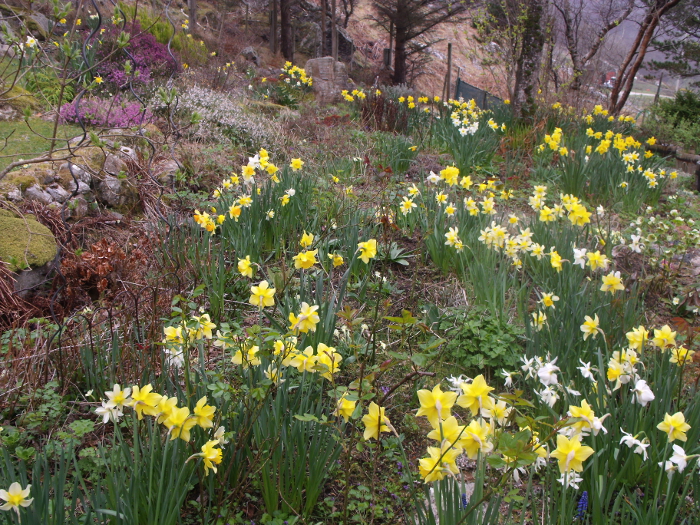 With the warmer weather, I decided that it was probably time to start feeding my outside fish again after their “hibernation” over the winter. I would normally start sometime during March, but this year they showed no interest in their food then, being content to remain very still towards the bottom of their pond. As I walked down to the pond, I could hear this odd noise, but thought somehow that it was our neighbours using some sort of machine; but no – when I got close to the ponds, I could easily see the source of the sound. The upper pond, which is dedicated to wildlife, was entirely covered by frogs sitting, well not on a lilly pad as the water lilly is only just starting to leaf, but on the blanket of pond weed. They were very content sitting basking in the sun and singing their odd, croaky, whirring songs, although they disappeared under the surface as soon as they detected a stranger coming near!

Although there have been frogs coming to our ponds since the moment they were built, which was in 2004 after the hurricane of that year took down several trees leaving space for the ponds, this is the first year I have been aware of their chatter and there is no doubt that the ponds are positively heaving with them – more than I have ever seen before! They are, however, a good month late this year, so it will be very interesting to see how the eggs hatch and whether the tadpoles have time to grow into frogs or whether they will winter over in the ponds as tadpoles. I have had that happen in our dewpond, which is very small and also just for wildlife, and possibly in the bigger wildlife pond although it is difficult to tell in there, but of course the fish in the big pond tend to get to the eggs and recently hatched tadpoles, although some do seem to survive. I like the feeling that my garden ponds which give me so much pleasure also help the local frog population 🙂 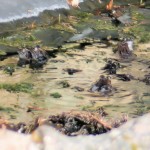 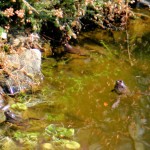 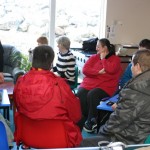 This time of year is also time for the annual lunch held for us older folk; i.e. those of us over 60. It is held just now rather than Christmas, which is probably more traditional, because The Lochinver Lodge is happy to host it now, but is closed at Christmas time. Personally, I really like having a celebratory meal at this time. In a way, it is a celebration of the arrival of warmer weather and all the joys that the end of winter brings, and anyway there is a lot of fun and feasting of various sorts at Christmas-tide, but not so much at Easter. It gives one something to look forward to, and I have been doing just that since putting my name down for this lunch some weeks ago.

The Lodge, as it is known locally, is a great venue! It was built by the Vesty family when they owned a lot of the area, and although it is a rather drab looking building on the outside, it is very comfortable and attractive inside with big open spaces, plenty of comfortable sofas and armchairs in the bar with a roaring fire in the hearth, and a big very light dining room. Being set halfway up one of the hills overlooking the village, it also has fantastic views from the big dining room windows.

We foregathered in the bar area for a leisurely drink before lunch. I quickly found my friend, Jane, and we chatted for a while before “mingling”. I “mingled” over to a table where Nina was sitting and she hauled out a picture of her great, great grandson to show me. She saw a little angel whereas I saw a face full of wee boys’ mischief, and Nina told me that I have no soul, and where young children are concerned, she is probably right 🙂 Between us, Nina and I spanned the age range of the 50 or so people who were at the lunch – at 62 I was among the youngest and at 91 she was among the oldest.

Although I very much enjoyed the company that day, I have to admit that one motive for going is the food! The restaurant at the Lodge is now licensed to Michel Roux and the food is as excellent as you would expect from that famous name. Being the greedy pig that I am, I would never pass on a chance to eat there, although I have to say that I have never had a disappointing meal at the Lodge even before the kitchen was taken over. Although the restaurant generously allows locals a 40% discount in the evenings, it is still too expensive for us to eat there normally, but this occasion was subsidised. I have no idea how but I am grateful to those who organise this event thus giving me the chance to enjoy a really good lunch out with friends and neighbours. Needless to say, my Old Man didn’t join us, but that was his loss 🙂

Last Monday, I went as a volunteer to help at a photography course for those of our community with special needs. This is another of the courses run by Assynt Leisure, and Sharon and Sandra are very busy just now getting another raft of these short courses up and running. Sharon was busy setting up another course when we arrived for this one, I will be tutoring another 8 sessions of Gaelic under the Assynt Leisure umbrella starting this Thursday and also joining a sketching class as a student on Sunday week, and it is more than possible that there are others about which I don’t know as yet! Sharon and Sandra are very busy people indeed raising funds to provide local people with great opportunities not only to learn new skills, but also to meet new people from the community. I gather that Monday’s session, which was again taken by Martin Morrison, a local photographer, was enjoyed by the people and their carers alike and although I wont be able to be at the next session as we have our own craft group meeting, I am looking forward to the session after that. You never know, maybe the weather will be kind and we can get out with our cameras…

This entry was posted in Local area and tagged spring. Bookmark the permalink.