A super Sunday playing with ink…

Last Saturday was due to be the annual Chicken Fun Day in Elphin, which I reported on around this time last year, but the weather really wasn’t awfully good – in fact you might say that it was bloody awful on the day. I think that the organisers would have probably thought it unfair to ask the chickens to race on that day – especially as they don’t like the wind up their “skirts” – well, who would? I did ask Lyn, who had planned to go with Gwen, if they had gone but she said that they had decided that discretion was the better part of valour, so just now I don’t know whether the Fun Day happened or not.

However, although I had planned to go, something else had come up – as is the way with things! Earlier this year during the Art Course which was held in May/June time, Mary had mooted the possibilities of a painting with ink course. She and I had been talking about it for a while as she felt that it would be especially good for me to learn this technique to “free the inner artist in me” – and she could well be right about this. At the time, four of the six of us were very keen to do an inking course and agreed that September would be a good time for it – but getting folk up here to be in the same place at the same time can be more difficult than herding cats, and at the end of the day only Scottie and I were available to do the full day, with Jennifer joining us for the afternoon. With numbers so low, it obviously wasn’t going to be a viable proposition to hire a venue, so we agreed to have a workshop in our kitchen and I would provide food in exchange for the tuition. I was more than happy with this arrangement…

So on Friday and Saturday I was busy making soup etc. We had someone who is a dairy free vegetarian and two of us who are gluten free, so it was a challenge to get the menu right – but it all came together in the end. I did two soups – one veggie and one meat, wheat-based baguette and brownies for those who could eat gluten without regretting it, and gluten-free baguette and blueberry muffins for those of us who couldn’t. Moyra, Scottie’s wife, and Himself joined us round the dinning table for lunch and it was a merry party – although Mary did not allow the socialising to go on for long as we had work to do!!

I had put up a trestle table in the kitchen, thus giving us much more room to work, and Mary set up everything we needed in there and we got going soon after 10 – even before coffee!! The method Mary taught us is interesting and deserves a paragraph of its own. It is a method which has been developed by Elda Abramson, who was a tapestry weaver with an MA in Design, but who came to painting by this method in ink about a dozen years ago. As I understand it, she came to the method after reading a book “A Passion for Seeing” by Frederick Frank. Mary came across it at an artists’ fair when she attended a workshop taken by Elda, and she was so impressed that she went and did a two-day course with her at her home/studio in Eastbourne. As Mary started to describe what we were to do, I realised that it was much the same basic method by which I had first learnt to draw from the book “Drawing on the Right Side of the Brain”. I had used but then discarded the method as being only a tool for learning to draw, not for drawing and painting real pictures – but now I was to learn differently. 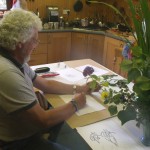 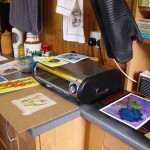 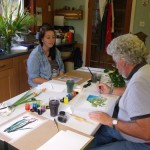 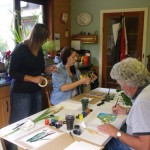 The idea is to awaken the right side of the brain – that which is more to do with intuition and artistic creation. When we are very wee and our brains are like sponges, there is very little difference between the right and left side of the brains, you only have to watch a child draw to realise this. But then we go to school and start to learn how to do things “properly” and the left side takes over. As I understand things, the left side of the brain is more to do with language, decision making, our thoughts, ideas and ambitions – in fact, it is the part of the brain that runs most of our conscious mind functions. The sort of person I am, for instance – very driven by logic and unable therefore to trust intuition very much, very word/language orientated, bit of a control freak – is really rather out of touch with the right side of the brain in many ways. When I was about 2 years old, if we were going out and if I put my rain coat on even if the sun was shining, everyone else took heed and followed suit because you could be absolutely sure it would rain. I wish I had that ability still – it would come in very useful!! That sort of thing is very right side – but for most of us, as life takes over, we lose touch with it. Even artists do – although maybe not quite so much – but when they get to Art School and are taught certain ways of doing things – left brain ways – that becomes that, and Mary said that when she first came in contact with this method, she was very resistant.

What you do is this: you take up an object – in our case we were working with flowers – in your left hand (assuming you are right-handed) and study it. Really look at it, as though you had never seen such a thing before. This method Elda has named “Zen Drawing” because in many ways, it is like practising meditation. After a few moments quiet contemplation of the subject, you seize a pen in your right hand, and without looking at the paper, you start to draw the object. You try not to have a dialogue with it – you don’t want to be saying “this line goes this way” and whatnot, you want to try to get the essence of the object. Then when you feel it is done, you look down at the paper and think “cripes” what the “***” is that!! In fact, to start with, there is normally not much more than squiggly lines on the paper! However, after a few attempts, usable lines start to appear. You are now allowed to look down at the paper to re-place the pen when you finish a line (we were using bamboo – aka rush – pens which were dipped in Quink water-soluble black ink) but then you go straight back to the object, not looking at your paper. If it becomes imperative to put a line in to make sense of the drawing, then you have to place the pen and then “Zen in” the line – without looking! Believe it nor not – this really does work!

Then comes the really fun bit – and that is to make a painting out of your squiggles, which by this time, having had a bit of practice at it, do vaguely resemble a flower. We had the colours of the rainbow to work with, a brush and a glass of water. The inks should be put on the paper fairly wet as they are meant to run into each other and merge with the black ink lines – and surprisingly, it is not difficult to make a pretty good picture quite easily – and it is really enjoyable to do, I could just spend hours messing about with this method!! If you are seriously interested, go to Elda Abramson’s web site and/or buy her videos which explain the method and show her at work producing stunning pictures.

It has very much made me think. I have always thought that “art” should be representational (very left brain

), but now I understand much more Van Gough’s sunflowers and Picasso’s bulls – they were looking at their subjects with their right brains – at least that’s what I think. Old Masters are often wonderful, but nowadays we have photography for representational art – leaving us free to play – and I think it is a very good thing to awaken the right side of the brain… 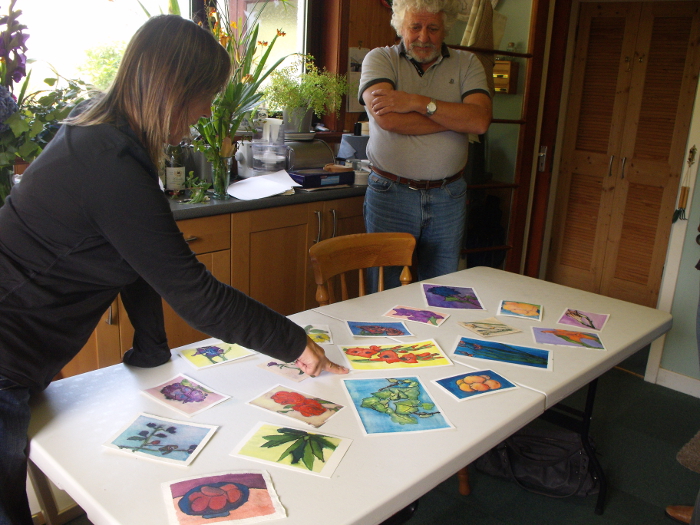 This entry was posted in Social events and tagged art session, drawing session. Bookmark the permalink.