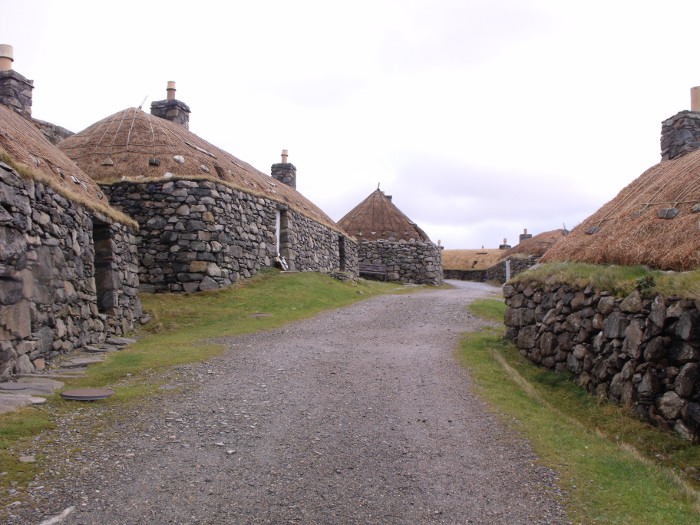 Na Gearannan – àbair aite – what a place!! And what a wonderful place it was for us to stay as a choir – even if it was a 40 minute drive from Stornoway.

Na Gearannan is – or was – a fairly typical north highland/island settlement. A row of taighan tugha – or in English, blackhouses – placed at varying angles down a main “street”, and set into its own wee sheltered glen – or strath – leading down to a stony bay. I think the name “blackhouses” to describe this sort of house came into being in Victorian times because the inside walls are undoubtedly black from the peat smoke from the fires which used to be in the middle of the floor in the dwelling space – something which had held true for millennia in all parts of the world and probably is still in existence in places. In Gaelic, such houses were always known as “taighean tugha” or “thatched houses”, which is a far more accurate description. Traditionally, the family stayed in one end of the house and the other end was given over to a byre for wintering the cattle – thus making milking the cow a much more easy and pleasant occupation! I have heard tell that as fodder got scarce at the beginning of spring – the leanest time of year for man and beast – the cows would take to eating the roof of the house! The manure from the byre would then serve as fertiliser for the shieling where the crops were grown, and every three years or so, the roof of the house would join it and a new roof would be put on. You can actually see this system in progress in the picture below where the roof is showing definite need of replacement. I think in this instance, the building under this particular roof houses the public conveniences!! 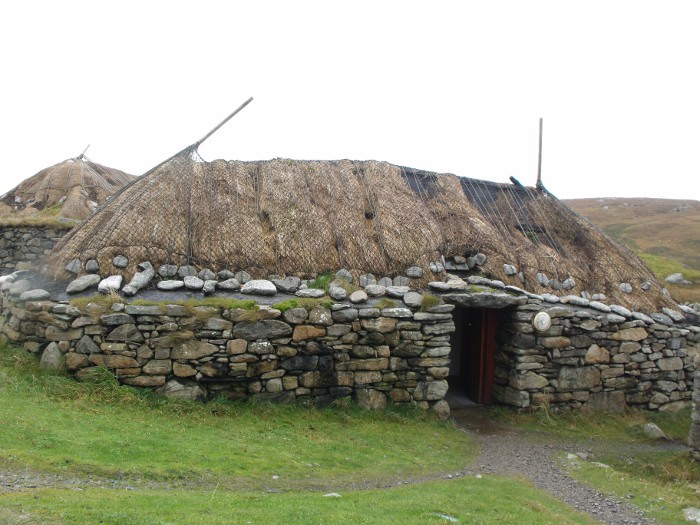 Gearannan is now a museum run by a trust, and is much visited through the year. Some of the old houses have been set up to show how they used to be, but several have also been converted for use as hostels, thus giving the township a new lease of life into the 21st century. This was made possible by one factor that most abandoned and/or cleared settlements don’t enjoy – it was actually lived in until 1974! One house has been set up as its occupants pretty much left it – including a radio of the sort I recognised from my early years and which could possibly indicate that latterly at least, the villagers enjoyed electricity. The end of this house which would have been the byre is now given over to artefacts from a way of life which must have been carried on there for centuries. There are baskets for various uses – i.e. creels; baskets for storing tatties or for carrying peats and such jobs – a warp winder of quite modern manufacture – certainly 20th century – and ditto a loom, which I am pretty sure was a Hattersley – possibly a fairly early example; a spinning wheel of course and other such equipment that would have been used on a daily basis by the inhabitants.

Another of the houses has board displays telling the history of the township in Gaelic and English and they are both informative and attractive. There is also a DVD playing continuously and showing methods of such things as peat cutting and fishing. The film was obviously made a few years ago, but it shows occupations which are still carried on by people in much the same way.

You can see from these houses that although they are completely traditional, built with rounded ends against the wind, they had been “modernised”. No bathrooms or running water of course, but the hearth had been moved from the centre of the living quarters to a properly built chimney and in the case of the one we stayed in, which was probably the biggest in the township, there had been two fire places – one at each end of the house which was evidenced by the chimneys, although only one is still in use. Nowadays a small coal-fired stove stood on the hearth stone and certainly went along way to keeping us warm and cosy on what was otherwise a week of very chilly, wet and windy weather. I have always thought that this sort of house was probably very cosy to live in, and I think this short stay proved that thought a valid one. The only other “blackhouse” I have been in was an hour or more spent in the house in Arnol – also on Lewis. This house had been lived in until the lady who lived there moved across the road into a more modern “white house” in 1964. The house has been left as it was complete with the peat fire burning in the centre of the floor – without it, the house would run with damp!! Of the two houses, I definitely preferred the blackhouse! 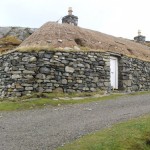 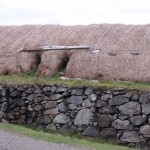 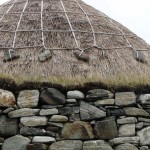 However, this blog site is not designed to be about life in the past in the Highlands – there are many other places to find information about that – so I won’t go on any more about the history of the place except to say that there was a family tree hanging on the wall of the house showing the names of the family who had lived there latterly. It came as a surprise to many members of the choir how long they lived! Most of the people on the short family tree lived to be over 80, and as far as I have read about such things – which is quite a lot! – this was not uncommon. Clean air and water, a healthy if somewhat monotonous diet of fish, especially herring, meat, eggs, dairy products, potatoes, oats and barley which was frequently supplemented with wild birds and animals – marine and land-based – kept the population for the most part pretty fit and working into their 80s.

As I said in my post about the Mòd, I stayed on my own on the Friday and so had plenty of time to explore the set up there. There is no doubt that the people who set up the trust and organised the renovations did a very good job – for one thing, they are not over done. I happened to get talking to a woman from the local area who remembered the township from before the endeavours began, and she told me that in fact the houses were in a state of ruin before work started on them. All the stone used was local and the houses were re-built in the traditional way using a double thickness of dry stone walling, with a turf “gutter” between the two and the roof built up from the inner wall – you can see that in the photographs. I don’t know how traditional the windows are – although I am pretty sure that they did have tiny windows let into the roofs in the way that it shows here. I was amazed how light it was in the house – I experimented by turning out all the lights once everyone else had gone, and I could see perfectly well – although maybe not well enough to read.

The hostel was incredibly comfortable to stay in. The bunk beds were six to two rooms, one at each end of the house, and there was a small room with just two beds which in our case served for our one male, and that room had a washbasin for shaving. There were two loos with washbasins and two small but convenient shower rooms. The living/eating room was a good size and there was a large, modern, well-equipped kitchen – the only thing missing being a cafetière, so it was a good job I had bought my small one with me! Otherwise everything needed for a stay was provided – including towels – and the bunks were very comfortable. They have a website where people can book and I would say that it is well worth the stay – especially for a group. I believe that the other houses are smaller and one may be a self-catering cottage rather than a hostel. We were made extremely welcome there and all of us much enjoyed our stay.

One thing they don’t have from inside the houses is a view! But as soon as you step outside, the view out over the ocean is beautiful – nothing between you and Canada but sea… 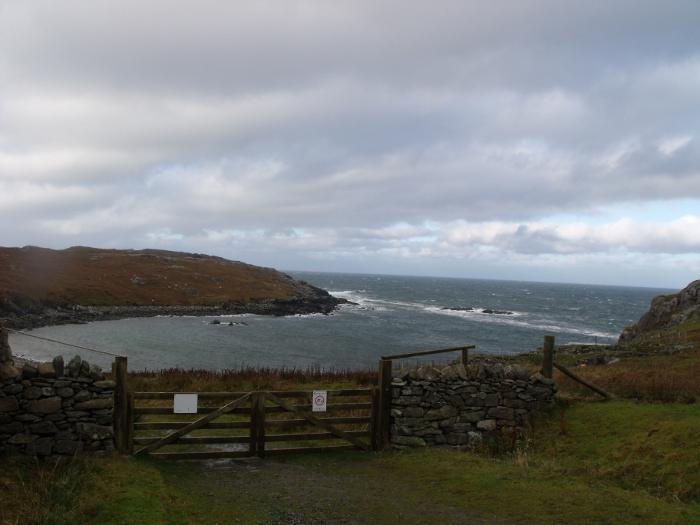 This entry was posted in Local area and tagged blackhouse village, Na Gearannan. Bookmark the permalink.