Of walking by water and historical ineptitude 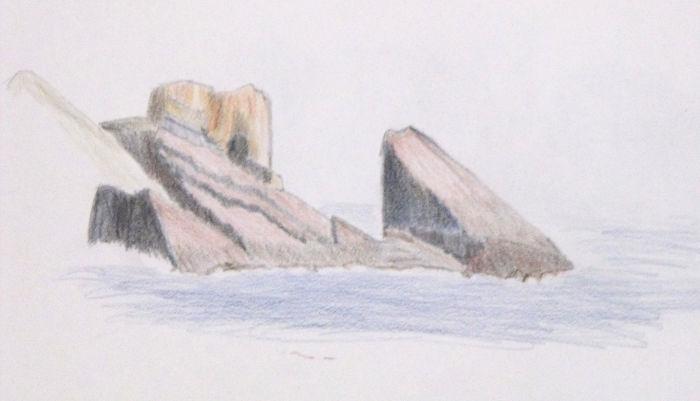 Our older son, Robert, was here visiting for a couple of weeks – he went home last Thursday in time to celebrate his 33rd birthday back in Cambridge with his girlfriend, as is only right and proper. We didn’t do a lot while he was here as all he really wanted and needed was a chance to “chill” and take a break from a fairly hectic existence running his own business down south in England. Well, he couldn’t have come to a better place – for one thing, Cambridge had been the hottest place in the country on the day he left – nearly 30 degrees – which I gather is a record for this time of year, and is far too hot at any time of year in my book. It certainly was nothing like that hot here! Another good reason to come here would be that this place is one which allows anyone just to “chill” if that is all they want to do.

We did do a couple of interesting things. He came along to the Sunday Sketching Club with me when we were out on the cliff-top in Clachtoll drawing the split rock there – and thus giving me yet another excuse to show off an attempt at drawing! The split rock does make an interesting subject and it was Fiona’s idea that we should attempt it on that particular Sunday, the weather being half-way decent – although it got chilly as the sun disappeared behind some high cloud, so we weren’t out for more than an hour. There is a common misconception that the split rock is what gives Clachtoll its name – but I am more than reliably informed that that is not true. The name comes from blow holes in the cliff behind the rock, and although I have never been in the right place at the right time to see the sea actually blowing up through the rock, I have experienced hearing the roaring of the sea below the holes. That makes better sense of the name Clachtoll which means “rock hole” – the word “clach” means rock and “toll” – pronounced towel – means hole.

Robert and I also went for a couple of good walks, the first one in Leckmeln Gardens near Ullapool which is a delightful spot and a lovely place to take a stroll on a slightly wet afternoon. The garden is more of an arboretum and is full of superb mature trees from all parts of the world. It was first established in the 19th century at around the time that Osgood MacKenzie was planting the more famous (and much larger!) garden at Inverewe. Leckmeln fell into a state of neglect but is now being restored slowly but surely. The trees are wonderful, many with strange and fantastic bark, and I am hoping to get there with my sketch pad when the garden opens to the public again next summer. This walk was followed by a most welcome beverage and cake in Ullapool – there is nothing like a cuppa after a wet walk, and although we had in fact only got a bit damp, we still felt the benefit of a warm drink! 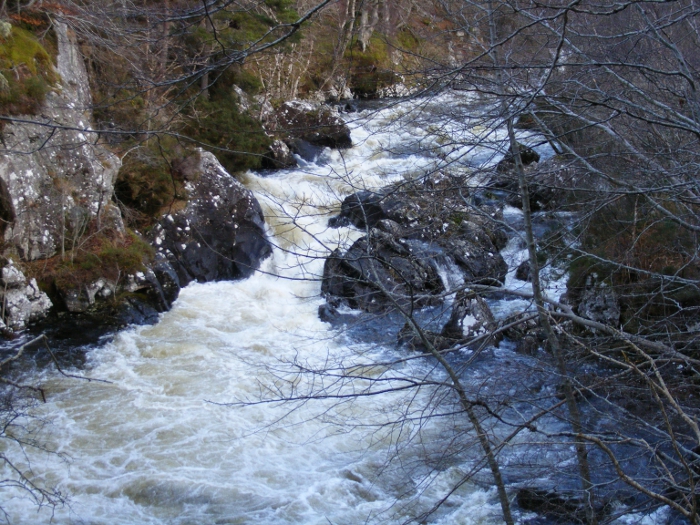 A few days later, and the sun was shining when Robert and I went for a more local walk down the river Inver. Lochinver boasts two rivers, one is the Culag River which runs down from Culag Loch – commonly known as the School Loch as the school is on a promontory in the loch, and which is on our side – i.e. the Strathan – side of the village. The Inver is on the other side of Lochinver and although it is of course in walking distance from our house, we decided to save our energy and drive down to the wee car park by the kissing gate which stands at the entrance to the path. 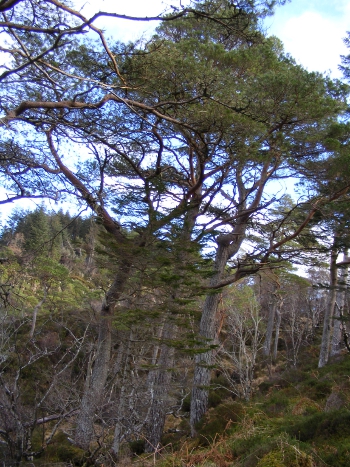 The path is quite a rough one, and was muddy in places as it meanders along by the side of the river which at this point is more of a rapid and was certainly in full spate after the rain we have had. We walked in single file as the path dictated, but conversation would have been impossible over the noise of the river. I don’t know that anyone has ever tried to canoe down this part of the river. Personally, I think it would be a highly dangerous thing to attempt! There are however fishing beats all along the river, and further along where it widens, I think it would rival any of the salmon rivers in Scotland for sheer beauty. The river is decidedly surrounded by trees – a completely natural mix of pine and broad-leaved trees – as shown in our photo here and also in the one at the end of this blog post. This must make life quite difficult for the fishermen, but fishermen there are in plenty along the river. Tucked into a sublimely wooded spot – with a lovely view out over the water – is a wee bothy recently built for the fishermen which I saw for the first time on that walk. I wanted to investigate further, but when I walked up the path which leads to the bothy, I saw it was occupied by a fisherman – his rod and net leaning against the wall outside while he sat inside eating his lunch. I didn’t want to disturb his peace and so crept away.

The track carries on for some distance, eventually circling around to meet the path which leads out from Glencanisp to Suilven, but Robert and I decided to turn back at this point as the sun, which had been brilliant on the water, had disappeared and rain clouds were threatening. It was fortunate that we were well prepared for rain as the clouds broke before we got back to the car. This time though, we decided that home for tea and freshly-made Bakewell pudding was appropriate! Neither walk was all that long, but we both took a lot of pleasure in just quietly strolling along enjoying what nature had to offer.

And now we come to the embarrassing bit of this blogpost…

I asked Brenda if she would cast an eye over last week’s post which was about the Neolithic pottery project. Well, this she has done and this morning she emailed me to tell me I had got the most salient facts wrong! To start with, although I had been told that the broch at Clachtoll was nothing more than a “heap of stones”, this isn’t really the case! As I said in that post, I have never seen the broch with my own eyes and this just goes to show that one should never make comments such as this without being sure of the facts. In fact, and especially given that the broch has been there for a couple of thousand years, it is actually in reasonable condition – although judging from photographs, I don’t think it is in as good nick as the other two brochs I mentioned in my last post, both of which I have visited. My apologies to our broch for using such derogatory language to describe it, and especially apologies to those who look after it.

In her email, Brenda also told me that I had got quite the wrong end of the stick about the reason for the Neolithic pottery making project. It wasn’t connected with ongoing work at the Iron Age broch at all, but with finds from the chambered cairns and tombs in the Ledmore area which are 2,000 years older than the broch and date from the Neolithic era – hence the experiments in the methods used to make pottery in Neolithic times! The tomb excavated this summer is near Loch Borralan. As Brenda so rightly told me in her email to me, it’s a great pity I didn’t manage to get to the digs – for one thing, I would have found it all fascinating, and for another I would have got my facts straight first time around!! 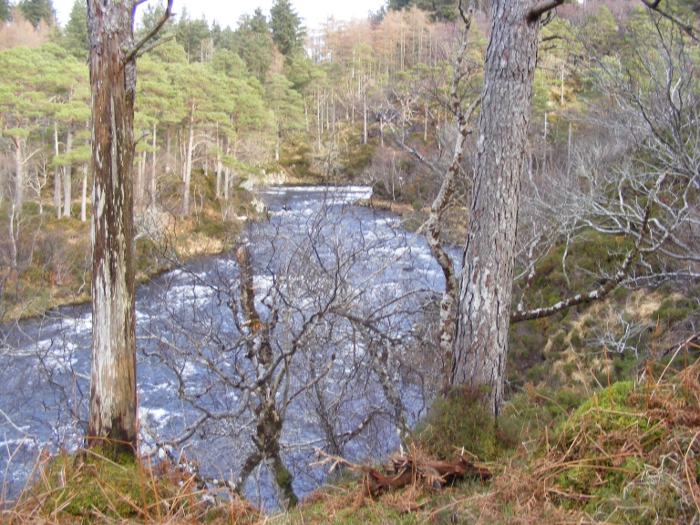